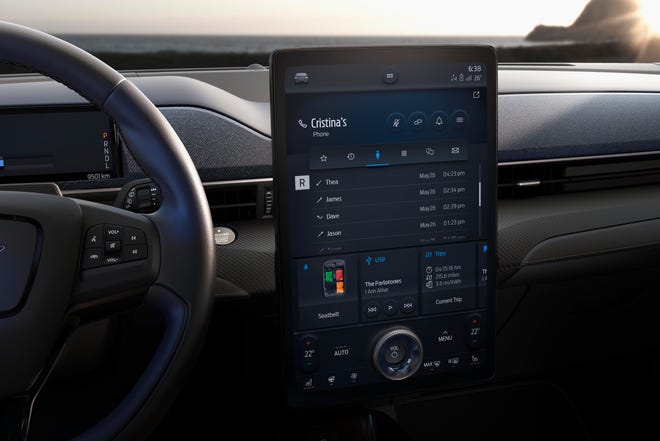 Ford has reintroduced what could now be considered the ‘old-school’ way to control climate in your vehicle. The automaker rolled out its most recent software update this week for the Mustang Mach-E, which enables knobs instead of touch-enabled sliders to control the vehicle’s climate control.

Ford’s Power Up 4.1.2 rolled out to Mustang Mach-E owners this week with various features. However, one of the most interesting was Ford’s choice to enable knob-controlled climate control, where drivers will utilize the centrally-located volume knob to control cabin temperature, fan speed, and heated seats.

“Yes, you did read that correctly,” Ford said in 4.1.2 release notes. “The volume knob can now be used to control the cabin temperature, fan speed, and heated seats. To use these new controls, just tap the temperature, fan or heated-seat screen control once, which will enable control of the feature when turning the volume knob. Then take it for a spin and stop when you reach your comfort zone.”

The decision by Ford to move ahead with the reintroduction of a physical knob to control climate is out of the ordinary for the electric vehicles of the past, present, and future. While some electric vehicle owners have now grown used to the minimalistic designs that automakers have adopted, others have not. Although dials, knobs, and buttons may not fit the mold of the futuristic stereotypes many consumers have held for electric cars, they do offer a bit of convenience.

The knob being used for climate control allows drivers to cool or heat their cabin by simply twisting the highly-accessible adjustor. It will no longer require dividing attention between the task of driving and sorting through various prompts and screens to accomplish this task.

Some may see it as backtracking in interior EV design, but it creates a fast and efficient way to change the air temperature in your vehicle. Turning the air up or down a few degrees should not take more than a few seconds to complete, nor should it take the driver’s attention away from navigating the vehicle by any means.

Tesla made minimalistic interiors mainstream in EVs. Not long after the company started influencing other automakers to develop EVs did we see companies mimic Tesla’s touchscreen-dominated design. While the design is certainly personal preference and differs from one driver to the next, Mustang Mach-E owners having the built-in volume dial allowed the automaker the open-ended option of adding this feature after the vehicle was initially released. Vehicles that have completely axed buttons, knobs, and switches altogether will unfortunately not have this luxury.

As vehicles continue to become more advanced, companies will be forced to spar with the idea that their revolutionary new interiors may not fit the model of “classic” features that many drivers still find useful. Luckily for Ford, the volume knob was an idea candidate for easy climate control, and a simple Over-the-Air software update solved the issue without any true difficulty.