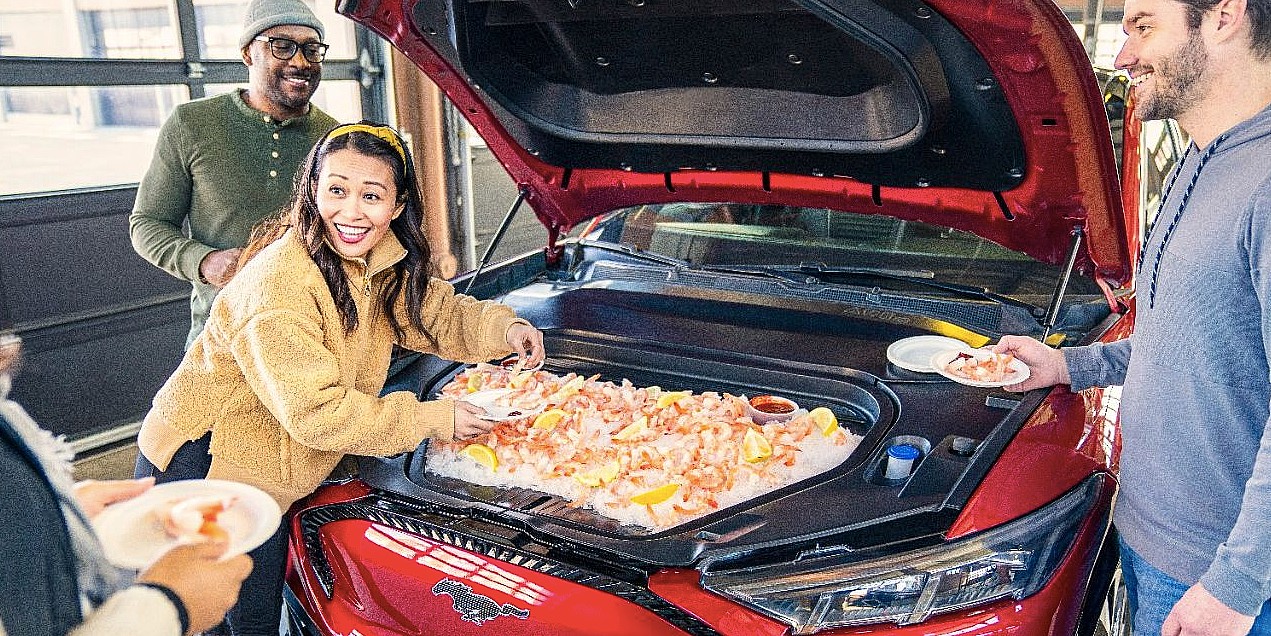 Ford Mach-E frunk is perfect for chowders and chicken wings, and we’re not even joking

The Ford Mustang Mach-E is the legacy automaker’s answer to Tesla and specifically, the Model Y. Being a crossover, the Mach-E is designed for fun and utility, and this is shown in its cool storage spaces, such as its frunk.

But if recent images of the upcoming all-electric crossover are any indication, it appears that the vehicle’s frunk may not just be useful for transporting items and the occasional cooler. It will also be perfect for holding savory snacks and cold beverages for tailgate parties.

The Mach-E’s frunk has just shy of five feet of cubic storage. This may not be as large as the space offered by the frunk of, say, a Tesla Model X or a Rivian R1T, but there’s plenty of room for chicken wings and shrimp paired with cocktail sauce.

In a press release from Ford after the Super Bowl, the automaker stated there are four ways football fans could use the Mach-E’s frunk for storing food at sporting events. But arguably the most interesting way the company claims the frunk can be used is to hold 1,000 regular sized chicken wings.

In reality, it is unlikely that people will pack the inside of their frunk with soup or cocktail shrimp. The only likely scenario is that ice could be used in the absence of a cooler to keep drinks or containers of food chilled. It will be a bit tricky to clean the frunk of grease when the chicken wings are cleared out, after all, and watery dishes like chowder are probably a universal no-no for would-be frunk-gaters.

Not to mention that fresh food and things like windshield washer fluid probably don’t mix very well either.

It seems the aim of many automakers was to try and market their electric vehicles during this year’s big game between the Kansas City Chiefs and San Francisco 49ers. GMC unveiled its first look at its all-electric Hummer in a commercial featuring Lakers superstar LeBron James. Porsche also took a shot at reaching out to those who watched on television by releasing a rather expensively-shot commercial displaying the Taycan.

Ford’s attempt at showing its unique use for its new vehicle’s frunk was certainly unorthodox and different than anyone probably expected. It will be interesting to see how many Mach-E owners actually use their frunks as chicken wing and shrimp cooler when the crossover is delivered to reservation holders later this year.

Ford Mach-E frunk is perfect for chowders and chicken wings, and we’re not even joking