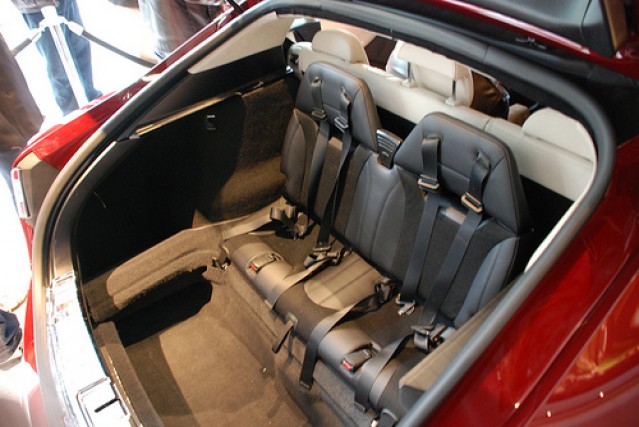 Tesla CEO Elon Musk recently gave a useful air-conditioning tip for Model S units equipped third-row rear-facing “jump” seats. According to the Musk, a trick with the settings of the electric car’s air conditioning system should help keep the rear-most seats that are designed for children as cool as possible.

Musk’s Model S A/C advice was posted on Twitter after Pittsburgh, PA resident Matthew Feinman stated that his kids ended up dehydrated and drenched in sweat after spending around 20 minutes sitting at the rear of the full-sized electric sedan. Feinman also noted that the electric car’s air-conditioning was maxed out during the drive, but there seemed to be no air circulation in the area where his children were.

In classic Musk fashion, the Tesla CEO responded to the Model S driver’s observations, advising that turning off the car’s air circulation can help keep the third-row seats cool during drives. Musk also provided a brief explanation of the airflow design of the Model S’ third-row seats.

“If there is anyone in the third row, turn off air recirculation. Third-row cooling happens by air entering from the front and exiting through the vents in the rear bumper.”

Feinman was grateful for Musk’s immediate response to his observations, stating that the CEO’s air-conditioning tip did not seem to be in the Model S’ owner’s manual. The Model S driver further noted that a nearby Service Center and Tesla showroom were not able to give any advice on the third-row seat air circulation issue either.

Air circulation in the Model S’ rear-facing seats has been a hot topic of discussion among the owner’s community. Some members, for one, have resorted to DIY projects, such as this one featured in the Tesla Motors Club, to improve air circulation in the Model S’ third-row seats. Other Tesla owners have also shared tips with each other to help keep the rear-facing seats cool, such as adding solar screens, turning off recirculation, and driving with Range Mode turned off.

If there is anyone in the third row, turn off air recirculation. Third row cooling happens by air entering from the front and exiting through the vents in the rear bumper.

As we noted in a previous report, the Model S’ rear-facing seats have caused misconceptions in the past. Last year, a Model S owner was confronted at gunpoint by the Newhall, California Sheriff’s Department after getting reported for an alleged abduction. Unaware of the full-sized electric sedan’s seating design, witnesses reportedly believed that the Tesla owner was stuffing a child in the car’s trunk. Fortunately, after explaining the design of the Model S’ third-row seating configuration, the Tesla owner did not receive any charges.

Lt. Rob Hahnlein, one of the officers who responded to the alleged kidnapping, admitted that the misunderstanding happened because they were not aware of the Model S’ design.

“It was not a kidnapping. We’re not Tesla experts. The new Teslas have a weird back seat and when they put the (child) in the back seat it looked like they were putting them in the trunk,” the officer said.