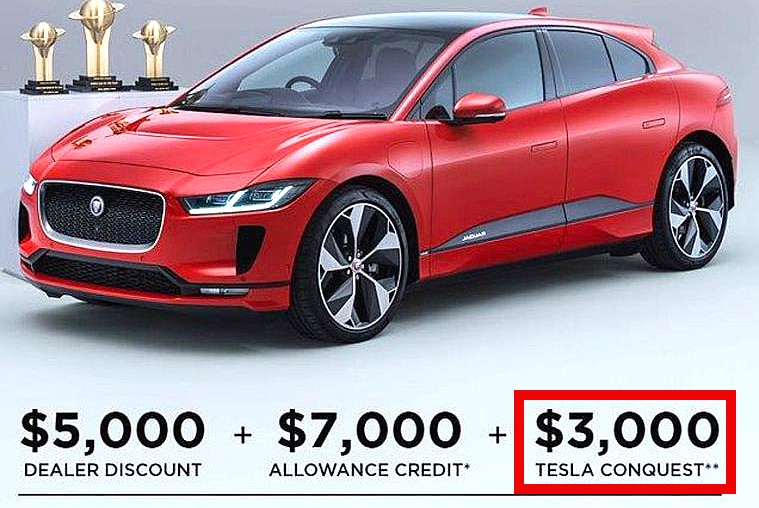 With the electric vehicle market in the United States practically being dominated by the Tesla Model 3, veteran automaker Jaguar appears to be putting some effort into pushing its own premium all-electric vehicle, the I-PACE. Among these efforts is a rather unique marketing campaign that has started making its way through social media, highlighting potential savings of up to $15,000 from the I-PACE’s MSRP.

Based on the advertisement, the $15,000 total savings will be comprised of a $5,000 dealer discount, a $7,000 “Allowance Credit,” and an additional $3,000 “Tesla Conquest.” The ad, which could be viewed below, explains exactly what the I-PACE’s “Tesla Conquest” incentive entails.

“For an owner or a member of an owner’s household where a Tesla vehicle is currently registered (proof of ownership/registration is required). Limit one incentive per eligible VIN. Can be used towards the lease or purchase of a new, unused 2019 Jaguar I-PACE. No trade-in required. Not redeemable for cash. Incentive paid to dealer and requires dealer participation.”

Jaguar’s target demographic of choice is quite interesting, to say the least. It does, if any, suggest that the veteran British automaker is aiming to convert existing Tesla owners into I-PACE owners. This is a pretty common marketing strategy, though it does very little to help Tesla and Elon Musk’s aim of transitioning existing gas car owners to electric-powered transportation.

Such a marketing campaign could potentially backfire on the I-PACE as well, considering that the vehicle lacks the support of a Supercharger Network for convenient, near-effortless long-distance travel and other common Tesla amenities such as free over-the-air updates (at least for now). It is also quite noteworthy to see Jaguar specifically targeting existing Tesla owners, and not other EV enthusiasts who drive electric cars like the Chevy Bolt and the Nissan Leaf.

It should be noted that Jaguar’s recent marketing efforts appear to be quite Tesla-focused as of late. Apart from this recent marketing push, printed I-PACE materials also mention comparisons to Tesla and its electric vehicles.

The Jaguar I-PACE has earned multiple awards since its release. Just this past April, the I-PACE beat out its fellow “Tesla Competitor,” the Audi e-tron, to win the 2019 World Car of the Year, the World Car Design of the Year, and World Green Car of the Year awards. Overall, the I-PACE had gathered over 60 international awards from automotive industry groups and media publishers in areas such as design, handling and performance, technological innovation, and passenger safety.

The I-PACE appears to be experiencing some growing pains, with only select dealers in the United States being knowledgeable about the vehicle. This results in an ownership experience that has a hefty room for improvement. The I-PACE was also hit by a recall last June over a fault in the vehicle’s regenerative braking system, which could result in an “increased delay” when a driver hits the brakes and when the SUV begins slowing down.