American electric car startup Lucid Motors drove its “Lucid Air” prototype from its headquarters in Silicon Valley to Los Angeles and back, an 800-mile journey, on just two charges.

Lucid Motors was established in 2007 and aimed to create high-performance electric vehicles. After unveiling the Lucid Air in December 2016, the company has fine-tuned its first vehicle for the last three-and-a-half years, ensuring it will be able to compete with Tesla’s current industry-leading cars. It plans to begin production of the Air this year. Also, it expects to use its single flagship store located near its Silicon Valley headquarters to initiate a direct-to-consumer sales experience.

The Lucid Air is a dual-motor electric vehicle with 1,000 total horsepower and an estimated top speed of 217 MPH. Beyond performance, the team at Lucid set out to challenge itself on achieving 400 miles on a single charge in long-range mode. Tesla’s Long Range Model S is currently the only vehicle that has an EPA estimated range that nears 400 miles.

The vehicle’s trip was documented by a few members Lucid’s team and released in a new video that recorded the nearly 800-mile journey that consisted of stops for a photoshoot at the Santa Monica Pier, and a few strolls down some of Los Angeles’ most notable streets. 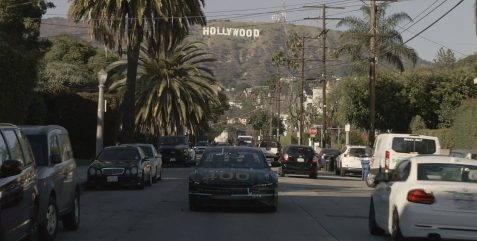 Lucid’s long-range journey would take the vehicle from the company’s headquarters in Newark, California, just West of Fremont, where Tesla’s main production facility is located. After leaving Northern California, the trip took the vehicle through a vast array of elevations, traveling down the iconic California coastline on Pacific Coast Highway 1.

The trip home would bring the vehicle through the Tejon Pass, a stretch of road in both Los Angeles County and Kern County that sits 4,144 feet above sea level. After the car arrived back in Northern California, it was met by Lucid CEO and former Tesla VP of Engineering Peter Rawlinson, and two Air vehicles traveled across the Golden Gate Bridge back to the company’s headquarters. 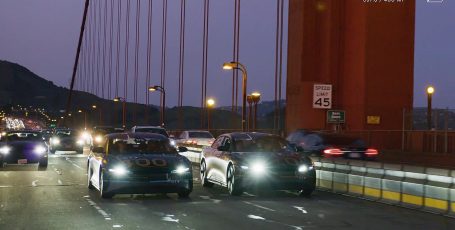 The Lucid Air managed to complete this trip with only two charges, one when beginning the trip and another from an overnight charge after the driver and passenger completed the photoshoot in Santa Monica. The roughly 400 miles per leg trip was completed while utilizing 2170 lithium-ion battery cells from both Samsung SDI and LG Chem, the latter being the same as Tesla uses in its Model 3. The 2170 cells are more energy-dense and more cost-effective than the 18650 battery.

Nevertheless, Lucid’s journey from one end of California to the other has proven the automaker could become a real player in the electric vehicle industry. As many companies who are transitioning to electric vehicles struggle with range in their cars, Lucid has managed to prove that its pre-production Air can travel through the highs and lows of the Golden Gate with its impressive range.

Watch Lucid’s documentation of the “Lucid Air’s” journey through California below.