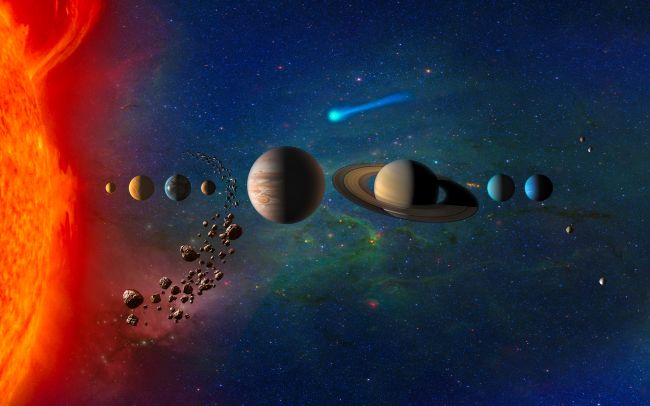 NASA’s next mission could study one of these bizarre moons

Artist's concept of the solar system (not to scale). Credit: NASA

Venus, Triton, or Io? Where would you send NASA’s newest mission?

The space agency is in the midst of planning out its next Discovery class mission, a lower cost exploration program, capped at $500 million (not including launch costs). To that end, NASA has selected four finalists and one — or perhaps two — will ultimately be chosen from the quartet to make it to the launch pad.

“These selected missions have the potential to transform our understanding of some of the solar system’s most active and complex worlds,” Thomas Zurbuchen, associate administrator of NASA’s Science Mission Directorate, said in a statement Thursday (Feb. 13), when the finalists were announced.

“Exploring any one of these celestial bodies will help unlock the secrets of how it, and others like it, came to be in the cosmos,” he added.

The teams behind the four mission concepts will each receive $3 million to continue developing their ideas over the next nine months. NASA officials will then evaluate the prospects and select up to two missions for continued development.

In previous years, many of the choices were either very asteroid heavy or Mars centric. But this year, its Venus’ turn. Two of the four mission concepts are all about exploring Earth’s so-called hellish twin.

The DAVINCI Plus (Deep Atmosphere Venus Investigation of Noble gases, Chemistry and Imaging Plus) mission would send a probe down through the thick Venusian air, in an effort to better understand how the planet’s atmosphere has changed over time.

The VERITAS (Venus Emissivity, Radio Science, InSAR, Topography and Spectroscopy) mission would map Venus’ surface in detail from orbit. These measurements would help scientists deduce whether or not Venus has plate tectonics as we see on Earth and if there are active volcanoes on the planet’s surface.

Shifting the focus to another volcano world, the Io Volcano Observer (IVO) mission, would focus on the Jovian moon, Io, and observe it up close through a series of close flybys.

We know that Io’s volcanism is driven in part by the other Galilean moons pulling and tugging on the rocky moon, which keeps its insides churning. But what researchers don’t know is exactly how these tidal forces affect the evolution of rocky bodies. Here’s where IVO comes in.

Lastly, there’s the Trident mission. This mission would be set up similar to the New Horizons flyby of Pluto in 2015. The spacecraft would fly by Neptune’s largest moon, Triton, and study is up close, mapping the surface and trying to gauge whether or not the moon is hiding a subsurface ocean.

You can learn more about all four finalists here.

Established in 1992, NASA’s Discovery Program has supported the development and implementation of over 20 missions and instruments. Some of those missions include the Kepler space telescope, the Mars InSight Lander, the Dawn spacecraft that explored the dwarf planet Ceres and many more.

NASA’s next mission could study one of these bizarre moons