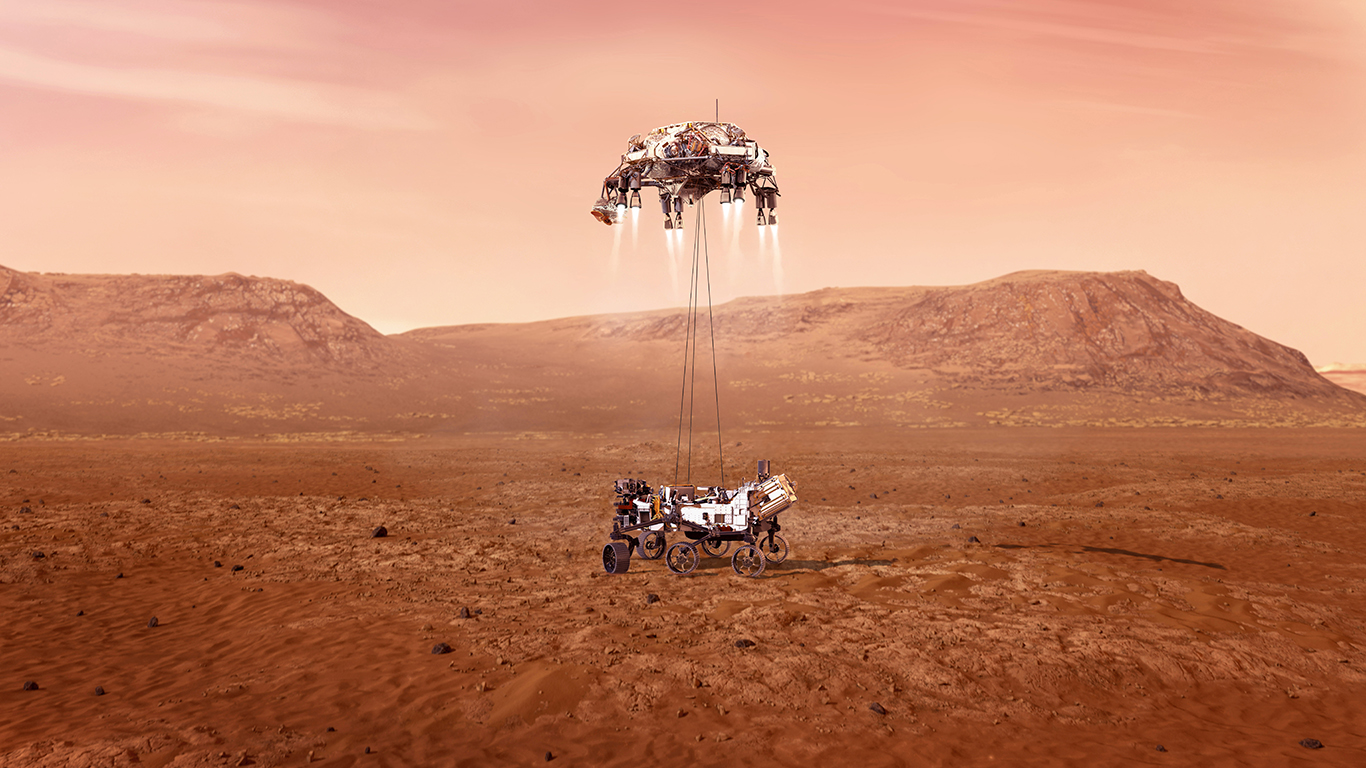 NASA braces for ‘7 minutes of terror’ as rover, rocket crane near Mars

NASA’s most ambitious – and difficult – Mars rover mission to date is nearly at the end of its interplanetary journey, but it is just the beginning of the excitement. On Tuesday (Feb. 16) engineers at NASA’s Jet Propulsion Laboratory (JPL) confirmed that Perseverance is doing well and is prepared to attempt a touchdown at about 12:55 p.m. PST (3:55 p.m. EST) on Thursday (Feb. 18).

NASA’s fifth Mars rover, Perseverance, will attempt a tried and true, but terrifying landing method to reach the Martain surface safely. In a process called entry, descent, and landing (EDL) the rover will burst through the Martian atmosphere at 12,500mph (20,000 kph) and slow to just under 2mph (3kph) in about seven minutes – a process which has earned the nickname “seven minutes of terror.”

From interplanetary spacecraft to Martian rover in seven minutes

For the past seven months, Perseverance has traveled 300 million miles (480 million kilometers) as an interplanetary spacecraft. When it reaches its final destination of Mars on Feb. 18, the spacecraft will have to shed some layers to prepare to land on the Martian surface. Perhaps the most challenging part of the seven minutes of terror is that Perseverance will conduct every aspect autonomously – engineers back on Earth will not be able to intervene due to the communications time delay caused by the distance between Earth and Mars.

During the first stage of landing known as entry, Perseverance will slam into the relatively thin Martian atmosphere at the neck-break speed of 12,500mph (20,000 kph). At approximately 12:38 p.m. PST (3:38 p.m. EST), 10 minutes prior to entering the Martian atmosphere, the Cruise Stage which has reliably propelled Perseverance on its journey from Earth via solar power will separate. This will initiate the official transition from spacecraft into rover.

To protect the rover and its critical hardware Perseverance is housed inside of a protective covering – called an aeroshell – and is outfitted with a robust heat shield. Small thrusters at the crown of the aeroshell help to reorient itself and ensure that the heat shield is facing in the right direction as it enters the atmosphere. The aeroshell and heatshield will absorb and deflect the brunt of the heat energy – reaching about 2,370 degrees Fahrenheit (about 1,300 degrees Celsius) – caused by the friction of entering the Martian atmosphere at such a high velocity.

Once through peak heating and deceleration, Perseverance will utilize a new technology called Range Trigger to determine its exact location and distance to the surface. The spacecraft will utilize this technology to autonomously determine the optimal time to deploy its supersonic parachute – the largest ever sent to Mars – and separate its heat shield. This is expected to occur at 12:52 p.m. PST (3:52 p.m. EST). Once the heat shield has separated the powered descent stage – and the Perseverance rover itself – will be exposed to the Martian environment.

Although a similar descent method has been used in the past with the landing of NASA’s Curiosity rover in 2012, Perseverance’s way of doing things has received a major upgrade.

Once the heat shield has been dispersed, Perseverance will use a radar and cameras to utilize a new landing technology called Terrain-Relative Navigation. Essentially, Perseverance will continuously take images to map out the Martian surface as it descends to determine its exact location. The spacecraft will actively decide and target the best possible safe landing site which can be autonomously changed up to 2,000 feet (600 meters). Then the aeroshell and parachute are jettisoned and it’s the powered descent module’s time to shine.

Using rockets to land, rather than to launch

Just two minutes after ditching the heat shield, at 12:54 p.m. PST (3:54 p.m. EST) and only 1.3 miles (2.1 kilometers) above the surface, the powered descent stage will fire eight throttleable retrorockets to slow the spacecraft’s descent even more and steer it to its chosen landing target. During the powered descent phase, the spacecraft will slow from about 190 mph (306 kph) to just 1.7 mph (2.7 kph).

Once the spacecraft determines that it is 65 feet (20 meters) from the surface by utilizing the Terrain-Relative Navigation, the powered descent stage will initiate the sky crane maneuver. In this phase, the Perseverance rover will be delicately lowered to the Martian surface with a system of Nylon cords.

At 12:55 p.m. PST (3:55 p.m. EST) the $2.4 billion NASA Mars 2020 mission will officially touchdown on the surface of Mars in the Jezero Crater. Once safely down, the sky crane will severe the cords and fly off for a crash landing at a safe distance away from the rover.

During the landing attempt, NASA’s Mars Reconnaissance Orbiter will be overhead and constantly sending telemetry back to Earth via NASA’s Deep Space Network. The telemetry will indicate to engineers back at NASA JPL if the landing procedure was successful and will confirm a touchdown at 12:55 p.m. PST (3:55 p.m. EST).

This will be the first time that a NASA Mars rover will be landing with its eyes open, so to speak. NASA hopes that the first images – and sounds – of the Martian landing will be available to release to the public within about an hour of confirmed touchdown.

Beginning around 11:15 am PST (19:15 UTC) on Thursday, February 18th, NASA will provide live coverage of Perseverance’s landing attempt. The agency will carry the coverage on NASA TV and its website, as well as a number of other platforms including YouTube, Twitter, Facebook, LinkedIn, Twitch, Daily Motion, Theta.TV, and the NASA app. You can view the entry, descent, and landing process in its entirety in the video below provided by NASA’s JPL.

Follow along as our team gives you their take on the biggest stories of the week.
NASA braces for ‘7 minutes of terror’ as rover, rocket crane near Mars