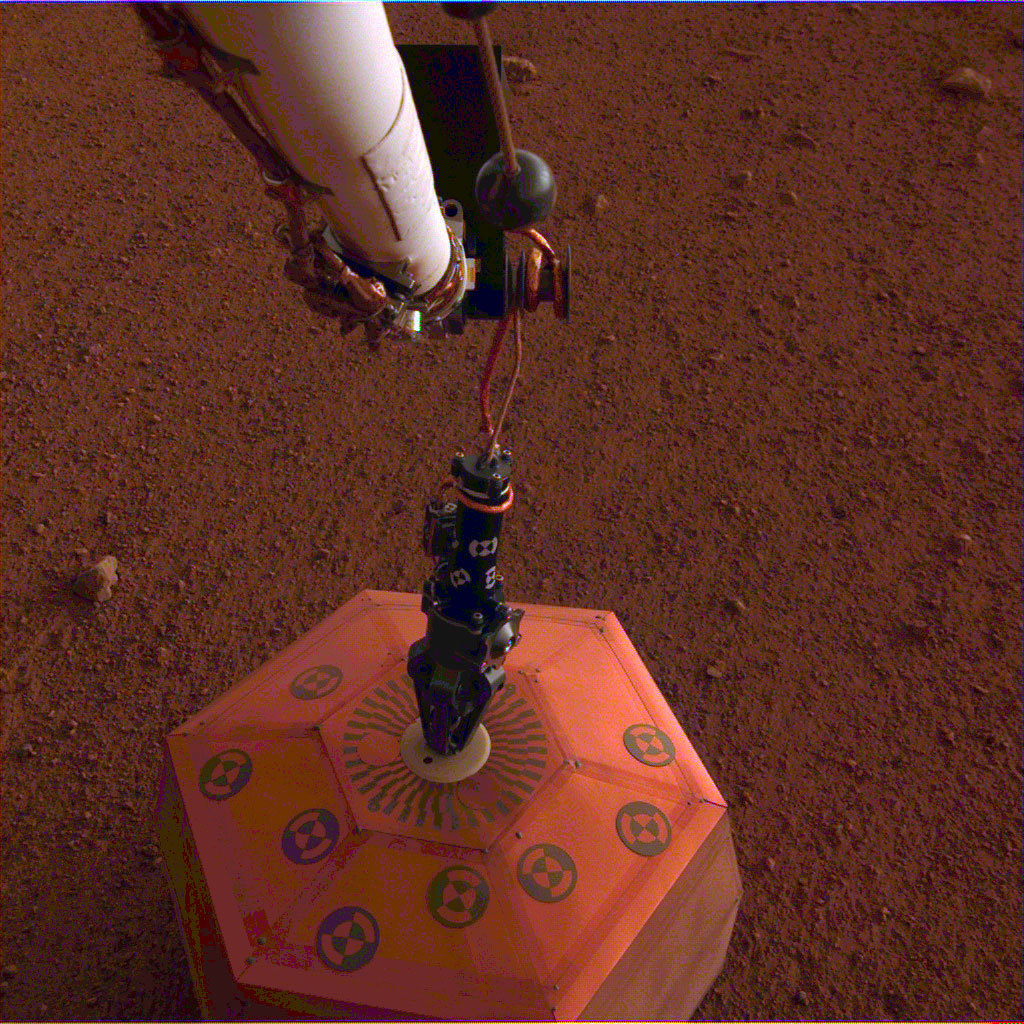 In another historic feat for NASA’s InSight lander, a seismometer has now been deployed on Mars, marking the first time a scientific instrument has been placed onto the surface of another planet. Once the craft’s team have things set up for readings, its instruments will begin measuring the internal vibrations of the red planet, hoping to ultimately learn about the activities and composition of its core and crust. InSight’s instruments will also study how powerful and frequent seismic activity is on Mars along with how often the surface is hit with meteorites. If we’re hoping to explore and possibly live there one day, this is all very important information to have.

After launching on May 5, 2018, aboard an Atlas rocket in California, InSight and its MarCO twin CubeSat companions traveled through deep space for around 6 months before landing on the Martian surface at 11:52 PST on November 26, 2018, an event watched live around the world, including a broadcast in Times Square, New York City. The planned mission for the craft is a little over 1 Martian year, i.e., about 2 Earth years, during which time it will aim to provide scientific data useful for understanding the processes that have shaped the rocky planets of our solar system. In other words, the things InSight learns about Mars will be directly relevant to our own planet as well.

InSight’s name is actually an acronym for “Interior Exploration using Seismic Investigations, Geodesy and Heat Transport”, each part being a reference to the specific science it will be conducting. There are several auxiliary instruments on board the lander that will assist or complement its main mission. However, there are 3 scientific instruments on the craft to help meet its objectives.

First, a seismometer named the Seismic Experiment for Interior Structure (SEIS) will study seismic waves from the Martian surface to study the planet’s crust. When magma moves or meteorites hit, the instrument will detect the motion and gather information that will tell scientists about Mars’ temperature, pressure, and composition. This is the instrument featured in the lander’s recent photo.

Second, a heat flow probe named the Heat Flow and Physical Properties Probe (HP3) will burrow more than 10 feet into the surface to measure the heat still flowing out of Mars, giving clues about how it evolved and whether Earth and Mars are made of the same materials. Finally, a radio science instrument named the Rotation and Interior Structure Experiment (RISE) will measure tiny changes in the location of InSight to measure Mars’ “wobbles” on its axis. This movement data will provide information about the planet’s core.

InSight is conducting its experiments on the western side of the Elysium Planitia of Mars, a smooth, flat region near the planet’s equator. The location was chosen from a pool of 22 candidate landing sites, all within Elysium, evaluated during several workshops from 2013-2015. The decision was made based on Elysium’s proximity to the equator (maximum sun for InSight’s solar arrays), low elevation (plenty of atmospheric space for its landing), lack of rocks and slopes (flat enough for the instruments to deploy and work properly), and the subsurface structure (so the digging instruments could burrow easily).

Next, InSight will finish setting up its remaining instruments and begin its full science mission. We can expect to continue receiving image updates from the lander as more milestones are reached. Here’s an extra bonus if you want to feel like you’re “there” with InSight: NASA’s “Experience InSight” interactive web page lets you control a virtual version of the lander in a Martian environment. You can deploy its solar panels, move around a few of its instruments, or just learn about the various parts that make up the mission. There are additionally two virtual cameras, just like the ones onboard the actual craft, enabling you to watch the movements you’re making, just like InSight’s team sees from their control center.

Watch the below video for a recap of InSight’s landing: