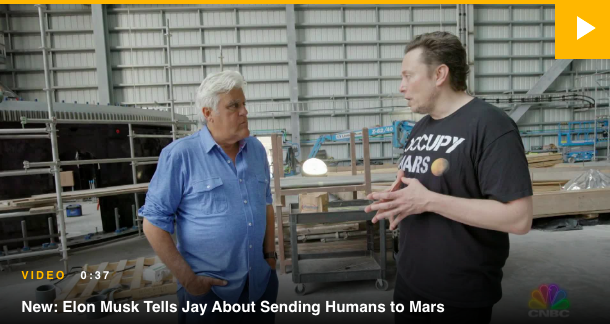 CNBC released a sneak peek of Elon Musk on Jay Leno’s Garage. In video clips shared with Teslarati, we get a preview of what Jay Leno and Elon Musk talk about in Leno’s upcoming episode of the show. We reported on the live Q&A Leno is holding for fans of the series earlier today.

In the first clip, Leno is with Elon Musk at Starbase where the SpaceX CEO gave Leno a tour and overview of Starship.

“The ship is about 165 feet tall,” Elon told Leno who said that he didn’t think anyone had any idea how big Starship is.

Elon explained that on the inside, the Starship is 30 feet in diameter. “When you see it on TV, you’re watching it from half a mile away,” Leno said.

In the second clip, Elon Musk gives Leno a tour of his rocket engines. This clip was also shared on Twitter by Jay Leno’s Garage. Elon Musk shared his thoughts about patents.

“We don’t really patent things. Those are for the weak,” Elon Musk said adding that patents are typically used as a technique to block and they don’t help to advance things.

In the third clip shared with us by CNBC, Elon Musk talks with Jay about sending humans to Mars.

“I’d say life on Mars is difficult, dangerous. People might die. It’s just fundamentally–are we going to become a multiplanet species or not?” Elon said.

“Even if we’re sure Earth would be fine forever, do you want to be here forever? I think we want to be a spacefaring civilization.”