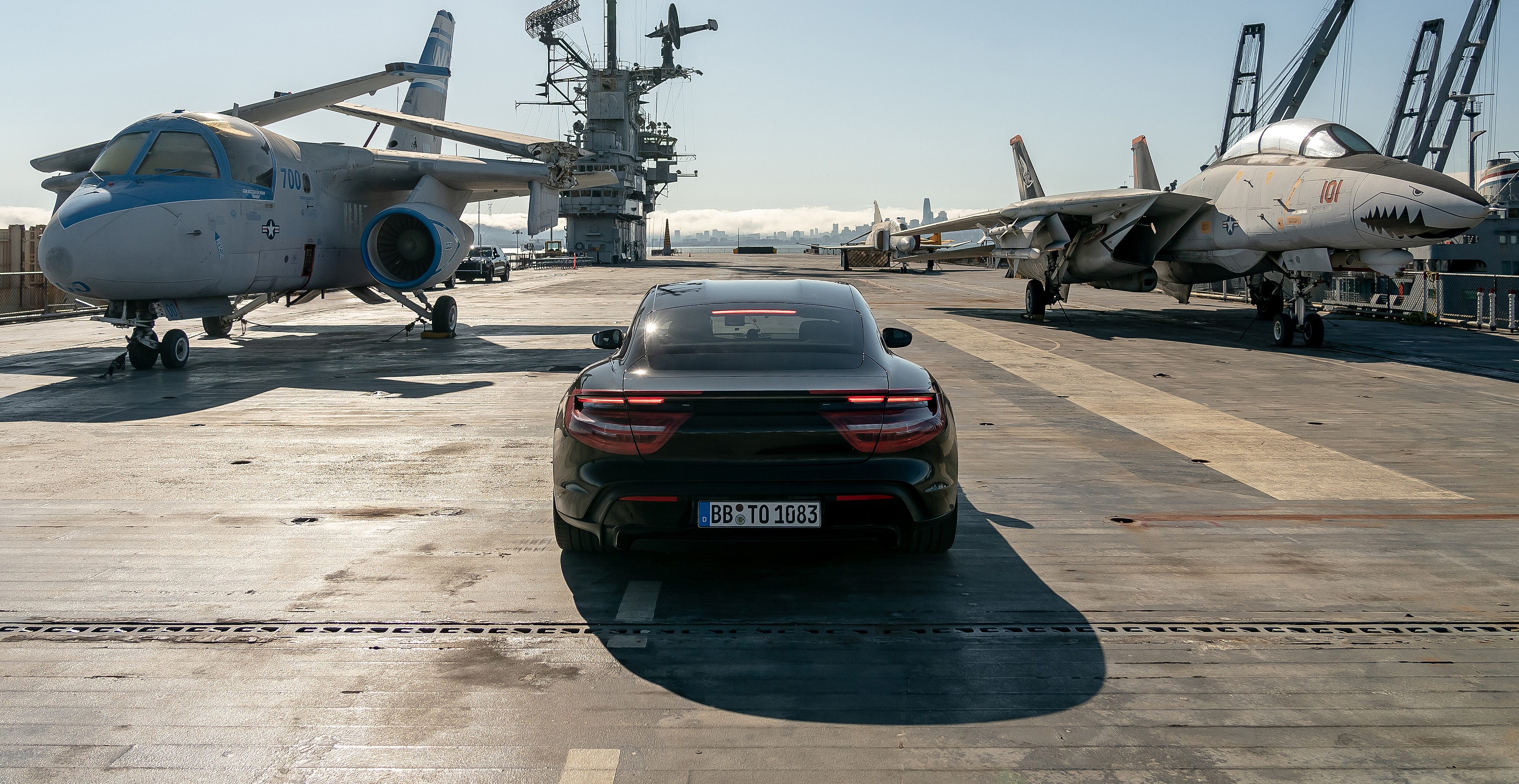 The Porsche Taycan’s formal unveiling is only a couple of days away, and the German sports car maker is on full throttle in its efforts to drum up excitement for what could very well be its most important vehicle in decades. Among the most recent of these is a unique acceleration and braking test, which just so happened to be conducted on the flight deck of a US aircraft carrier.

For its test, Porsche opted to utilize the USS Hornet as the runway for the Taycan’s test. The ship is massive, displacing over 27,500 tons and fitted with an 869-foot flight deck. Apart from its long history of active service, the USS Hornet also has the distinction of being the ship that recovered the astronauts from the Apollo 11 and 12 Moon missions.

This makes the test particularly tricky, considering that it’s pretty much open sea after the vehicle covers the USS Hornet’s flight deck. Fortunately, the Taycan proved capable, accelerating from a standstill to 90.58 mph in 422 feet before braking hard. The entire run took 10.17 seconds.

Speaking about the experience, the veteran female racer noted that the car performed well considering the constraints of the USS Hornet. Holbrook noted that the vehicle proved stable and composed, despite the uneven surface of the carrier’s deck.

“The deck is a long, long way up and despite appearances, it’s actually quite bumpy. Deliberately accelerating towards thin air and the ocean is a new experience for me, but the Taycan gave me a huge amount of confidence – it was really stable but under acceleration and, more importantly, under braking. I built up to the final run, slowly increasing the speed each time until I felt confident and each time the car felt completely comfortable in what it was being asked to do. What a rush!” she said.

Stefan Weckbach, Vice President for the Taycan’s Product Line, stated that the unconventional test was a good, fun way of demonstrating the power of the upcoming vehicle. The Porsche executive candidly added that he was just glad no one ended up taking an unexpected swim due to the test.

“While this isn’t a usual metric we use to benchmark the performance of the Taycan and rather some kind of fun testing than a completely serious one, it’s quite a fitting way to demonstrate the power of the car as it nears the end of its development. On a tough, changeable surface the Taycan’s composure, its incredible acceleration and stopping power were absolutely impressive – though we decided not to take it to the max, just to reach the 0-100 mph margin. While I was completely sure both Shea and the car could achieve something special, I’m really relieved no one went for a swim,” he said.

The production version of the Porsche Taycan is set to be formally unveiled in three countries later this week; one in Canada, one in Germany, and another in China. The event will begin on September 4, 2019 at 9 a.m. EST.

Watch the Porsche Taycan’s unique acceleration and braking test in the video below.