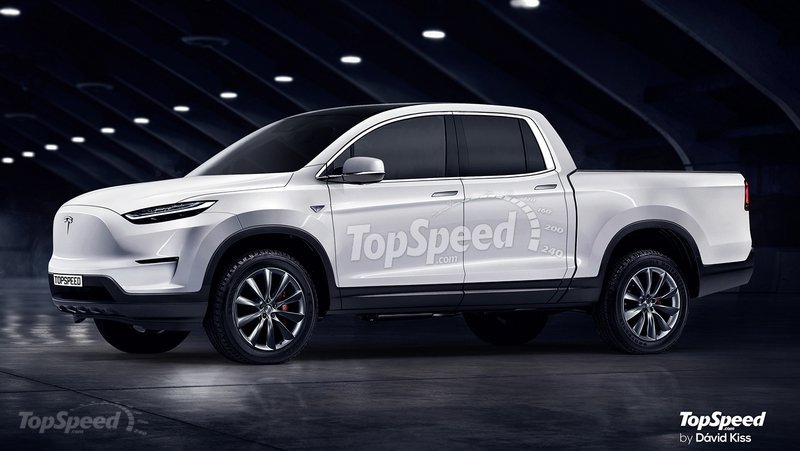 Call it the Tesla Truck, the Tesla Pickup Truck, or the Tesla-150, but CEO Elon Musk has made it clear as revealed in the company’s Master Plan, Part Deux that the electric carmaker plans to make a pickup and heavy-duty truck. In fact, he couldn’t be clearer: he stated in the past that plans call for something to compete with the best-selling light-duty vehicle on American roads: the Ford F-150. This precludes the idea of a small or mid-sized Tesla truck and says that Musk seems to be clearly aiming for a full-sized offering. A full-sized electric truck seems like a lark to most truck owners and enthusiasts. I live in the heart of truck country, Wyoming, where pickup trucks equal passenger cars in numbers on the road and range from half-ton F-150s, 1500s, and Silverados to heavy-duty and diesel-driven duals. Although many enjoy scoffing at the wannabe cowboys who buy a big, shiny pickup and drive it to the office and back every day – never seeing dirt or any load larger than an IKEA furniture set – the core truck buyer and, indeed, the majority of truck owners do not fit that stereotype.

In general, truck owners fall into three categories: weekend warriors, offroaders, and workhorses. The weekend warrior uses a truck to tow toys (boats, RVs, what have you) and occasionally haul household construction goods for home improvement. The offroader buys the TRD, Pro-4X, and similar packages and spends a lot of time getting mud, dirt, and tree branches stuck on the truck (this would be my personal category, for the record). Finally, the workhorses are those who buy a truck to work with, either as a commercial vehicle or as a personal working machine – these include farmers, ranchers, commercial haulers, tradesmen, and so forth.

Traditionally, the largest truck market are the weekend warriors. These are the folks who buy a truck because they want to haul the family and their playthings around. They tow boats, jet skis, haul camping stuff, tote gear to the game, tailgate, and otherwise use their truck mostly as a recreational vehicle that may or may not be their everyday driver. Next to that market, and not as small as some might expect, are the workhorse buyers. These are the people who buy trucks to work with them and rely on them to get any of a number of jobs done. Most importantly to the industry, these are the repeat buyers – the ones who buy, trade-in and buy again (rinse, repeat). Where I live, for example, it’s not unusual for a rancher to buy a new truck every two or three years. Trading in a machine that will have over 100,000 miles on it is not unusual either. That’s 30,000-50,000 miles driven in only one year. For reference, as a commercial over-the-road driver, I put a little over 100,000 miles per year on my rig. Surveys of the truck market nationally show that in the traditional truck strongholds of the West, including Texas on up to the Dakotas and over to the coast, that kind of mileage is not unusual for the working pickup.

So let’s assume that Tesla plans to make a truck that will sell on the traditional pickup truck market in competition with the best-sellers from Ford, GM, and Ram. We can assume they won’t be doing a hard-core off-road package, but will aim for a 4×4 market in order to appeal to most truck buyers. Here’s a bullet list of criteria for a mainstream Tesla Truck offering, based on the most common features of a mainstream full-size pickup truck today:

Those criteria make up the most common things truck buyers ask for. The recent revamp of the Toyota Tundra, for example, was mostly about style since the previous-generation Tundra was dated and didn’t look like a “beefy truck,” as one friend put it. This may be laughed at by the Teslarati, but it’s akin to the Model S having been designed to look like the Volkswagen Thing rather than the beautiful Euro-styled sedan it is. So don’t scoff. Now that we have those basic requirements, let’s look at what Elon and Tesla would have to accomplish to make that happen.

For starters, the current powertrain in the Model S or Model X would not be sufficient. If put under load, towing a trailer for example, and with the aerodynamics of a pickup, the current powertrain would be lucky to achieve half the range required. Anyone who doubts this need only consider how much work went into Bob Lutz’ never-selling VIA truck and its plug-in hybrid powertrain, which together only produce marginal range when trailering at capacity. That’s an ICE (internal combustion engine) and electric drivetrain combined. Remember also that every pound of batteries added has a net-reduced benefit to the overall range of the vehicle as it also adds weight. Since Tesla isn’t currently using and hasn’t made a lot of noise about eventually using high-tech, high-density, bleeding-edge lithium batteries to lighten the battery’s weight, we can assume that the current Panasonic cells are what would power a Tesla Truck if it were made in the near future.

To tow a trailer at 7,000+ pounds would require an enormous amount of energy and to do so for a long range like truck owners would expect (e.g. to the lake and back) would be a feat. It’s not insurmountable, of course. There’s little doubt that Tesla’s engineers couldn’t overcome this obstacle, but it will be a huge one.

Matching V8-like performance would not be difficult – the Model S and Model X already does this and with the inherent strengths of an electric motor, namely torque from zero, the numbers actually required would be smaller than those needed for the gasoline equivalent.

Next comes another problem – off-road. With the problems the Model S has had in the past with undercarriage breaches on the highway, it’s easy to see concern when going fully off the road. Even the best of dirt roads are rough. Putting an under-pan, as Tesla has done may or may not work well with a truck. Skid plates are not unusual for trucks, of course, but they rarely run past the front engine compartment. Most of the safety is addressed by lifting components high up into the framing to minimize exposure. With a big, long, heavy battery pack, though, this is problematic. A skid plate may do the trick, but this would at the very least be a big marketing hassle for Tesla if nothing else.

Another big roadblock is going to be the price tag. In order to compete with the F-150 and its brethren, the Tesla Truck would need to sell at around the $30,000-$40,000 mark at entry-level. Truck buyers would probably be willing to pay a premium of $8,000, even $10,000 on the truck if the expected fuel savings are big and obvious. Yet even that premium markup is going to be a problem for Tesla because, well, unless of course the pickup will be based off the Model 3. This is where the Gigafactory could possibly pay off, but at this point, that is only an idea that is likely to become reality, but until it is, we have no idea how real its cost-savings in terms of dollars per kWh will be.

Finally, for sake of space, we have not even mentioned dealership woes. The top truck markets are well outside of Tesla’s best markets for the Model S and Model X. Some of those markets, such as Texas, are off limits to Tesla’s direct sales entirely. Yet if that’s overcome, there’s also marketing. Not only are pickup truck buyers exceedingly brand loyal (just ask Toyota and Nissan how easy it is to penetrate the full-sized market), but they’re finicky as well.

The conclusion? Tesla could likely, eventually, field a full-sized pickup truck capable of competing with the F-150, but the challenges are huge. Just as Elon likes ’em. Will they do it? Good question, but it’s fair to say that if they do, they may be treading on the thin crust of a deep, deep lake.