The planning date for the launch debut of SpaceX’s Crew Dragon spacecraft has been pushed to no earlier than (NET) March 2019 per sources familiar with the matter, potentially creating a direct schedule conflict with the company’s planned operational debut of Falcon Heavy, also NET March 2019.

At the same time as delays to the Commercial Crew Program continue to increase the odds that NASA will lose assured access to the International Space Station (ISS) in 2020, both of SpaceX’s critical missions are entirely dependent upon the support of its Kennedy Space Center-located Launch Complex 39A (Pad 39A), creating a logistical puzzle that will likely delay Falcon Heavy’s second launch until Crew Dragon is safely in orbit.

The latest updates that #SpaceX has made to LC-39A. They have made a lot of progress with the cladding in the last month. #Falcon9 #Space #Spaceflight #SpaceCoast #Florida #KSC @NASASpaceflight pic.twitter.com/sq76IKDc3K

As of the first week of December 2018, SpaceX was reportedly planning towards a mid-January 2019 launch debut for Crew Dragon. By the end of December, DM-1 was no earlier than the end of January. By the end of January, DM-1 had slipped to from late-February to NET March 2019. Put in slightly different terms, SpaceX’s Crew Dragon launch debut has been more or less indefinitely postponed for the last two months, with planning dates being pushed back at roughly the same pace as the passage of time (i.e. a day’s delay every day).

Admittedly, DM’s apparently indefinite postponement may well be – and probably is – more of an artifact than a sign of any monolithic cause. While the US government’s longest-ever shutdown (35 days) undoubtedly delayed a major proportion of mission-critical work having to do with extensive NASA reviews of SpaceX and Crew Dragon’s launch readiness (known as Readiness Reviews), much of the 60+ day DM-1 delay can probably be attributed to the complexity of the tasks at hand. Being as it is the first time SpaceX has ever attempted a launch directly related to human spaceflight, as well as the first time NASA has been back at the helm (more or less) of US astronaut launch endeavors in more than 7.5 years, significant delays should come as no surprise regardless of how disappointing they may be. 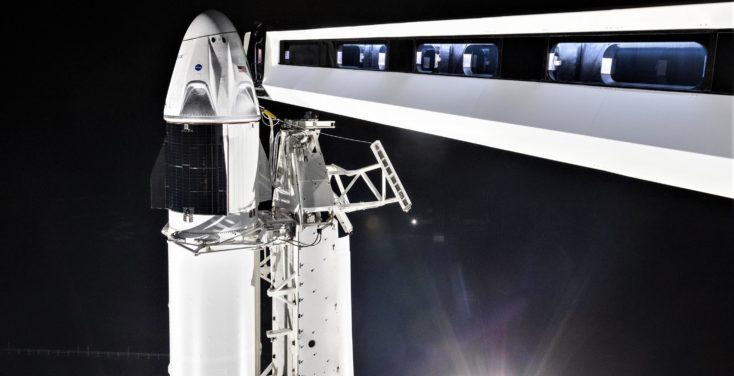 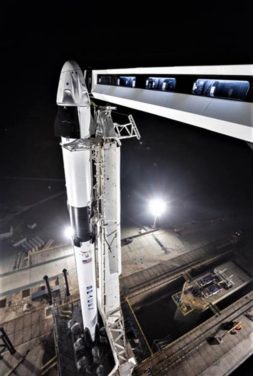 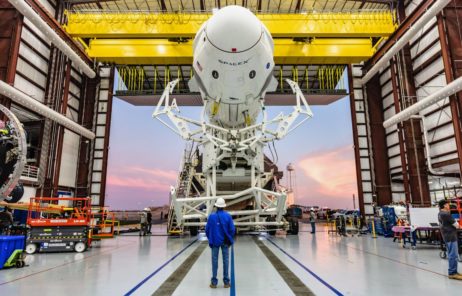 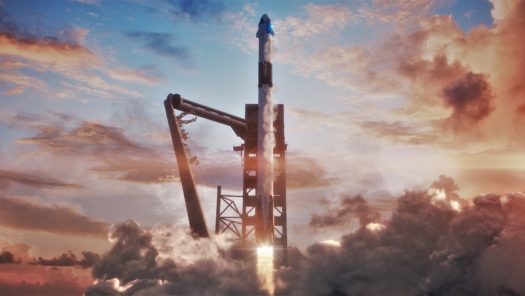 A render of Crew Dragon launching atop Falcon 9. (SpaceX)

The most consequential aspect of DM-1’s two-month (at least) delay will likely be the myriad ways it feeds into delays of SpaceX’s in-flight abort (IFA) test and first crewed launch (DM-2), and thus’s NASA’s ability to once again independently launch US astronauts. Given that SpaceX’s DM-2 is expected to occur around six months after DM-1 and that the final certification of Crew Dragon for official astronaut launches will likely take another 2-3 months, these delays – barring heroics or program modifications – are pushing NASA dangerously close to the edge of losing assured US access to the International Space Station (ISS).

According to a July 2018 report, the Government Accountability Office (GAO) analyzed the Commercial Crew Program and NASA’s human spaceflight program more generally and concluded that NASA would lose assured access to the ISS in November 2019 if Boeing and SpaceX continued to suffer delays and were unable to reach certification status by then. This comes as a result of NASA’s reliance on Russian Soyuz launches for access both to and from the ISS, launch and return service contracts which have no replacements (aside from SpaceX and Boeing). While GAO noted that NASA could likely delay that loss of assured access until January 2020, even that might be pushing it if SpaceX’s DM-1 delay continues much further.

“[While NASA is working on potential solutions, it] has not yet developed a contingency plan to address the potential gaps that [future delays in Boeing and SpaceX schedules] could have on U.S. access to the ISS after 2019.” – GAO, July 2018

Prior to DM-1’s delay from NET January to NET March 2019, SpaceX was targeting an In-Flight Abort test roughly three months after DM-1 (it will reuse DM-1’s Crew Dragon capsule), DM-2 six months after DM-1 (NET June 2019), and NASA certification and the first operational astronaut launch (PCM-1) as few as two months after DM-2 (August 2019). It’s reasonable to assume that delays to DM-1 will impact subsequent Crew Dragon launches roughly 1:1, as DM-2 and its many associated reviews hinge directly on DM-1, while the same relationship also exists between PCM-1 and DM-2. As a result, Crew Dragon’s two-month delay probably means that SpaceX’s NASA certification will occur no earlier than October 2019, giving NASA no more than 90 days of buffer before the US presence on the ISS drops from around 50% (3 astronauts) to 0%.

An excellent view of #SpaceX Launch Complex 39A – better known as Pad 39A – from a February 4th Air National Guard (180th Fighter Wing) flyover. Of note, SpaceX has painted the FSS (tower) black and white and is in the process of installing transparent cladding. pic.twitter.com/DTiGWJk1D7

Crew Dragon and Falcon Heavy walk into a bar…

The unexpected delays to Crew Dragon’s DM-1 launch debut are likely placing SpaceX in an awkward situation with respect to the operational launch debut of Falcon Heavy, meant to place the terminally delayed Arabsat 6A satellite into orbit no earlier than March 7th, 2019 (at the absolute earliest). DM-1 is also targeting a launch sometime in March, posing a significant problem: both Falcon Heavy and Crew Dragon can only launch from Pad 39A, while the on-site hangar simply doesn’t have the space to support schedule-critical Falcon Heavy prelaunch work (mainly booster integration and a static fire test) and no less critical Crew Dragon launch preparations simultaneously. 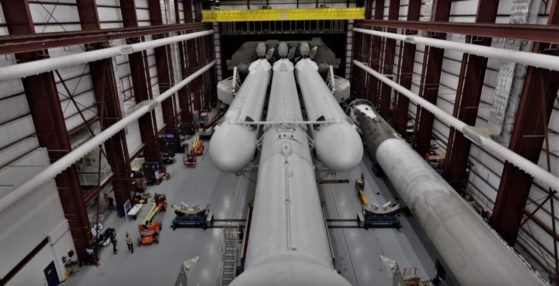 SpaceX’s 39A hangar is massive but it would be a stretch to support Crew Dragon and Falcon Heavy simultaneously. (SpaceX) 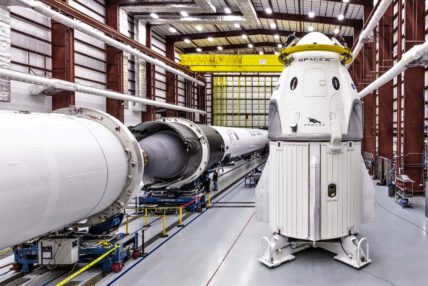 Much like SpaceX’s inaugural Falcon Heavy rocket spent a month and a half fully integrated and more than two weeks in a static-fire limbo (albeit due to one-of-a-kind circumstances) before its launch debut, SpaceX’s second Falcon Heavy rocket – comprised of three new Block 5 boosters and Heavy-specific hardware upgrades – is likely to take a good deal more time than a normal Falcon 9 for prelaunch processing. Almost all of that Heavy-specific testing depends on the rocket being integrated (i.e. all three boosters attached) for preflight fit and systems checks and a wet dress rehearsal (WDR) and/or static fire ignition test.

It’s entirely possible that SpaceX integration technicians are able to complete the process of swapping out Crew Dragon and Falcon 9, modifying the transport/erector (T/E), completing Falcon Heavy booster integration, and installing Falcon Heavy on the T/E quickly enough to allow for simultaneous DM-1 and Arabsat 6A processing. It’s also possible that an extremely elegant but risky alternative strategy could solve the logistical puzzle – as an example, SpaceX could roll Crew Dragon and Falcon 9 out to Pad 39A a week or more before launch to give Falcon Heavy enough space for full integration, whereby Falcon 9’s necessarily successful launch would clear the T/E and allow it to be rolled back into 39A’s hangar for Falcon Heavy installation.

Falcon Heavy at the Cape pic.twitter.com/hizfDVsU7X

The most likely (and least risky) end result, however, is an indefinite delay for Falcon Heavy Flight 2, pending the successful launch of Crew Dragon. This is very much an instance where “wait and see” is the only route to solid answers, so wait and see we shall.