The first finalized Raptor engine completed a (presumably) successful static fire debut on the evening of January 3rd, a major milestone for the BFR program. (SpaceX)

After years of development, multiple prototypes constructed, and more than 1200 seconds of cumulative static fire testing at durations longer than what is needed to land on Mars, SpaceX propulsion engineers and technicians have successfully built and static-fired the first flight-worthy Raptor for the first time ever.

This is an incredibly important step towards BFR (Starship/Super Heavy) launch operations and is even more directly encouraging for the first integrated hop tests of SpaceX’s Starship prototype (unofficially deemed Starhopper), which could very well be the next host of the pathfinder Raptor engine pictured below.

In the scope of SpaceX’s history designing, building, and optimizing large-scale rocket engines, Raptor’s development likely followed a similar path. While Merlin 1 operates on a dramatically simpler combustion cycle (gas-generator), uses different fuel (kerolox vs. methalox), and is significantly less powerful and efficient than Raptor (as proposed), the workhorse engine went through a range of dramatically different iterations (Merlin 1A, 1B, 1C, and 1D) and is scarcely recognizable when its earliest block is compared to its most recent version. Merlin 1A began as an ablatively cooled 340 kN (76,000 lbf) engine, while the current workhorse (generally known as Merlin 1D Full Thrust, M1D FT) features a regeneratively-cooled nozzle and produces more than 840 kN (190,000 lbf), nearly a threefold improvement in thrust. 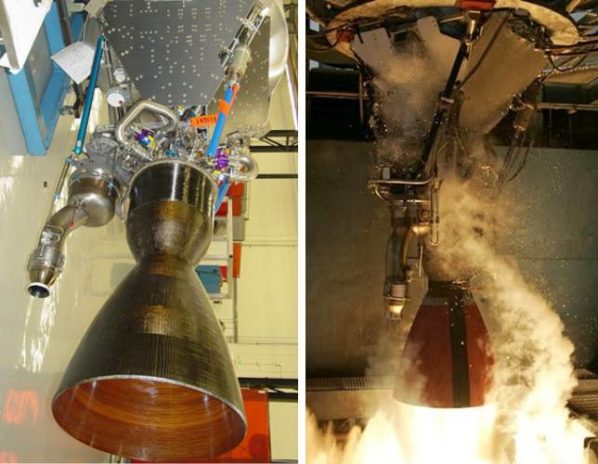 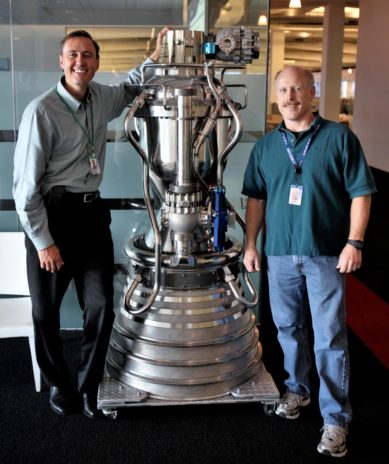 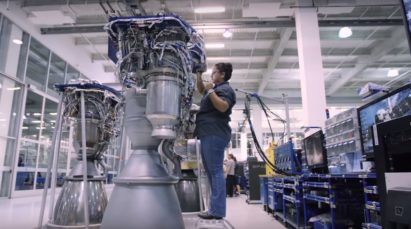 Fresh Block 5 Merlin 1D engines are built and assembled in Hawthorne, CA before heading to Texas for testing. (SpaceX)

An exceptional chart showing the extensive changes SpaceX’s Merlin family has undergone in more than a decade of development and operation. (www.B14643.de)

Raptor’s subscale prototype – featuring twice the chamber pressure of M1D (200 bar, ~3000 psi) and around the same maximum thrust as Merlin 1D (~1000 kN, 225,000 lbf) – can effectively be examined as the Merlin 1A to the Merlin 1C or 1D-class Raptor that SpaceX’s propulsion team settled on after learning from its smaller predecessors.

Performed on a Raptor-specific test cell at SpaceX’s McGregor, Texas “Rocket Ranch”, this milestone static fire was enabled by what one can safely assume were dozens or hundreds of lessons-learned over the course of two years of prototype engine testing and iterative improvement, working up to a quasi-final design that was shipped to Texas and installed just a few days ago. To kick off the first critical static fire of the pathfinder Raptor hardware, reports from ground observers indicate that SpaceX engineers began with a series of extremely short ‘blip’ tests that appeared perhaps 2-3 seconds from ignition to shutdown.

The immensely encouraging news of Raptor Block 1’s first successful static fire comes as SpaceX engineers, technicians, and contractors work around the clock to build both the first full-scale Starship prototype (nicknamed Starhopper) and the spartan pad it will lift off from during hop tests. SpaceX’s Boca Chica facilities were marked by a burst of pad-related activity over the last week or two, including the early installation of a range of pipes (some of it insulated for supercool cryogenic methane and oxygen) and the creation of a berm pointing towards the probable location of Starhopper’s simple launch mount and pad. ‘

While the Starship prototype’s three Raptor engines will dramatically outclass Falcon 9’s Grasshopper and F9R development vehicles (also used for hop tests), it’s possible that the same setup – basically a flat (refractory?) concrete pad with GSE (ground support equipment) protected behind a berm and automated water jet turrets around the vicinity – could work for Starhopper, too. For now, the successful static fire of the first post-development Raptor engine marks a massive step towards those initial hop tests and towards the first orbital launches of Starship and Super Heavy a bit further down the road. Stay tuned as SpaceX continues to extensively test Raptor and build out its Boca Chica pad and Starship prototype.