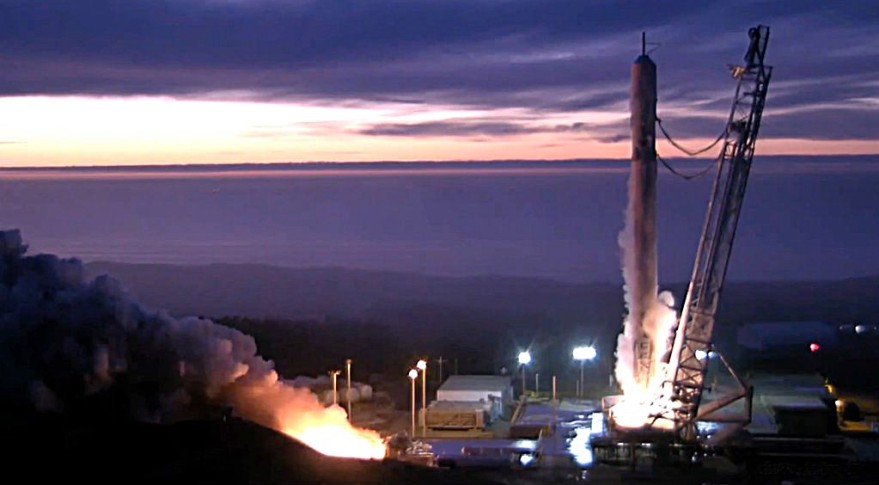 SpaceX completed a successful test firing on Monday of the Falcon 9 rocket that will put an SES-9 communication satellite into orbit on Wednesday.

NASA reports that Space X successfully completed a static fire test Monday afternoon of the Falcon 9 rocket that will lift a Boeing SES-9 communications satellite into geosynchronous orbit over Asia on Wednesday. A static fire test validates the integrity of the launch vehicle and allows SpaceX management to approve the final preparations for launch. The test procedure verified that the Merlin 1D engines responded accurately to ignition and shut down commands, and performed as expected during the start-up sequence. The static fire procedure also provided another opportunity to test the performance of the new supercooled propellant pad systems that were installed recently. After all needed data has been collected and downloaded, the rocket will be lowered onto the Transporter Erector and delivered back to the hanger until launch day on Wednesday.

Liftoff is scheduled between the hours of 6:46 pm and 8:23 pm Eastern time on Wednesday. If the original launch needs to be postponed for any reason, a second launch window will be available on Thursday during the same hours. The Boeing SES-9 satellite has a projected useful life of 15 years. It will provide DTH broadcasting and other communications services in Northeast Asia, South Asia & Indonesia, as well as maritime communications for vessels in the Indian Ocean. SpaceX intends to recover the first stage of the Falcon 9 rocket on board its Autonomous Spaceport Drone Ship (ASDS) landing barge, which is named “Of Course I Still Love You.” A landing at sea is considered a far more difficult task than returning the first stage of the rocket to a land based facility, a feat that SpaceX accomplished successfully for the first time a few months ago. Several recoveries at sea have been attempted. The last one was nearly successful until a latching mechanism malfunctioned and resulted in the rocket tipping over on its side after landing.

SpaceX is currently building a number of new Falcon 9 and Falcon Heavy rockets for its scheduled missions in 2016. One of the most important will be the “SpX-DM1″ flight in December that will take the new Dragon 2 space capsule on an unmanned mission to the International Space Station. If that mission is successful, a manned flight to the ISS, designated SpX-DM2, will take place early next year.