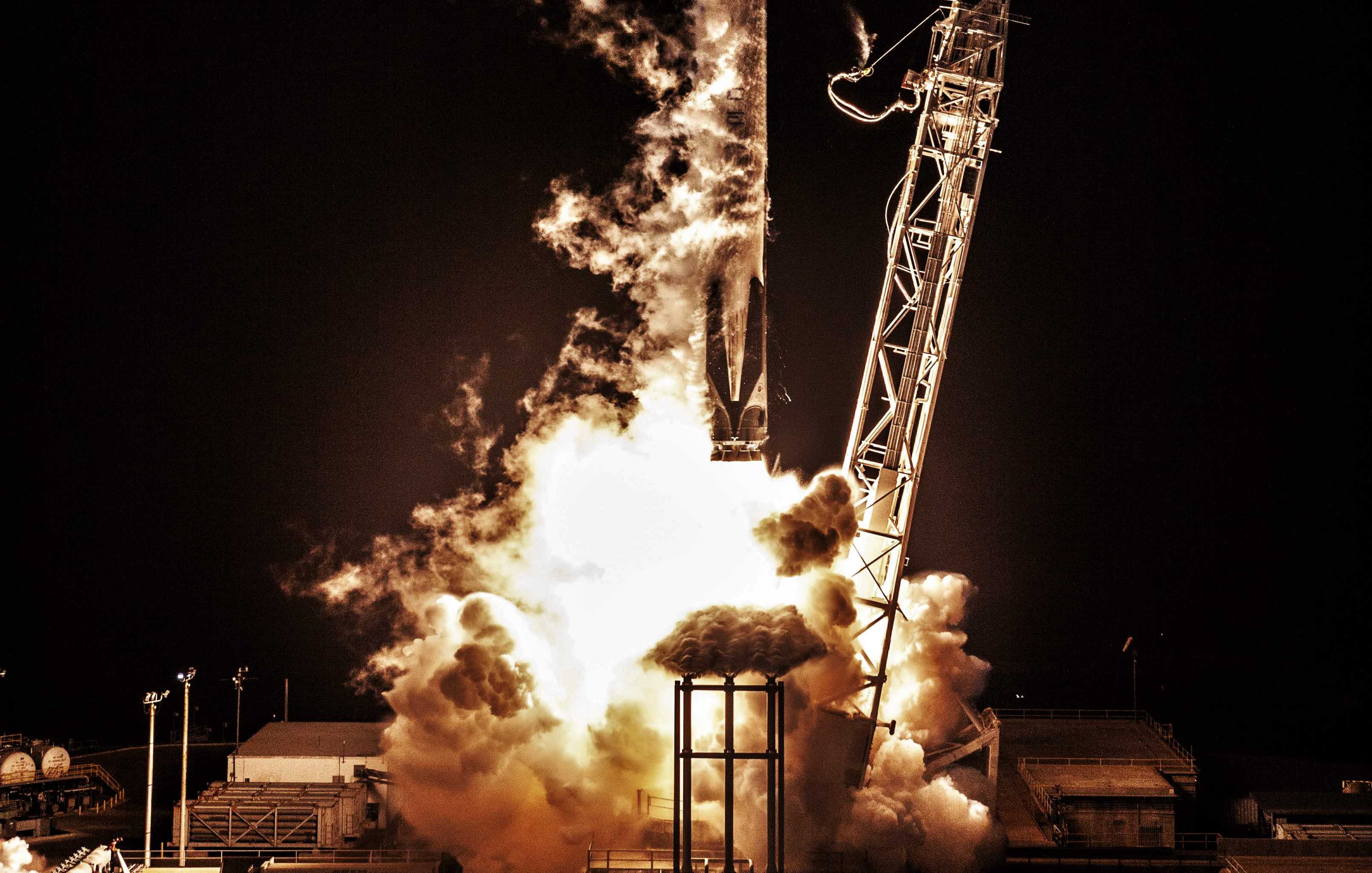 SpaceX plans to launch one final commercial Falcon 9 mission from Pad 39A before much of the historic facility’s availability is taken over Crew Dragon and Falcon Heavy launch needs, perhaps as soon as December 2018.

The reason for the decision to launch a routine Falcon 9 mission from 39A – while Launch Complex-40 (LC-40) is (presumably) perfectly available – is unknown, but it can likely be pinned down to launch schedule assurance and pad shakedowns ahead of the flight debut of Crew Dragon, NET January 2019.

SpaceX Falcon 9 launch with Es’hail-2 has turned up on the Eastern Range as NET November 14. This launch will take place from 39A. Cool photo from Nathan Barker (@NASA_Nerd) from this week below:

Range shows this is an ASDS landing for the booster.

As always, subject to change. pic.twitter.com/yydKuOVXrP

Ultimately, the decision to move the launch of commercial communications satellite Es’Hail-2 to Pad 39A likely boils down to a desire to preserve the delay-sensitive CRS-16 Cargo Dragon launch (NET November 27) while also acting as a sort of ad-hoc shakedown for the pad. 39A has undergone a large number of Crew Dragon-related modifications – some visible but most not – and will have been dormant (at least launch-wise) since Falcon 9 Block 5’s debut six months prior.

Whether or not it’s truly needed, another Falcon 9 launch from the pad will presumably allow SpaceX to work out any new kinks in 39A’s updated ground support infrastructure and perhaps refamiliarize the company’s East Coast launch crew after half a year focused on LC-40 operations. Es’Hail-2 is a ~3000 kg (~6600 lb) geostationary communications satellite to be operated by Qatari company Es’hailSat once it arrives at its final operational orbit.

Despite a recent presentation from SpaceX VP of Reliability Hans Koenigsmann stating that Falcon 9 is capable of returning to launch site (RTLS; i.e. a Landing Zone recovery) while still placing 3500 kg into a geostationary transfer orbit (GTO), SpaceX has filed this launch as an ASDS (autonomous spaceport drone ship) recovery, meaning that it will land aboard Of Course I Still Love You (OCISLY) shortly after launch. Delayed from August 2018, SpaceX may be trying to partially make up for that slip by placing Es’Hail-2 sat in as high of a transfer orbit as possible, potentially cutting weeks or even months off of the time required for the satellite to climb uphill to its operational orbit. 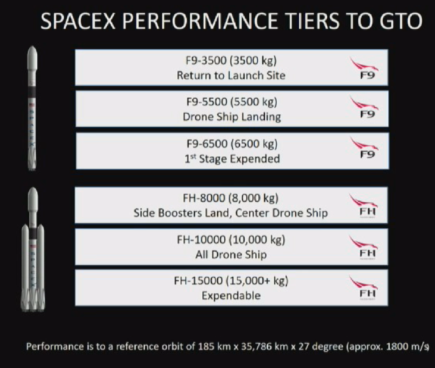 A welcome update to SpaceX’s Falcon 9 and Heavy performance with and without booster recovery. (SpaceX) 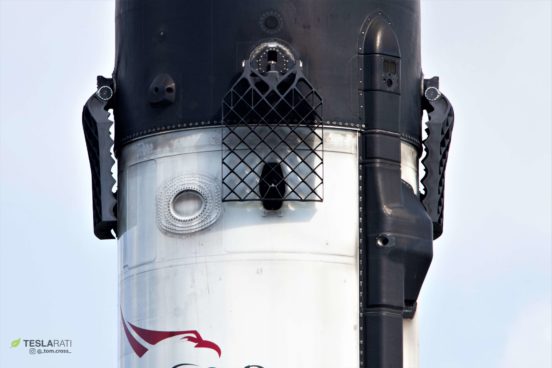 Unusual for SpaceX in an otherwise meteoric year filled with numerous major ‘firsts’ and the company’s most productive launch cadence yet, there will be a two-month lull in launches from the East Coast between Telstar 18V (September 10) and Es’Hail-2 (NET November 14), interrupted only by the spectacular October 7 launch of SAOCOM 1A in California. Barring any additional issues, SpaceX will likely crest its 2017 launch record (18 missions) by 3 or 4 missions, not quite the 25-30 launches much of the company’s leadership was probably hoping for, but still an extremely impressive number.

Despite the fact that launch delays are never pleasant (much like if Christmas were pushed back weeks or months to wait for sleigh and present availability), the willingness to significantly delay launches or fall short of targets (assuming payload availability has not been the long pole) is actually a very good thing. Within reason, inconvenient delays tend to serve as evidence that SpaceX is not succumbing to quite the same level of “Go fever” and manager/engineer/technician disconnection that has arguably been responsible for a huge number of launch failures, particularly for NASA’s Space Shuttle. 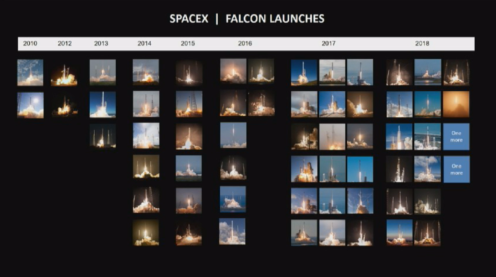 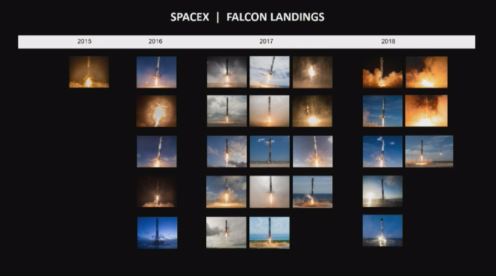 Plenty of landings, too… 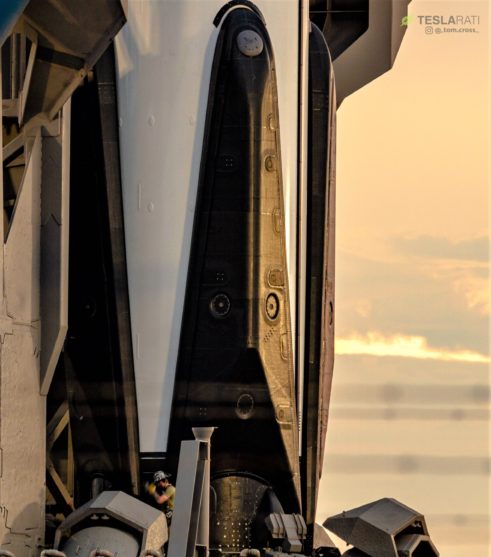 Best described as the point at which non-technical pressures to launch (cost-saving, internal and external politics, general face-saving) far outweigh the voices of the engineers and technicians responsible for reliably designing, building, and launching rockets, “Go fever” is demonstrably one of the worst things that can occur in spaceflight-oriented organizations, where the consequences of even the tiniest failures can often be amplified into total mission and vehicle failures and even the death of employees or astronauts. It may be unpleasant as an unaffiliated follower or fan and is likely far less pleasant still as an employee or manager, but it is undeniably preferable to succeed after weeks or months of delays than to fail catastrophically while staying on schedule.

Speaking of schedules, Es’Hail-2 (39A) is NET Nov. 14, followed by SSO-A (SLC-4E, Vandenberg) NET Nov. 19 and SpaceX’s 16th operational ISS resupply mission – CRS-16 – on Nov. 27th from Pad 40. Heading into the last month of 2018, SpaceX will launch the first of a fleet of new GPS III satellites for the USAF (NET Dec. 15) and finish off the year with a Vandenberg buzzer-beater, the eighth and final Iridium NEXT launch, NET Dec. 30.