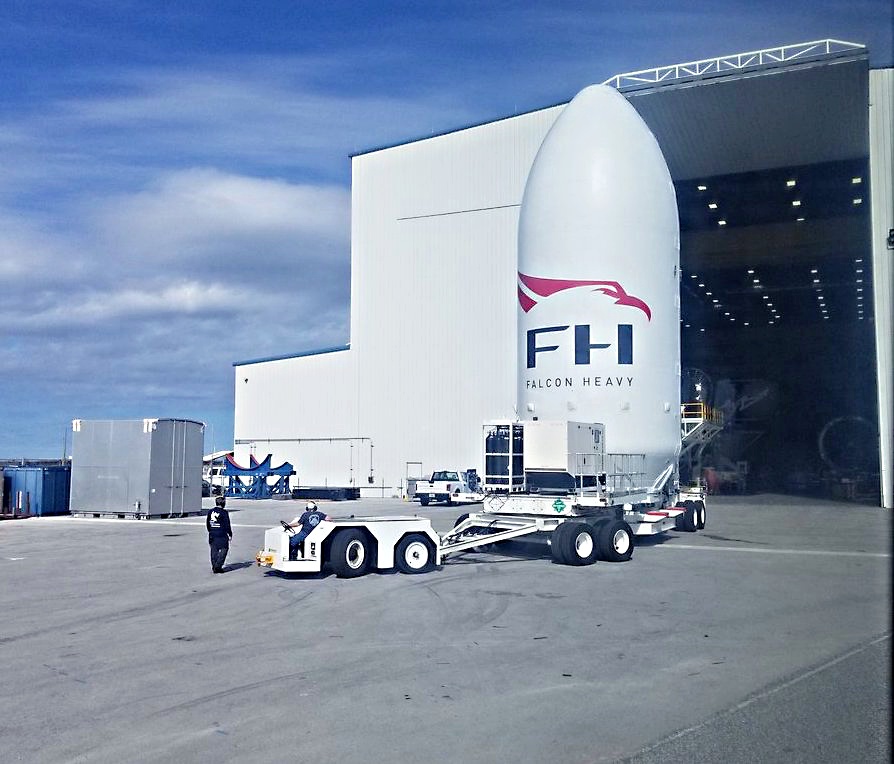 By now, we know Elon Musk wasn’t joking when he announced that the maiden flight of SpaceX’s Falcon Heavy rocket would feature his very own Tesla Roadster as its first payload. Just recently, images of the electric car being installed inside the payload fairing of the massive rocket emerged online. Now, a new picture has been shared on Twitter, seemingly depicting the FH’s completed fairing as it was being transported inside a hangar in NASA’s Kennedy Space Center.

The image tweeted by Emiliano C. Diaz de Leon, who snapped the photo during a bus tour of the facility. According to Diaz de Leon, he and his family were fortunate enough to get a good glimpse of the Falcon Heavy’s payload fairing when the space center’s bus tours stopped by the SpaceX hangar. It was then that he was able to snap a photo of the Falcon Heavy’s second stage.

Falcon Heavy is SpaceX’s most ambitious rocket to date, designed to carry heavy payloads. Its maiden mission, sending the SpaceX founder’s Tesla Roadster to space, is expected to be conducted sometime around January 2018. Other details of the upcoming launch, however, such as its official time and the rocket’s designated pad, have not been released. 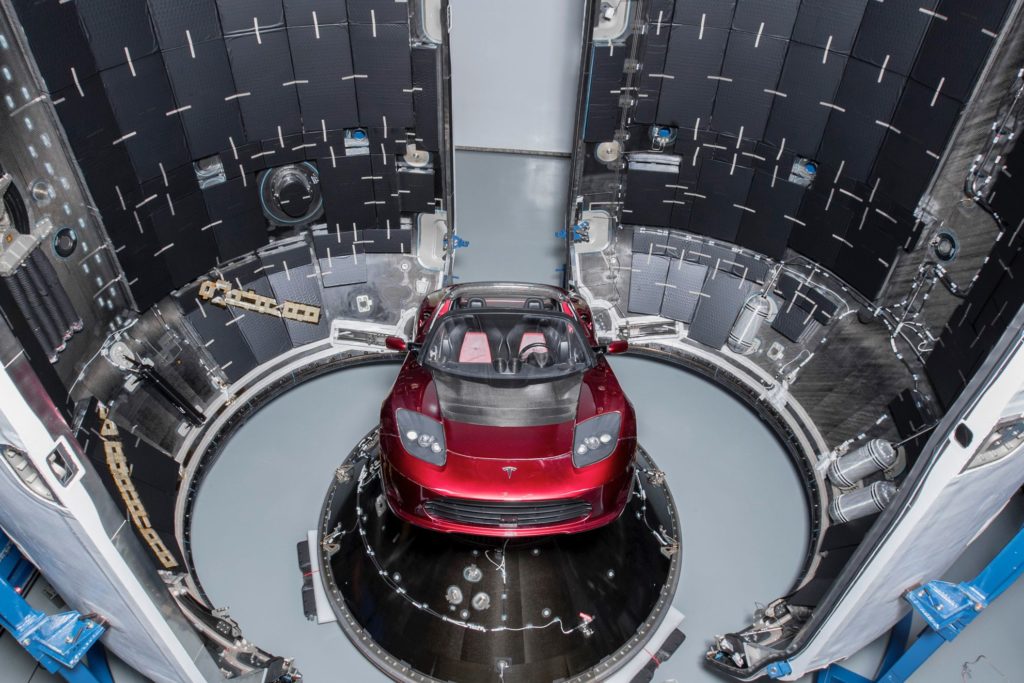 In true Elon Musk fashion, several interesting items would be sent with the Tesla Roadster to space. According to the SpaceX CEO, the electric sports car would be accompanied on its final journey by a copy of Douglas Adams’ “The Hitchhiker’s Guide to the Galaxy,” a towel, a sign that reads “Don’t Panic,” and a track that plays David Bowie’s iconic chart-topping track, “Space Oddity.” These items, together with the Roadster, would likely be sent to deep space, where it would hopefully enter Mars orbit.

We got a sneak peek at @SpaceX #FalconHeavy rocket while taking the bus tour. #SpaceX pic.twitter.com/18gnRCXobF

With the most recent sighting of the Falcon Heavy’s payload fairing in mind, all signs seem to be pointing to the idea that SpaceX is already assembling both stages of its largest and most ambitious rocket. As revealed in a series of image updates by Elon Musk, the majority of the Falcon Heavy is already at Cape Canaveral, FL, and all three of its first stages have been mated together. Considering that the payload fairing has been spotted as well, the Falcon Heavy might be ready for some real testing soon.

The Falcon Heavy holds the potential to be a true game-changer in the commercial space industry, with its first stage being made up of 27 Merlin engines from three Falcon 9 cores. According to SpaceX, the configuration will allow the rocket to generate more than 5 million pounds of thrust at liftoff, the same thrust as fifteen 747 jumbo jets at full throttle. The Falcon Heavy is also capable of transporting more than 140,000 pounds of cargo, which is more than twice the payload capacity of the Delta IV Heavy rocket, the FH’s closest competitor.

SpaceX initially unveiled the Falcon Heavy back in 2011, with a tentative 2013 maiden launch date. Due to a series of issues with several Falcon 9 rockets, however, the debut of the Falcon Heavy was continually pushed back. Nevertheless, despite being several years late from its initial 2013 estimate, the Falcon Heavy’s imminent launch this January 2018 definitely seems to be well worth the wait.