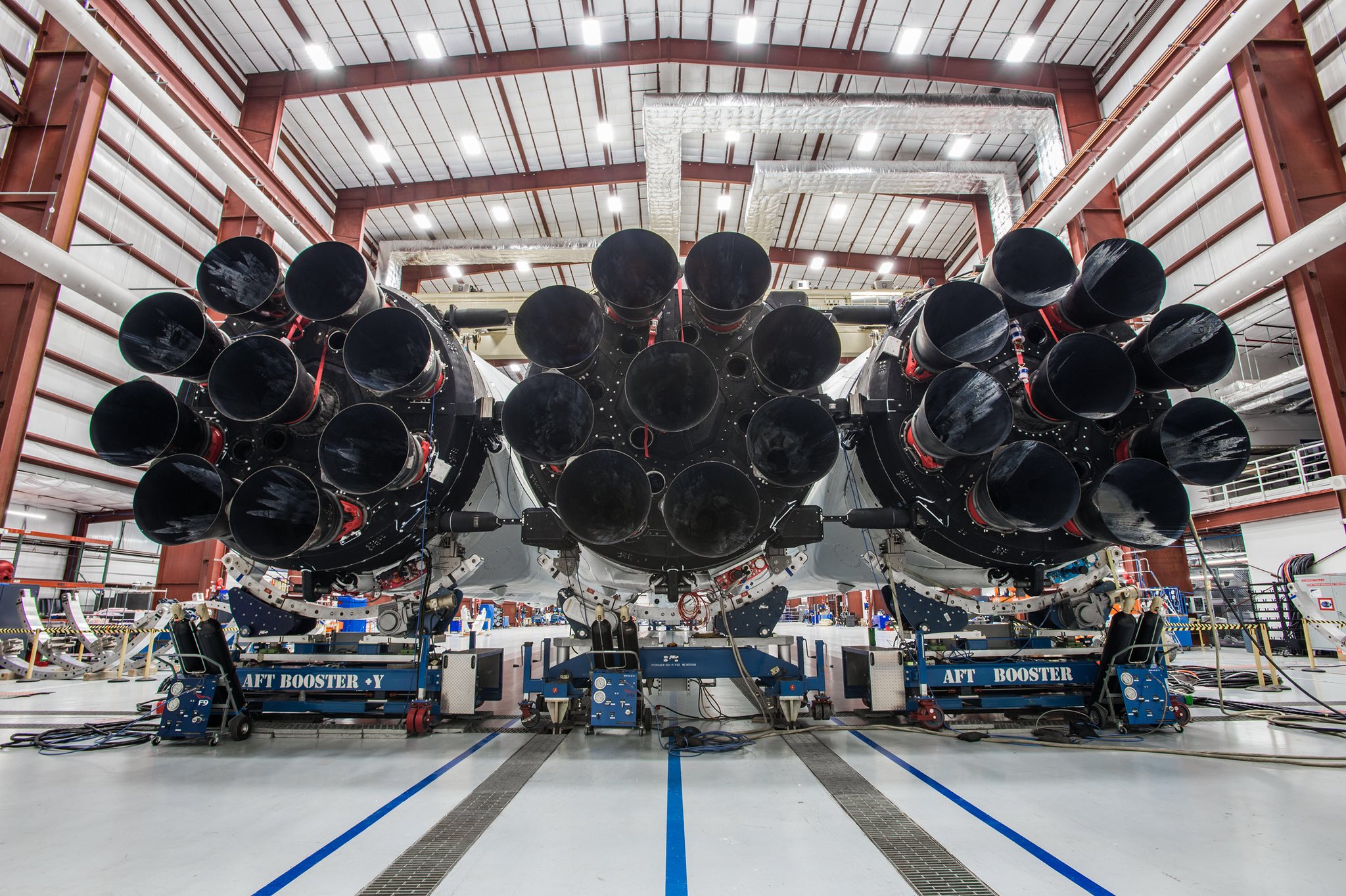 For the first time in SpaceX’s history, the company is close enough to the inaugural launch of its massive Falcon Heavy rocket that the vast majority of the vehicle is already at Cape Canaveral, FL, and all three of its first stages have been mated together. 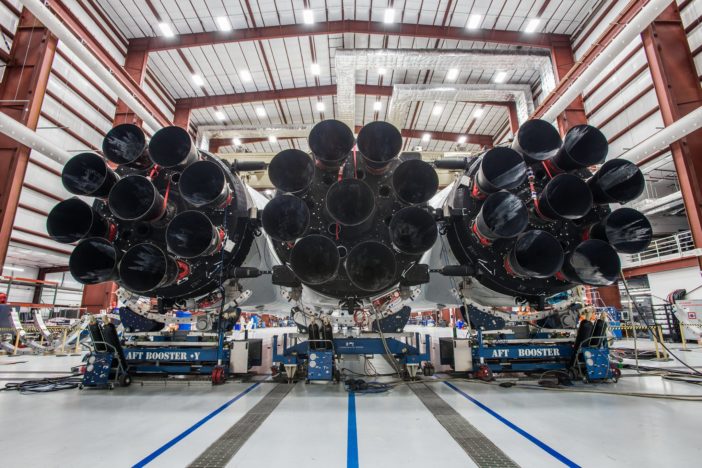 We know this because Elon Musk took to Instagram and Twitter last night and posted the first-ever real-life photos of the launch vehicle, currently stationed at the Horizaontal Integration Facility (HIF) at SpaceX’s LC-39A launch pad.

At launch, Falcon Heavy will only be surpassed in thrust and payload by the megarockets of the 1960s, the US Saturn V and the Soviet N-1. Best described by an eager employee, Falcon Heavy will have the same thrust as fifteen 747 Jumbo Jets at full throttle, and could nearly carry a fully-loaded 737 passenger jet into low Earth orbit (LEO) in a fully expendable configuration.

Over the past several weeks of inactivity, SpaceX’s pad technicians have been hard at work modifying the LC-39A launch pad and its Transporter/Erector/Launcher (TEL) to support the inaugural launch of Falcon Heavy. This mainly involved considerably upgrading the water deluge system used to muzzle the impact of the sheer sound created at launch, but also required the addition of four more hold-down clamps, necessary to abort a launch after engine ignition. An additional array of communications wiring and umbilical connections for fueling have also likely been added to the TEL in order to support the requirements of what are essentially three simultaneous Falcon 9 launches. 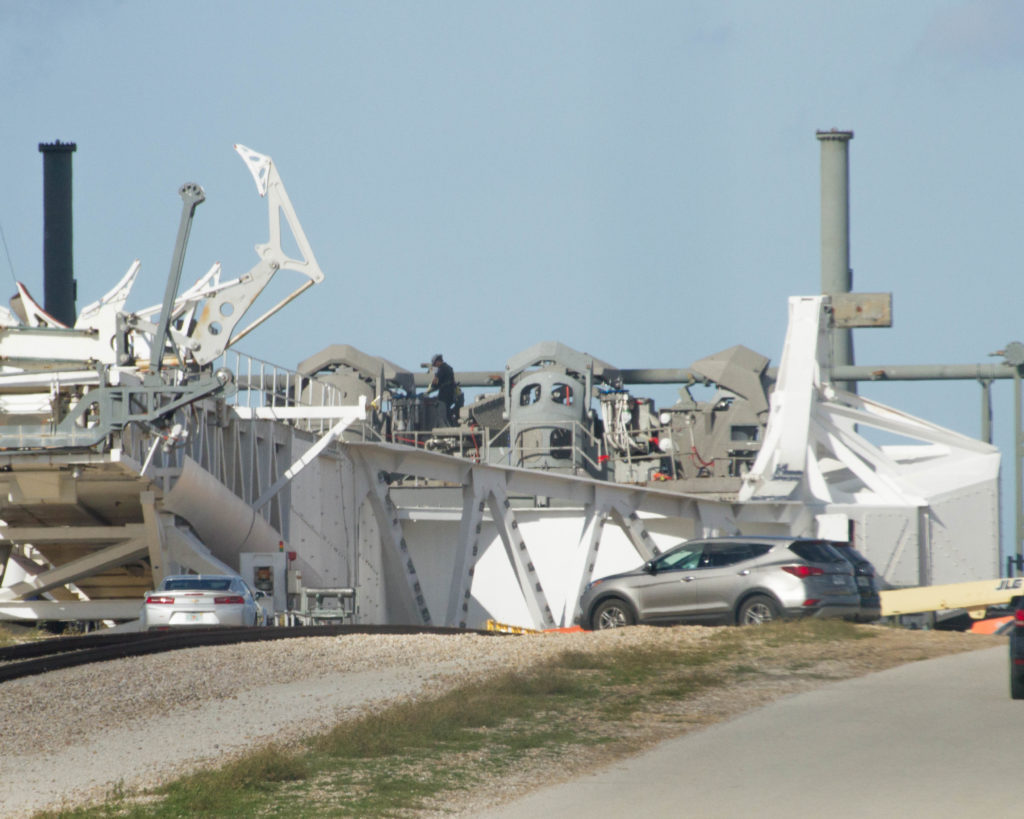 Pad 39A’s TEL undergoing modifications. Hold-down clamps are the grey enclosures seen at the end of the TEL. Note the worker standing in the middle for a sense of scale. (Tom Cross/Teslarati)

A lack of frenetic activity at the pad in the last handful of days suggests that those modifications are nearly complete, and SpaceX fans and followers are now eagerly awaiting the rollback of the TEL to 39A’s integration facilities, where Falcon Heavy will soon after be integrated with the TEL for the first time ever. After this milestones, we can expected Falcon Heavy to be rolled out the pad for what is known as a wet dress rehearsal (WDR), akin to a launch or static fire but without any engine ignition. It’s possible that a bug-free WDR could fluidly transition into the first static fire for the vehicle, but it is probable that SpaceX will take a more cautious approach with this launch campaign. Following the successful completion of the WDR and static fire, Falcon Heavy’s inaugural launch will be imminent. We are potentially no more than 40 days out, the closest SpaceX has ever been to a Falcon Heavy launch.

Of note, the final picture posted by Musk offers an absolutely stunning view of the vehicle’s business end, showing off its 27 Merlin 1D engines and revealing quite obviously that both of Falcon Heavy’s side cores are flight-proven, whereas the center core is new. The photos provided also offer a glimpse of the only component clearly missing, the second stage and its mysterious Tesla Roadster payload. Unconfirmed whispers in the fan community have it on good authority that the Roadster has in fact already been mated to the second stage’s payload adapter, and transport to the Cape and integration with the full Falcon Heavy stack are undoubtedly imminent.

Falcon Heavy at the Cape pic.twitter.com/hizfDVsU7X

Possibly most significant of all, Musk suggested that the Roadster payload would be sent on a course to Mars, although it has yet to be concluded whether that will be in the form of a general orbit similar to Mars or an actual trans-Martian injection culminating in an orbit around the Red Planet. The former is far more likely, but the latter would be an extraordinarily impressive test of SpaceX hardware in deep space, a necessary precursor for the company’s goals of interplanetary colonization. Time will tell, and in the meantime we can expect a veritable flood of rocket and payload photos as SpaceX rapidly approaches a historic moment for the company.

Be sure to follow us on Instagram as we go bring you live video and behind the scenes coverage from Cape Canaveral at each SpaceX launch!