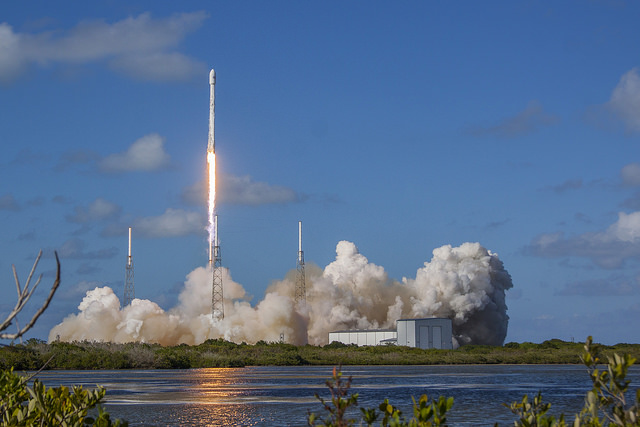 NASA may be truly making progress, but when compared to SpaceX, it seems more like thus far, they just have a guitar amp that “goes to 11”.

Unless you live under a rock (where exactly are these rocks, anyhow?), you’ve heard the news that SpaceX completed the 4th successful first stage landing of its Falcon 9 rocket after launching to a very high orbit. This was the third one in a row to land on an oceangoing droneship, setting the event up for a pathway to becoming routine business.

Waiting for Falcon 9 at the Park

I was in Florida last week and had the opportunity to go to Jetty Park in Cape Canaveral to watch the launch on its first scheduled date of Thursday, May 26th. Unfortunately, I had to catch a flight before the next launch window opened after the first one was scrubbed, and I ended up catching the live stream from home on Friday; however, I still don’t regret having rearranged my flights to be there Thursday. Seeing the enthusiasm for the launch first-hand isn’t something I could have fully appreciated from a webcast.

Cars were piled in all over the park by the time the original launch time arrived. People were under sun shades, having picnics, and there were even a few tailgaters – an awesome concept in itself. The only damper is the inability to guarantee the launch will actually happen as scheduled, but since when has that impeded a viable tailgating excuse?

I’m not sure whether this type of activity happens for all launches, but it made me think about some of the discussions and my observations from earlier in the week.

SpaceX at the Space Congress

I also attended the first day’s events for the 44th Space Congress wherein commercial space technology was the primary topic. Bob Cabana, former space shuttle astronaut and current director of the John F. Kennedy Space Center, was the keynote speaker to kick off the event.

While taking questions, an audience member mentioned that her neighbor thought NASA had been “shut down”, and more audience members concurred that they’d had similar discussions with others. The purpose of the question was to gather Cabana’s opinion on why people weren’t more aware of NASA’s activities, but he didn’t entirely have an answer. I later overheard him speaking to someone else about how they were doing so many “great things” and didn’t understand why people weren’t more aware of them. As a SpaceX enthusiast, of course, I found the problem amusing. I mean, rockets involve at least 99 problems, but SpaceX does not have one with publicity. [Sorry, I had to.]

However, I still questioned why SpaceX was having an awareness impact on space travel that NASA, in all its social media, outreach efforts, and resources couldn’t seem to mirror. Was it that the technology SpaceX was developing more reminiscent of Hollywood and science fiction? Was it all just better marketing overall? Better video music?

After more questions and a short break, the panel on the progress being made in NASA’s Commercial Crew program began with guests Danom Buck from Boeing and Benji Reed from SpaceX. The Commercial Crew program involves the development of the next generation of transport technology for human space travel to and from the International Space Station (and eventually beyond). Or in other words, it’s the program to get America launching people from American soil again rather than buying rocket seats from the Russians.

The overall panel discussion was interesting, but I will admit that I kept waiting for Boeing to get to the “good” part.

As a member of the general public, my interpretation of their technology was that it was a reworked version of the capsules used on the Apollo program and not much else. Their landing system consisted of high-speed-impact capable air bags versus SpaceX’s propulsive landing, i.e., “hovering”, Dragon capsule.

While I understand that there are significant improvements in the works with Boeing’s craft, I know I’m not the only one to be unmoved by the lack of apparent novelty in the landing system, particularly because I had recently seen this video of Elon Musk responding to an MIT student’s question comparing SpaceX’s system to Boeing’s:

I kept waiting for the right question to break down the professionalism between the two company representatives (“Fight! Fight! Fight!”), but alas, nothing of the sort happened. I wasn’t entirely convinced that Danum was very excited about Boeing’s technology, either. Maybe I wasn’t being fair to Boeing. After all, Benji’s presentation began with this familiar SpaceX recap video: I did get a chance to ask Benji my own question wherein I inquired about how much technology crosses over between the Dragon capsule’s propulsive landing system and the Falcon 9’s first stage landing system. I was curious whether it was mostly just software sharing since landing the crafts were likely to use similar calculations, but the equipment involved was too different to be relatable.

His response consisted of an explanation about how the development environment at SpaceX is set up to encourage collaboration among systems engineers (open floor layout, connected teams next to one another). Implied answer: He either wasn’t sure specifically but assumed there was some crossover, or he knew some specifics, but wasn’t going to give them for one reason or another. Or perhaps it was some mix of the two.

Cue Lunch and the Next Panel

The speaker during lunch was Col. Eric Krystkowiak, the 45th Space Wing Launch Group Commander. The 45th Space Wing Launch Group is located at Patrick Air Force Base in Cape Canaveral, Florida where the May 27th Falcon 9 lifted off from. The first Falcon 9 ground landing also took place there, something Col. Krystkowiak spoke about during his presentation: “They’re thinking…still can’t believe the Air Force let us do that.” As a lifelong Air Force brat, I may have been partial in my reception to the talk due to the familiar social gathering “zone” it reminded me of.

The presentation format and overall humor were very good (isn’t anything that quotes Seinfeld?), and although they have to remain impartial as government representatives, it certainly felt as though the Air Force genuinely liked the SpaceX team and was leaning towards their business model to support in their commercial spaceflight customer service role moving forward. Perhaps they just appreciate SpaceX’s wherewithal and determination to push through bureaucracy to really enable innovation.

Oh, and I think someone asked about the lawsuit SpaceX filed against the Air Force, but I don’t remember the specifics of either the question or the answer. Hey, it was lunch time!

Jumping forward again to the original Thursday launch date, once it was clear the launch was not happening before my flight home (shout out to the very nice lady listening to the AM radio updates), I had to book it to the airport. Then, ironically, it turned out my Uber driver had spent seventeen years as a defense contractor with Raytheon working on satellite technologies.

It really was a space kind of week!

Space geek that I am, I took the opportunity to have him provide first hand insight into what that type of job was like. I was particularly interested in why contract work like that always went over time and over budget. His answer was that essentially, when NASA approaches its contractors, they are asking for things to be done that have never been done before, thus it’s hard to predict exactly what the future will hold as far as the development of the technology.

Fair enough, but once again, SpaceX shines here. There’s never been a company quite like them before, doing quite the things they’re doing in quite the way they’re doing them.

Maybe just being first has its merits? After all, history tends to reward the winners. Most Americans don’t know who the first American in space was, but they know the Russians beat us there to begin with, and they know we beat everyone to the Moon. Then again, Sally Ride tends to be mistaken by Americans as the first woman in space, but Russian Valentina Tereshkova was actually first.

The question of what makes SpaceX so different in marketing space technology is still a difficult one for me as my personal reasons for admiring their progress has little to do with the aesthetics of the achievements. I admire the true progress they’re making and the relatability of what they’re developing to what their larger goals are.

NASA may be truly making progress towards a “Journey to Mars”, but when compared to the advancements SpaceX has achieved, it seems more like thus far, they just have a guitar amp that “goes to 11”.

Author’s Note: I’ve uploaded more pics of the Space Congress and the park on launch day to my Flickr account. Nothing spectacular – just FYI.