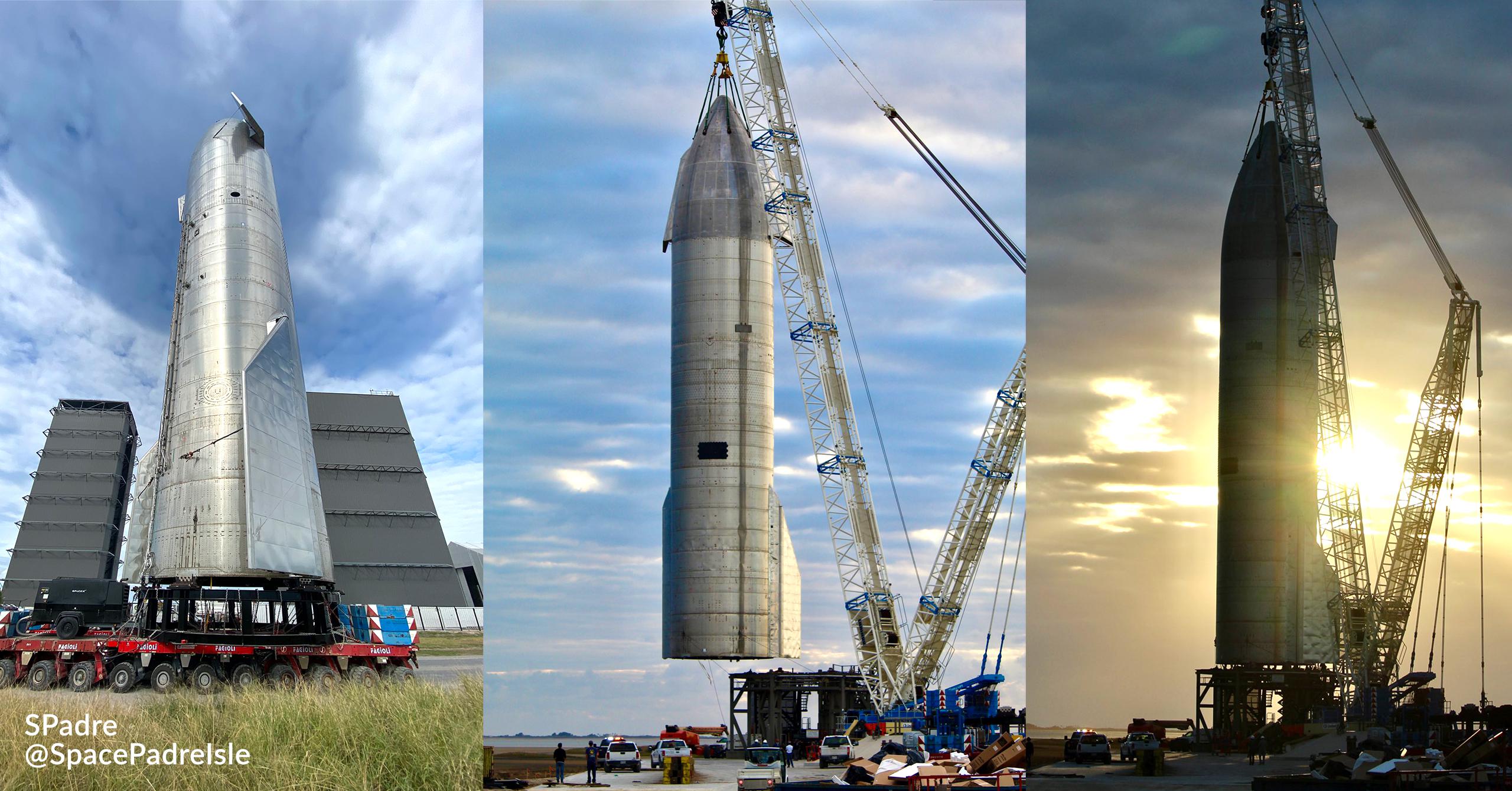 Starship SN9 has been repaired and moved to the launch pad less than two weeks after suffering damage from a handling accident. (Space Padre Isle)

Update: Right on schedule, SpaceX rolled Starship serial number 9 (SN9) out of its ‘high bay’ assembly roost and transported the 50-meter-tall (~165 ft) stainless steel rocket to a launch pad about a mile down the road.

Wasting no time at all after having preemptively delivered a large crane from factory to pad the day prior, SpaceX began the process of lifting and installing Starship SN9 on one of two simple launch mounts less than three hours after arrival and began securing the rocket to the stand less than an hour after that. As discussed below, it’s nothing short of spectacular (and possibly unprecedented) that Starship SN9 was a victim of a workstand collapse, suffered some damage as a result, had that damage repaired or parts replaced, and was ready to roll to the launch pad to start pre-launch testing within a span of eleven days.

Additionally, SN9’s arrival means that SpaceX has now delivered a second complete Starship less than two weeks after Starship SN8 became the first full-size prototype to launch to high altitude atop multiple Raptor engines and skydive back to Earth. With the landing pad yet to be fully cleared after that launch debut, the crash-landed wreckage of SN8’s nose is even visible behind Starship SN9 in unofficial coverage of the new rocket’s pad transport and launch mount installation. As of December 22nd, SpaceX has one more road closure scheduled on Dec 23, followed by a trio from 8 am to 5 pm CST (UTC-6) from Dec 28-30. Stay tuned for updates as SpaceX prepares the second full-size Starship ever for tank proof and static fire testing!

A handful of days after a workstand collapse threatened to end SpaceX’s next high-altitude Starship before it could leave the cradle, the rocket appears to have shrugged off whatever damage was caused with ease.

On the morning of December 11th and less than 24 hours after SpaceX investors and VIPs like COO Gwynne Shotwell and CEO Elon Musk were standing almost underneath the rocket, an unknown issue cause Starship SN9’s workstand to partially collapse. Seemingly through sheer luck, the part of the circular stand that collapsed was towards the corner of the ‘high bay’ building housing SN9, causing the rocket to tip around five degrees before colliding with the wall’s steel frame.

Again, by some stroke of luck, the same angle of Starship SN9’s fall that prevented the rocket from tipping over onto Super Heavy’s in-work tank section (with workers possibly inside) seemingly allowed its flaps to absorb the bulk of that impact. One of two pairs used to keep the ship steady during a skydiver-like freefall maneuver, SN9’s forward and aft starboard flaps suffered obvious damage, perhaps unintentionally functioning like the crumple zones designed to protect passengers during car crashes.

Aside from one or two subtle dents caused by the thoroughly off-axis stresses, the rest of the fully-assembled vehicle remained visibly untouched, though it was a near-complete unknown if Starship was capable of surviving such an ordeal. For 99% of the world’s rockets, almost all of which are either built out of aluminum or carbon fiber, tipping from a vertical position into a steel wall at anything less than a snail’s pace would likely be the end of any normal propellant tank – probably up to and including even SpaceX’s own reusable Falcon boosters. At a minimum, extensive repairs would be required.

On December 20th, nine days after the incident and six days after a crane lifted SN9 back into a stable position, SpaceX quietly replaced the Starship’s crumpled forward flap after having removed both damaged flaps in the days prior. The installation of that replacement flap – possibly taken from Starship SN10’s nose – all but confirmed a best-case scenario, as it would be hard to remove the damaged hardware and install a new flap so quickly if the underlying hinge and mounting mechanisms had been damaged in the fall. If only the aft – but not forward – flap mechanism was somehow damaged, it would also make little sense to install a new forward flap.

Meanwhile, in another kind of encouraging sign, SpaceX moved the crane needed to lift Starships onto the launch mount from the build site to the launch pad on December 21st – right on schedule. It’s extremely unlikely that SpaceX would complete that move unless it was confident that a Starship prototype would be ready to roll to the launch pad, further implying that Starship SN9 really has shrugged off its workplace accident after less than two weeks of delays. Stay tuned for updates – road closures that could be used to transport SN9 are still in place from around 8 am to 5 pm CST on December 22nd and 23rd.