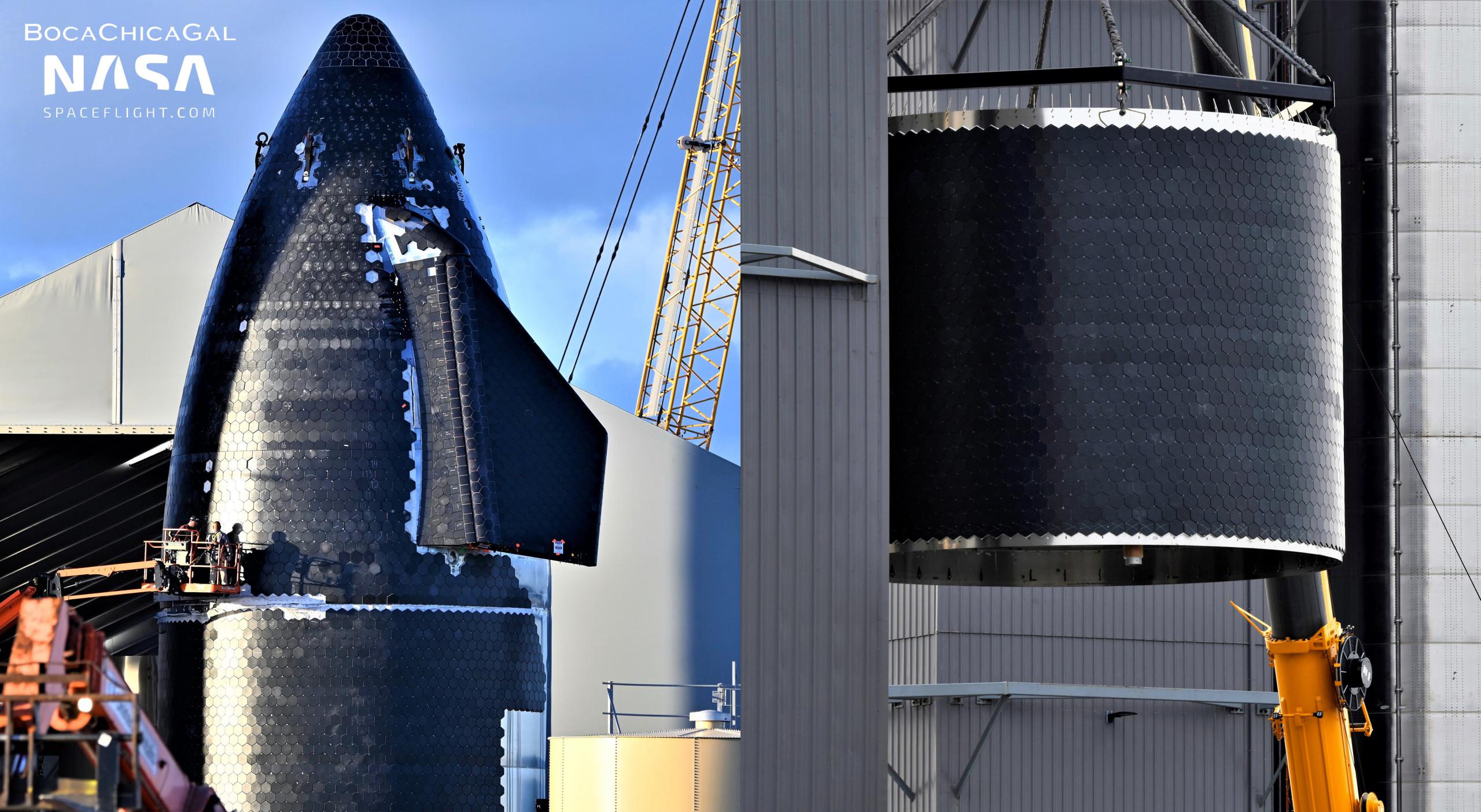 As of late November, SpaceX has begun stacking two Starship prototypes simultaneously for the first time in ten months.

Known as Starship S21 and S22, SpaceX began stacking the latter prototype inside Starbase’s ‘midbay’ in mid-October – the first Starship assembly work seen in more than two and a half months. For about half a year, SpaceX has been significantly more focused on Super Heavy production as it works to thoroughly test a booster for the first time. In the interim, the assembly of Starships – which already have an impressive history of ground and flight tests – slowed to a halt, though the production of Starship parts did not.

SpaceX builds Starships by forming structures and rings out of rolls, sheets, and billets of steel. For noses, domes, and header tanks, laser or waterjet-cut steel ‘gores’ (a bit like pizza slices) are welded together. Rolls of sheet metal are unspooled, cut into sections, and welded into individual rings that are then stacked on top of each other and robotically welded together around their circumference. Those ring sections – 9m (30 ft) wide and ranging from 2-4 rings tall (3.6-7.3m or 12-24 ft) – are then outfitted with stiffener rings and stringers to add rigidity and strength.

Once that basic structure is complete, parts are cut out or welded on to create structural supports, pass-throughs, and mounts for avionics (batteries, wiring, power, comms) hardware, plumbing, mechanical systems, and more. In the case of ships, robotic arms also weld on thousand of studs that eventually become anchors for heat shield tiles. At some point, certain partially-finished ring sections are ‘sleeved’ around tank domes, of which Starship and Super Heavy both have three. Finally, at some point in the early ‘life’ of a Starship or Super Heavy, SpaceX begins assembling the actual vehicle out of that collection of different sections. While weeks or even months of work always precede that milestone, the first stack is still the point at which SpaceX decides to turn those parts into an actual vehicle – never a guarantee, no matter how far along those parts appear to be.

In the very near future, Starship S21’s tank section will be rolled from midbay to high bay for nose installation and Starship S22’s tank section will be topped off with its engine section and leg skirt. Perhaps as early as January, both ships could be fully stacked and more or less waiting in line for qualification testing ahead of Starship’s first few orbital launch attempts. Meanwhile, SpaceX is simultaneously preparing sections of Starship S23 and Super Heavy boosters B6 and B7 for possible assembly late this year or early next.