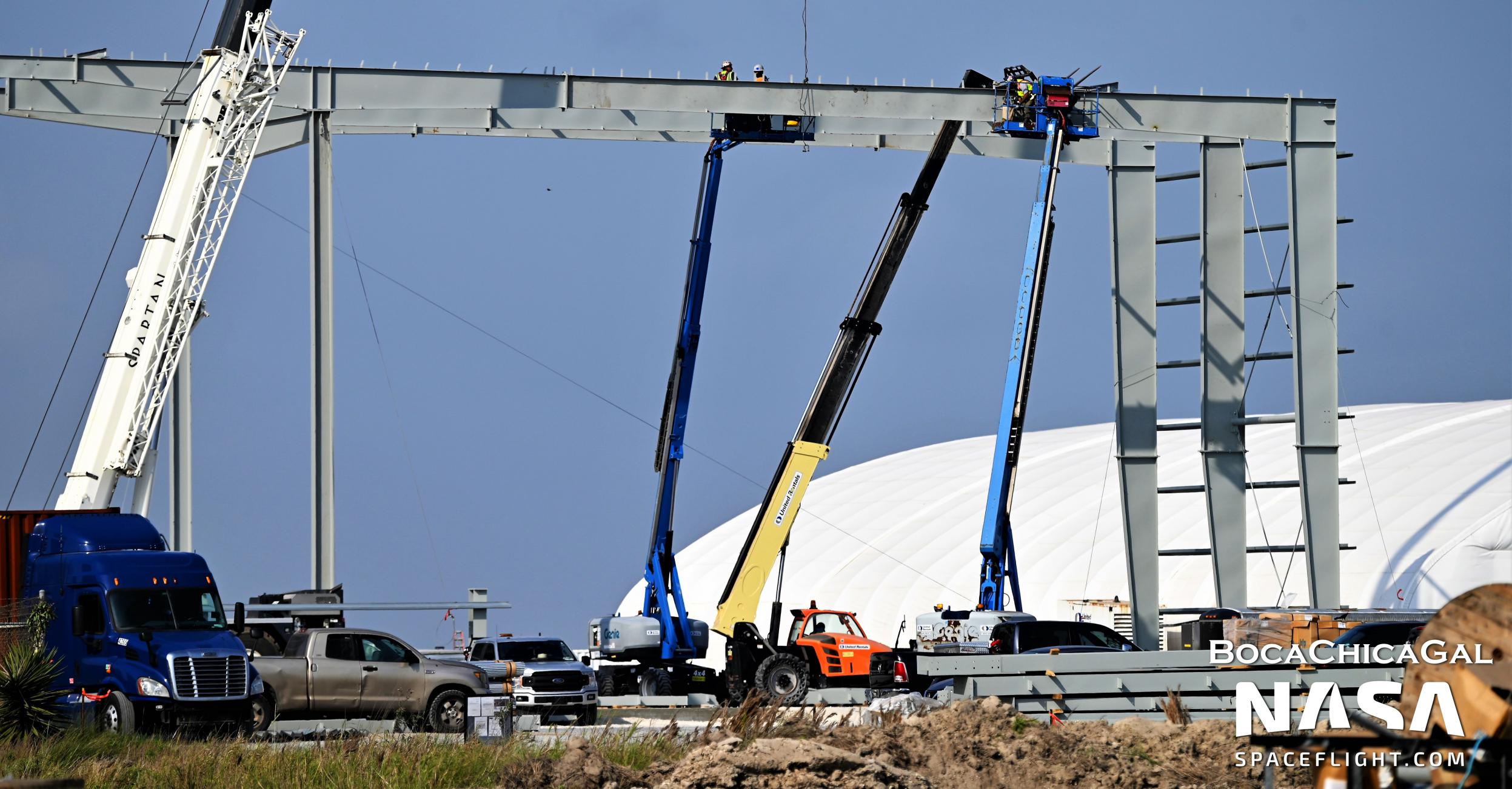 After a few months of foundation work, SpaceX has begun assembling the first section of a vast new Starship manufacturing building that will eventually replace a series of tents also known as ‘sprung structures’.

SpaceX and its contractors began erecting those tents in late 2019 after a mostly successful series of tests involving Starhopper – a steel rocket built on an unprotected concrete lot – and shortly before a less successful attempt at testing the first truly Starship-esque prototype. Inside and around those new tents, SpaceX took steps to significantly upgrade its Starship production methods and assembly facilities, ultimately settling on a process that is still very familiar more than two years later.

Nonetheless, in typical SpaceX fashion, the company appears to have outgrown those tents and set its sights on constructing a brand new Starship manufacturing facility – traditional roof and all – that will likely replace most or all temporary Starbase structures in the near future.

As previously discussed on Teslarati, documents submitted to a Florida water management agency have already revealed plans for a similar East Coast Starship factory and shed light on what the first unofficially named ‘Starfactory’ might look like in Texas.

“According to RGV Aerial Photography, SpaceX…aims to replace all of Starbase’s tents with a single 300,000 square-foot (~28,000 square-meter) building that will be about 18 meters (60 ft) tall and likely measure around 800 feet (250m) long and 400 feet (120m) wide. Starbase’s tents are roughly the same height, but their tented roofs mean that only a fraction of that height can be used for ring work and only a fraction of the floor space for taller nose work.

In comparison, a 300,000 square-foot building would have almost two and half times as much covered floor space as Starbase’s three tents – all of which can theoretically be used for ring and nose section assembly. In fact, with a mostly flat 18-meter roof, SpaceX could feasibly expand most ‘stacks’ by a ring or two, which would reduce the number of sections (and thus stacking operations) needed to assemble a ship or booster.”

A month and a half later, SpaceX (or its contractors) began raising the first steel beams of the new building and made significant progress in just a handful of days. The first vertical beam was erected on April 19th. Around 48 hours later, several roof beams measuring a good 200+ feet (60+ meters) wide were assembled out of smaller pieces and installed on top of the structure’s vertical beams. As-is, the structure likely represents a good view of the front profile of the first of three new Starship production buildings that will eventually be joined to form one giant, monolithic rocket factory.

Notably, the skeleton of the building appears to be closer to 40-50 feet tall instead of the 60 feet predicted – short enough that it likely won’t allow SpaceX to increase the height of the different sections of stacked steel rings that make up most of Starship and Super Heavy. It’s possible that another level will be added for utilities and bridge cranes but the framework currently being installed will likely cap the height of Starship sections at five standard rings (9m/30ft tall). It’s not impossible that yet-to-be-constructed sections of the new factory will be taller, but that would run counter to SpaceX’s established method of production, in which Starship sections move through multiple tents throughout assembly and outfitting.

Construction of the new factory began adjacent to Starbase’s existing tents. As work progresses and the framework turns into a real building, it remains to be seen if SpaceX will use the first building to trial a number of production upgrades, fill it with new Starship production equipment under the same paradigm as existing methods, or physically relocate an existing assembly line inside it.