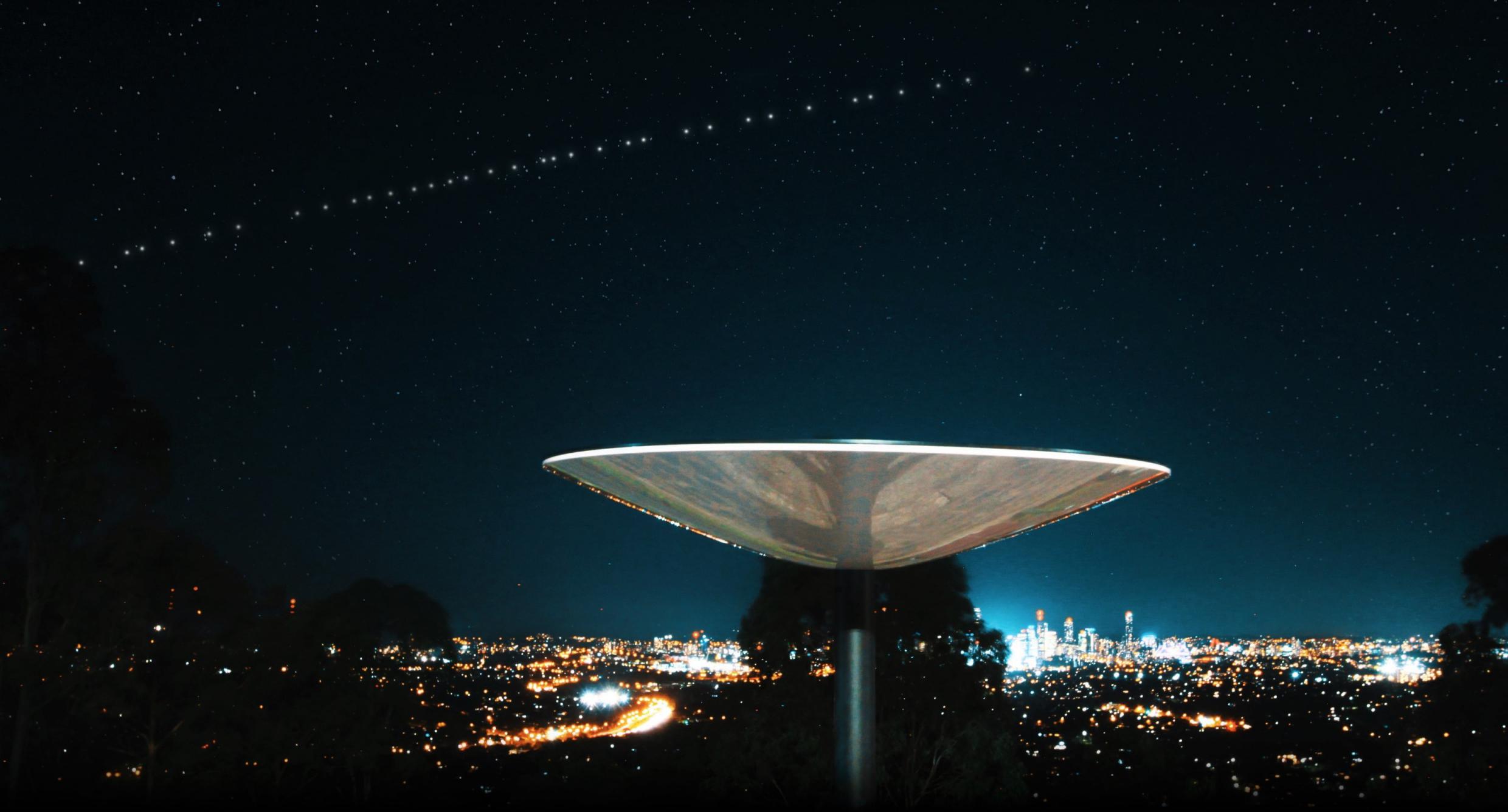 A Starlink dish and satellite train over Brisbane, Australia. (NetVault)

Speaking on a panel at an aviation conference, a senior SpaceX sales executive says that the company is in talks with “several…airlines” to provide in-flight internet to passengers with its Starlink satellite constellation.

Unlike all current in-flight connectivity (IFC) providers, which rely on a handful of satellites in geostationary orbits ~36,000 km (~22,500 mi) above the Earth, SpaceX’s Starlink constellation is currently made up of ~1600 spacecraft just 550 km (340 mi) up – known as low Earth orbit (LEO). Aside from guaranteeing that any uncontrolled spacecraft or debris reenter in just a few years instead of millennia, Starlink’s home in LEO also means that the network can offer far superior latency (also known as ping).

Being more than 50 times closer to the Earth’s surface also makes it much easier for SpaceX to deliver far more bandwidth to a single vehicle. In simple terms, once the Starlink network is decently reliable and its aviation-optimized ‘conformal’ antennas have been refined, qualified, and certified by the FCC and FAA, conditions could quickly become very uncomfortable for incumbents like Gogo and Viasat.

Perhaps not so coincidentally, Gogo’s stock price dropped more than 11% after The Verge’s Joey Roulette first reported on SpaceX’s IFC comments. Closing in on annual revenue close to $1B before the coronavirus pandemic took a sledgehammer to commercial airline travel, Gogo has dominated the western in-flight internet market for about as long as it’s existed. Unfortunately, COVID-19 has not been kind to the IFC industry and Gogo sold off its in-flight internet business to Intelsat – ironically in the midst of bankruptcy proceedings – in late 2020.

For the handful of ailing IFC providers responsible for most in-flight internet services, the arrival of a new competitor – let alone one as promising as Starlink – could scarcely be less welcome. Starlink competitor OneWeb also plans to offer IFC services as early as mid-2022 but the company has been so slow to deploy its already small ~650-satellite constellation that it’s unclear when it will actually be ready to support a significant presence in satellite internet markets.

Starlink, on the other hand, already has more than a thousand operational satellites in orbit, tens of thousands of fixed beta customers actively using the network, and multiple demonstrations of in-flight operations already complete. Notably, while testing just 60 Starlink v0.9 satellite prototypes, SpaceX successfully delivered bandwidth of more than 600 Mbps to a single military aircraft in flight. In comparison, the most cutting-edge Gogo terminal currently promises “speeds of 70+ Mbps” – an order of magnitude less bandwidth saddled with massive latency constraints.

With Starlink’s performance, hundreds of passengers on a single plane could simultaneously stream videos, whereas modern IFC almost invariably prevents even a single paying passenger from streaming video of any kind. Additionally, thanks to the network’s far lower latency, aircraft with Starlink WiFi could feasibly allow passengers to teleconference, make video calls, and even play latency-sensitive multiplayer games while in flight (though whether passengers should be allowed to do so is, of course, a different story).

It remains to be seen when SpaceX might be ready (and certified) to begin connecting commercial airlines to its Starlink network. However, the company has been working on “aeronautical terminals” for more than 16 months and has the distinct benefit of controlling all aspects of its vertically integrated constellation – which is to say that Starlink could be ready for IFC markets far sooner than later.