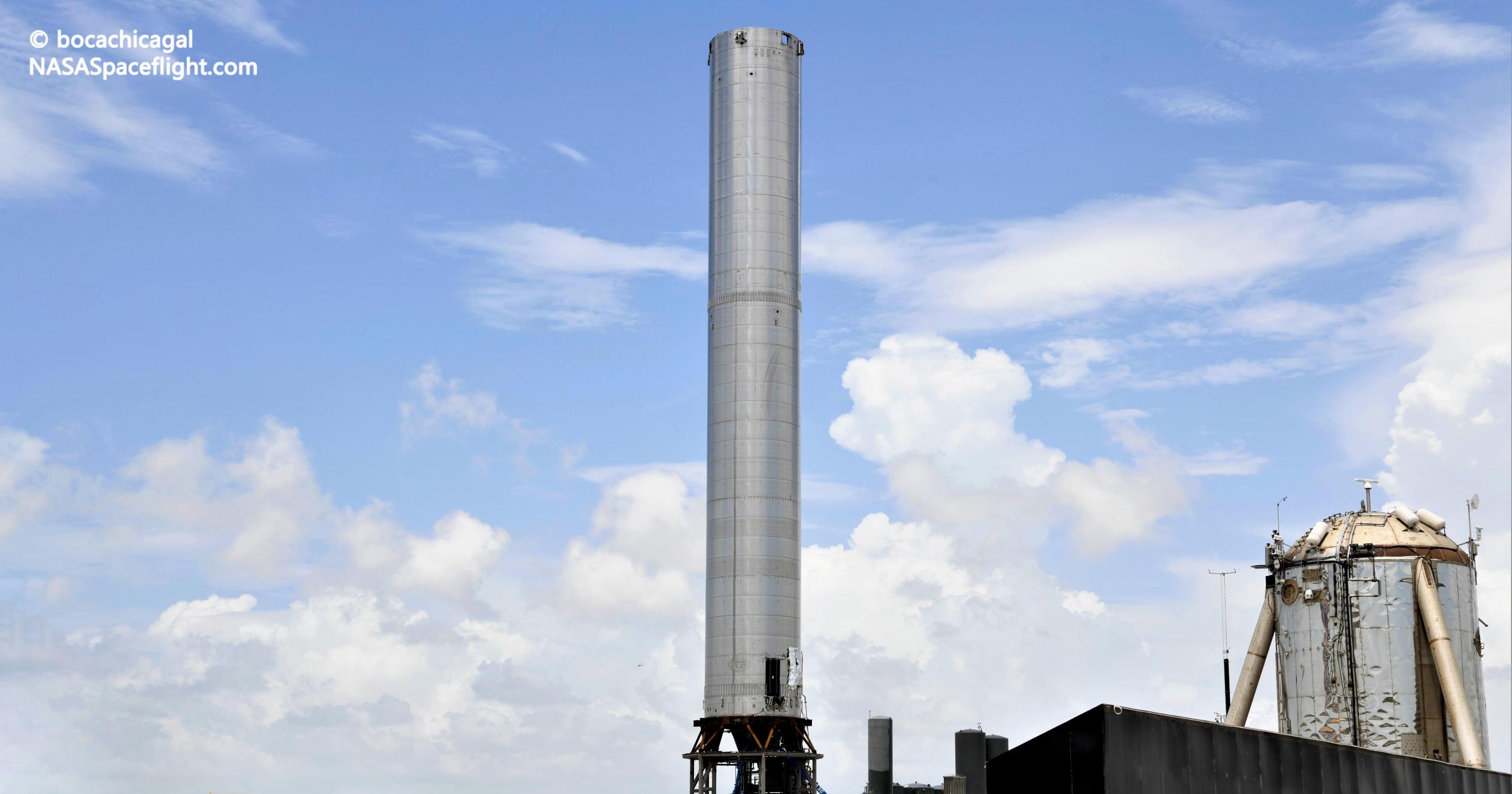 Within the last week, SpaceX’s South Texas Starship factory appears to have kicked things into high gear and are now assembling the first orbital-class Super Heavy booster prototype at a breakneck pace.

While the assembly of the Super Heavy known as Booster 4 (B4) wasn’t too dissimilar to what CEO Elon Musk described as a “very hard” build of Booster 3 up to last week, work on the rocket has visibly accelerated. Since January 2020, the process of building Starships and Super Heavy boosters has been fairly simple. Both onsite and offsite, raw materials (mostly sheet steel) are cut, bent, and welded into relatively small parts that then make their way to (or around) Boca Chica by truck, forklift, or crane.

With the help of jigs and good amount of automation, the resulting hardware is then welded together to form domes, header tanks, transfer tubes, tank barrels, flaps, and more. Once subassembly is complete, those integrated rocket sections are reinforced with stringers, ribs, and baffles and outfitted with mechanisms, hardpoints, brackets, plumbing, and more. Finally, final assembly – better known as stacking and by far the most visible step – can begin and technicians stack each of those premade segments on top of each other to form a complete Starship or Super Heavy.

While part fabrication and subassembly integration take weeks or months on their own, those earlier steps can be done concurrently, meaning that SpaceX can prepare sections for several different ships and boosters at the same time. For the last six or so months, at any given moment, SpaceX has had 40-60+ rings in work as part of 15-20+ different ring ‘sections’ visible all across Starbase.

Respectively, each Starship and Super Heavy booster require 20 and 36 rings apiece, while each of the propellant storage tanks SpaceX itself is building for the rocket’s first orbital launch pad require 12-15. All told, SpaceX usually has a combination of around 3-5 ships, boosters, and GSE tanks in some stage of assembly. Unsurprisingly, some assembly tasks are harder than others and building the first in a series of prototypes has almost invariably taken far longer than building those that follow.

In that sense, it’s not a huge surprise that SpaceX’s Booster 4 assembly has quickly surpassed the pace set with Booster 3 less than a month earlier. SpaceX began stacking Super Heavy B3 around May 20th, starting with the rocket’s aft liquid oxygen (LOx) tank. Five separate stacks are required to turn the LOx tank’s 23 steel rings into a single structure – a process that took SpaceX about a month with Booster 3.

If SpaceX can sustain that pace for another few days, Booster 4 assembly will be the fastest of any full-height prototype ever built at Starbase, most of which have been Starship prototypes that are half to about three quarters the size of Super Heavy.