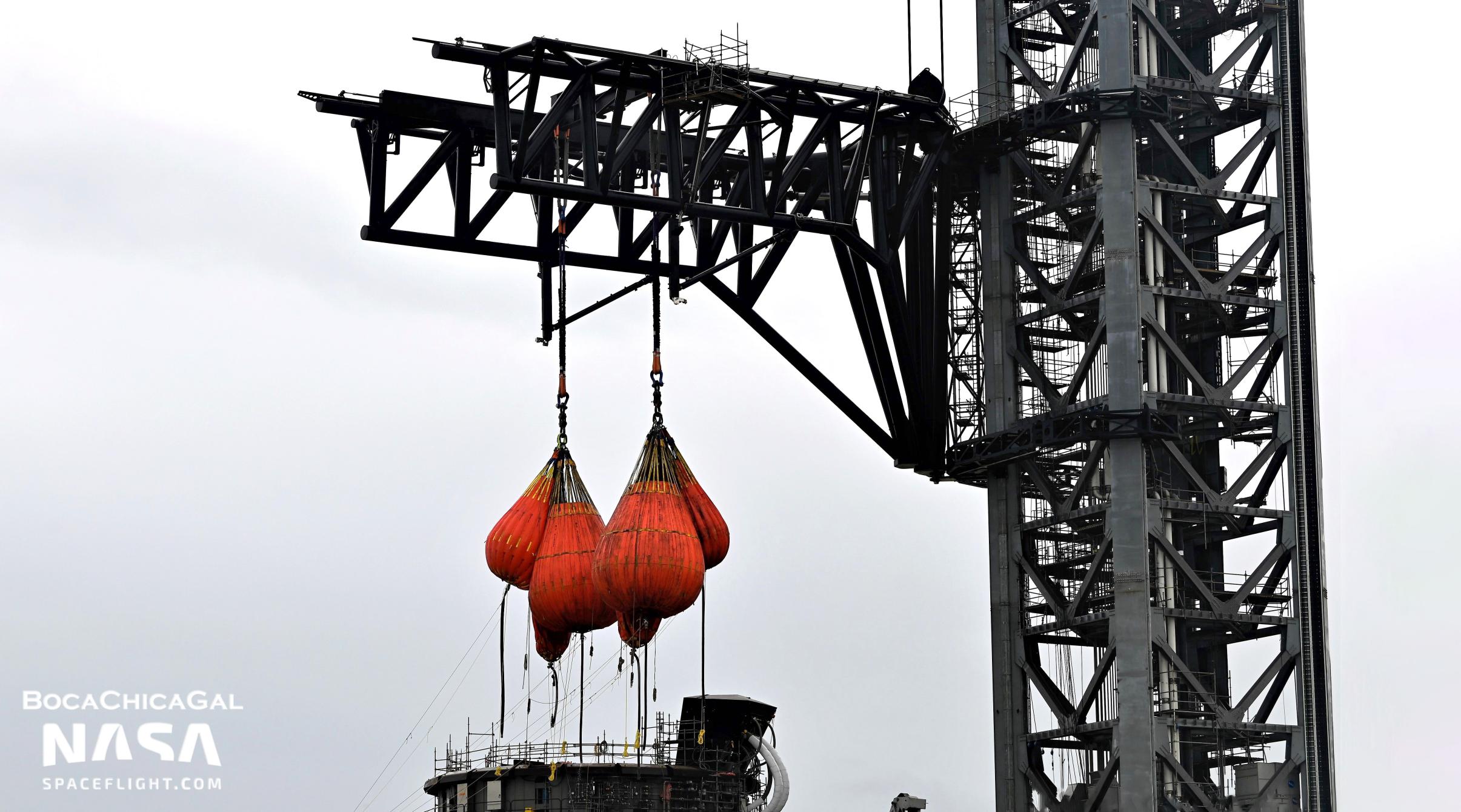 SpaceX has begun testing Starbase’s rocket-catching arms with ballast to simulate the weight of Starship and Super Heavy.

SpaceX started the process of proof testing those arms about a week ago, beginning with some basic calibration work. Together, the three arms and launch tower amount to a giant custom-built robot that SpaceX CEO Elon Musk has deemed “Mechazilla.” Controlled with a complex system of hydraulic and electromechanical actuators spread throughout each structure, SpaceX must calibrate all of those devices to enable the full range of motion the arms are meant to be capable of. To do so, SpaceX appeared to actuate both catch arms (also known as “chopsticks”) as far as they were able to move on January 4th, producing data that could be fed back into the system’s control software to properly set limits of motion.

A handful of days later, arm testing continued, with SpaceX lifting the carriage higher than it had traveled before and demonstrating more complex longitudinal movements that required synchronized motion of both arms. On January 9th, SpaceX performed the most ambitious arm testing yet, nearly lifting the arms to the top of their ~140 meter (~460 ft) tall launch tower backbone to simulate the range of vertical motion required to lift and stack Starship and Super Heavy.

SpaceX also installed a temporary frame meant to simulate a Starship or Super Heavy booster, foreshadowing additional testing planned in the coming days. That jig upped the stakes for the longitudinal actuation portion of January 9th’s testing, as anything less than the precise, synchronized movement of both arms could have caused the heavy steel frame to fall hundreds of feet onto a range of equipment and structures directly below it. Thankfully, the arms performed well and returned to their resting position without issue.

On January 11th, SpaceX proceeded to install six ‘water bags’ – three to a side – on the Starship simulator frame. Amounting to giant, heavy-duty water balloons, those bags are routinely used to stress-test large structures and devices by simulating payloads that might be too expensive or inconvenient to use solely for testing purposes. With those seemingly empty bags attached, SpaceX proceeded to move the catch arms up and down the full length of the launch tower at record speed, taking about seven minutes to climb and descend ~120 meters (~400 ft) – averaging a brisk 0.6 mph or 1 km/h.

Here is a video from Giga Texas of this type of mass simulator! pic.twitter.com/uHfah45WVt

SpaceX did appear to fully fill around four of the six bags and partially filled the other two, causing the whole arm structure to visibly sag during the fill process as the weight of the ballast stretched the several-inch-thick steel cable holding the whole device aloft. In the late afternoon, the laden arms lifted around 10-20 meters and rotated left and right, partially demonstrating the process of rotating a lifted Starship or Super Heavy into position for stacking or launch mount installation. They were never lifted high enough to truly demonstrate that ability, though, and were lowered back to the ground soon after.

As of 10pm CST, January 12th, the water bags appear to have been fully drained after their first excursion. It’s likely that load-testing will continue over the next several days or weeks – SpaceX may just want to avoid leaving the arms fully loaded overnight.