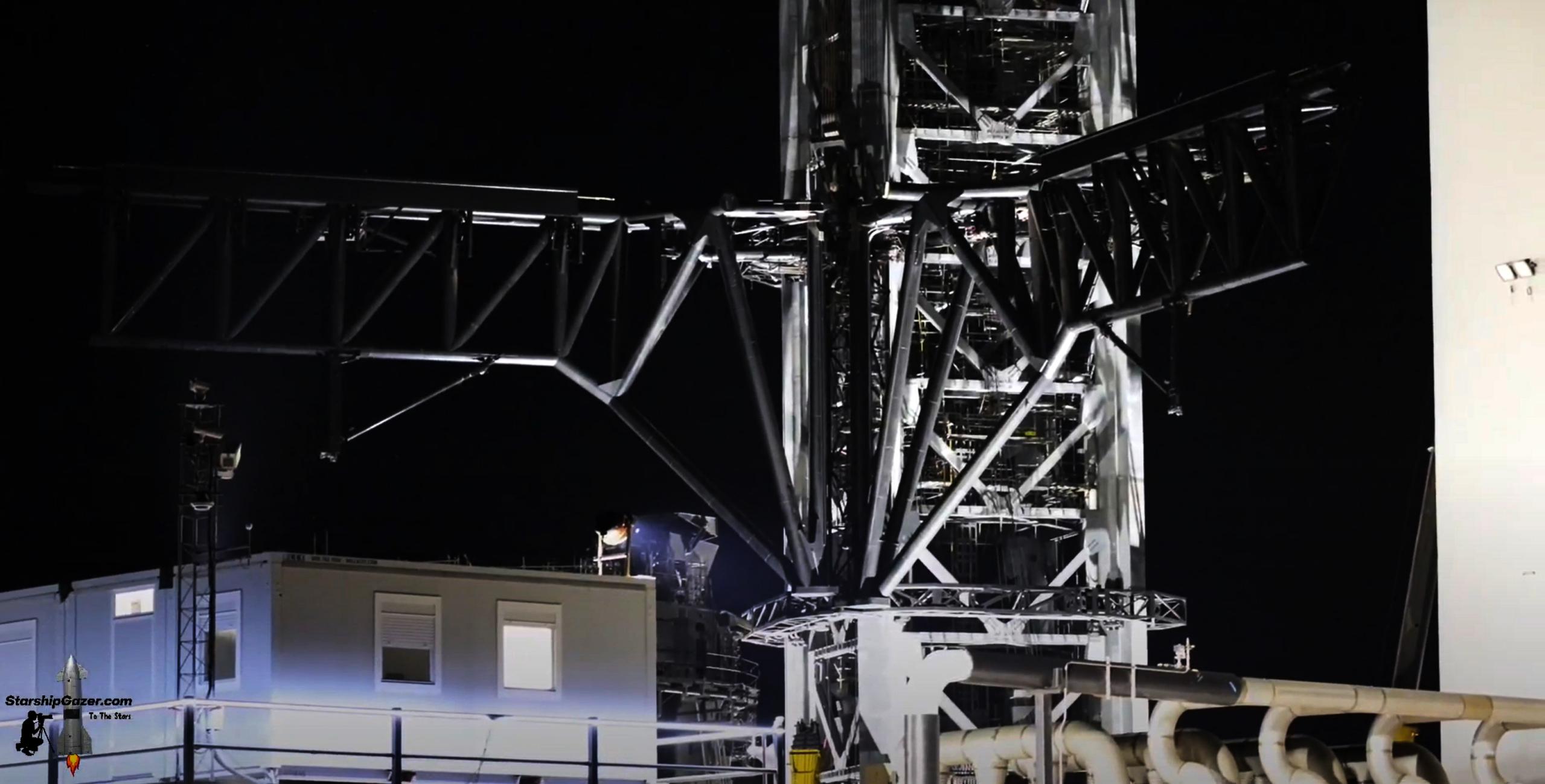 Update: Shortly after publishing, SpaceX began a much more ambitious series of tests with the Starship launch tower’s two main arms, which are designed to lift and (one day) catch Starships and Super Heavy boosters.

After lifting the arm carriage about 15m (~50 ft), several times higher than January 3rd’s far more conservative kickoff, SpaceX fired up each arm’s main hydraulic actuator and opened them about as wide as they’re able to move. Unsurprisingly, the arms’ first powered lateral movement happened very slowly, obviously telegraphing caution but probably also hinting at the start of a calibration process needed to determine their full range of motion and associate those positions with certain sensor readings or telemetry to ensure they can be safely controlled. As of midnight CST, that testing has continued well into the night.

Regardless of the purpose, substantial powered movement is a major milestone for the tower’s main arms and all but guarantees that more extensive tests and simulations are soon to come.

SpaceX has moved Starbase’s rocket-catching “chopstick” arms for the first time since they were installed on the orbital Starship pad’s ‘launch tower’ two months ago.

After a shockingly brisk three-month period of assembly, the first arm installed in late August 2021 was a lone structure designed to swing in; grab and stabilize Super Heavy with its claw; fuel and power Starship; and quickly detach and swing away from the rocket during launch. A month and a half later, SpaceX begin installing a much larger pair of more complex arms in mid-October. Unlike the Starship quick-disconnect (QD) arm, the pair of arms that followed were almost nothing like anything built as part of another rocket launch complex.

Unlike other ‘arms’ related to other rocket launch facilities, the pair SpaceX began to install on Starbase’s launch tower were colossal, measuring more than 30m (100+ ft) long and 5-10m (15-30 ft) tall. Built out of heavy-duty steel pipe and affixed to an even sturdier pair of claw-like supports that grab onto the launch tower, the combined assembly likely weighs hundreds of tons. Aside from their sheer scale, Starbase’s main tower arms are also attached to a complex system of cables and an industrial-strength ‘drawworks’ commonly used on giant oil rigs and derricks.

They also feature huge actuators that allow the two arms to open and close, revealing a bit of their purpose. While the main reason they likely exist is to provide SpaceX with an all-weather alternative to cranes for lifting, manipulating, and precisely stacking Starships and Super Heavy boosters at the launch pad, the headline – ever since Musk revealed the idea – has always been plans to use those same arms to literally catch rockets out of mid-air.

To do so, they’ll need to be able to actuate and move extremely quickly and precisely up and down the Starship launch tower, matching the velocity and autonomously determining the position of landing Super Heavy boosters (and possibly Starships) to avoid major damage or the loss of entire vehicles. While arguably an unnecessary gamble and an attempt to micro-optimize the concept of operations of a rocket that’s yet to attempt a single orbital-class launch, SpaceX’s CEO is clearly committed to the idea and – whether or not the first iteration works – has fully delivered on the first complete lift-and-catch system.

On January 3rd, 2022, after removing a large amount of scaffolding in the days prior, SpaceX briefly and slightly moved the installed arms for the first time, using the drawworks to lift the entire arm-and-carriage assembly a few meters (~6 ft) up and down the tower. Once a few minor additional steps are taken, the chopsticks could be ready for much more extensive testing, beginning with basic lift, descent, and arm actuation tests to calibrate and then proof the first-of-its-kind mechanism. Later, SpaceX will likely simulate catching rockets in a wide range of scenarios. Somewhere before, during, or after that testing, SpaceX may perform another fit test with Starship S20 and Super Heavy B4 – but this time using the arms to lift and install the stages.