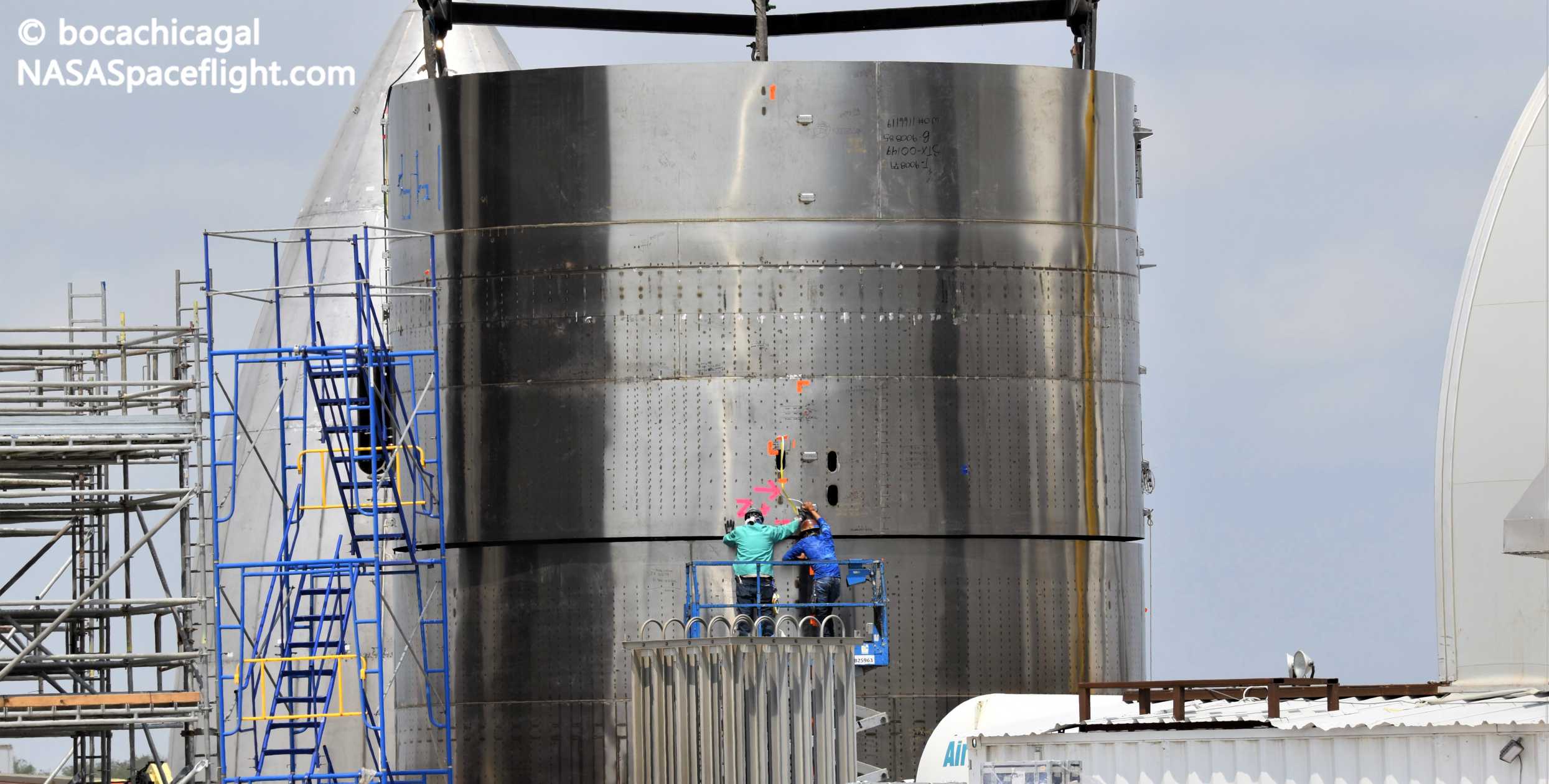 What could become SpaceX's first multi-engine, high-flying Starship rocket is likely just a handful of days from being mostly complete. (NASASpaceflight - bocachicagal)

SpaceX’s first high-flying, triple-engine Starship prototype is rapidly approaching completion at the same time as the company is preparing for the rocket’s predecessor to lift off on its inaugural test flight.

Known as serial number 5 (SN5), it will be the fifth full-scale Starship prototype completed by SpaceX since November 2019 and the fourth since late-January 2020. Following in the footsteps of Mk1, SN1, SN3, and SN4, SpaceX CEO Elon Musk has recently stated that Starship SN5 will be the first prototype to have three Raptor engines and a nosecone installed and could be the first to be outfitted with new and improved aerodynamic control surfaces.

In the meantime, Starship SN4 is perhaps less than 30 hours away from performing a third Raptor static fire test, potentially paving the way for the biggest challenge yet for a full-scale Starship prototype: powered flight. Scheduled no earlier than 9am CDT (14:00 UTC), May 13th, Starship SN4’s next static fire is meant to ensure that a replacement Raptor engine is functioning properly. If successful, the building-sized rocket will effectively be ready to attempt its first launch – also a first for the Starship program overall – pending FAA approval.

As illustrated in the unofficial diagram above, nearly all of the individual sections that will make up Starship SN5 appear to be more or less complete, excluding some ambiguity added by the interchangeable nature of some of the steel rings all Starships are built out of. For the current design and assembly strategy, Starships are comprised of eight separate sections, themselves made up of stacks of 2-4 steel rings. Altogether, excluding the conical nose section, a single Starship requires approximately 20 of those ~1.8m (6 ft) tall steel rings to reach its full height.

Currently, SpaceX has been focused on testing just the tank section of Starship prototypes, representing the vast majority of the technical challenges that must be solved to fully realize the next-generation launch vehicle’s ambitions. Excluding a smaller secondary liquid oxygen tank situated in the tip of Starship nosecones, the nose section is effectively irrelevant – putting the cart before the horse – until Starship tank sections are more of a known quantity.

When that would be the case was entirely up in the air until just the last week or so, when Starship SN4 became the first full-scale prototype to pass a cryogenic proof test, perform a wet dress rehearsal (WDR) with real propellant, complete static fire(s) with a Raptor engine installed, and – finally – pass a more challenging cryogenic pressure test in quick succession. With those milestones passed for the first time ever, SpaceX has effectively proven that it’s solved the what is arguably the most unprecedented aspect of its Starship program: building orbital-class pressure vessels for pennies on the dollar on the South Texas coast.

Of course, doing it once with Starship SN4 is not the same as fully confirming that SpaceX’s extremely exotic South Texas rocket factory is capable of producing repeatable results with future rockets. While incredibly improbable, Starship SN4’s multiple successes could be a fluke. Additionally, as Musk has noted, the goal is to complete two entire Starships every week once the factory is fully optimized. SpaceX has already achieved a monthly production rate for its current line of prototypes, an extremely encouraging sign for the practicality of Musk’s stretch goal.

In the prototype stage, that speed of production has been incredibly useful, enabling SpaceX to move at a pace of launch vehicle development almost unheard of since NASA’s Apollo Program. At the moment, Starship SN4 has passed all tests thrown at it so far and will soon be attempting the riskiest Starship test yet with its inaugural hop attempt. If the ship were to be destroyed, one would traditionally expect a bare minimum of a few months of program delay. Instead, Starship SN5 could be more or less complete even before SN4 receives FAA permission for its first flight, meaning that a replacement will already be ready to roll to the launch pad if or when SN4 is destroyed.

In a best-case scenario, if Starship SN4 continues to pass the tests thrown at it, including one or several hops, SpaceX will instead be entering a new phase indicative of what’s to come: the concurrent testing and operation of a fleet of Starships. A step further, if Starship SN4 succeeds, Starship SN5 appears to be on track to become the first prototype to have a full three Raptor engines and a nosecone installed, as well as the first to attempt a high-altitude (20 km/12 mi) flight test.