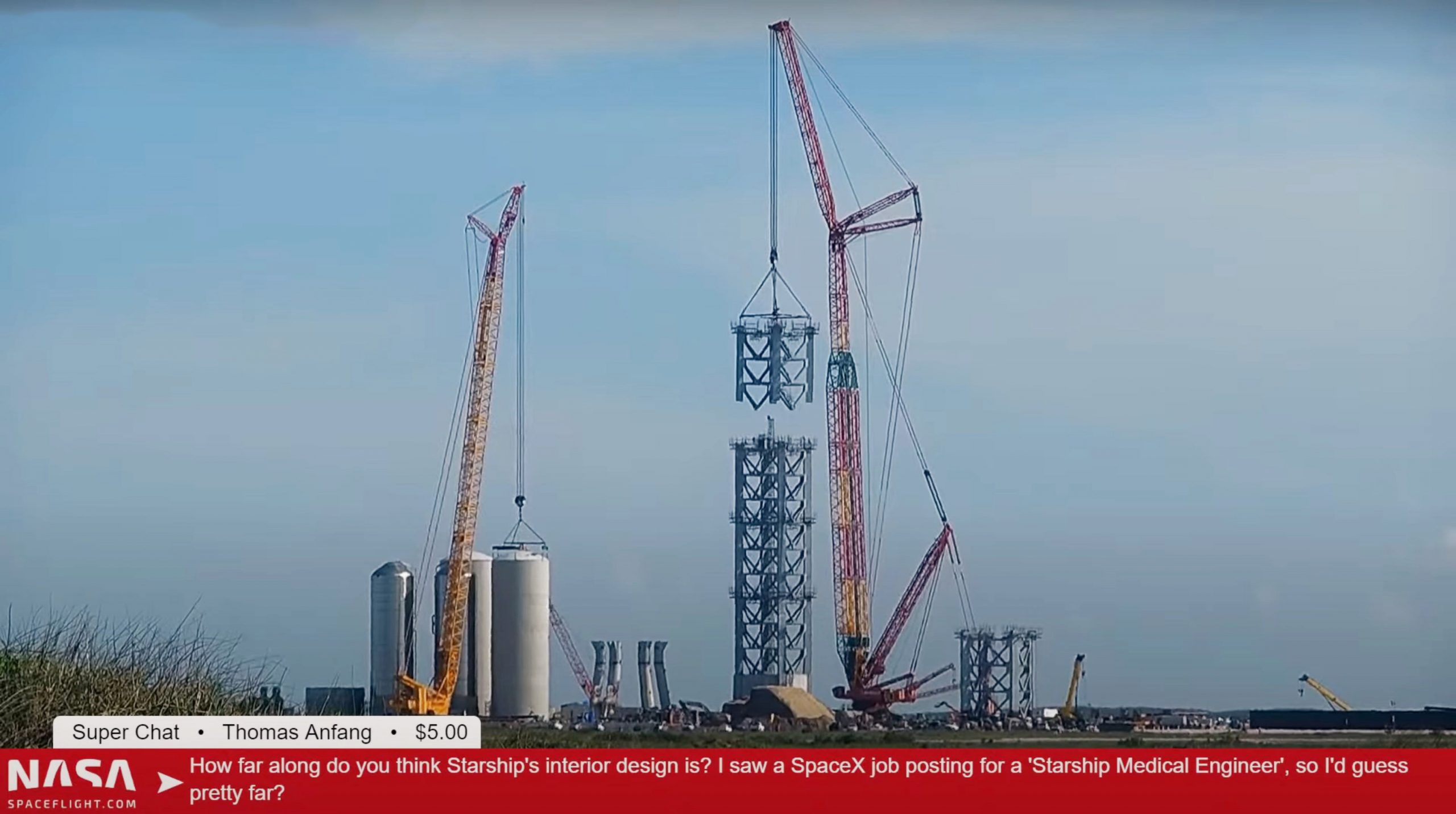 SpaceX’s Starship ‘launch tower’ appears to have been outfitted with the first major component of a mechanism that’s meant to allow the structure to catch Starship boosters – and maybe the ships themselves – in mid-air.

Already speeding towards completion just a few months after assembly began, the tower’s primary purpose is to provide a stable platform capable of steadying Starships and Super Heavy boosters during final integration, when the two stages combine to become one launch vehicle. Situated a stone’s throw from the Gulf of Mexico on the windy South Texas coast, the process of carefully mating two halves of what amounts to a several hundred ton skyscraper will be far harder than it might seem.

Though early operations could likely trade refinement for patience and some level of added risk, regular Starship operations will necessitate rapid, reliable, and repeatable mating in almost all weather and wind conditions. In other words, Starship’s integration tower will likely be outfitted with arm-like structures capable of temporarily fixing Starships and Super Heavy boosters in place. Teased several times by CEO Elon Musk over the last six or so months, SpaceX or its stubborn leader seem to have decided somewhere along the way that the same tower could potentially catch those building-sized rocket stages, too.

Recently described as “basically Mechazilla” by Musk, the launch tower’s supposed catching mechanism is almost a complete mystery. Based on the CEO’s comments, the implication is that some kind of giant, mobile pair of robotic arms will be affixed to the tower’s exterior. When catching Super Heavy boosters, Musk says those arms will ‘grab’ the rocket just below its Falcon booster-style grid fins. In fact, a prototype of a Super Heavy booster’s grid fin section was recently completed at SpaceX’s Boca Chica factory and sports what looks like two anchor-like structures that could be used to secure and grapple the rocket.

A bit like the four anchors used to secure Falcon boosters to the launch pad before liftoff and withstand hundreds of tons of thrust, the structures installed between Super Heavy grid fin mounts appear similar but are instead installed near the top of the rocket. Perfect, in other words, to serve as anchor points for cranes or clamps. It’s possible that Super Heavy boosters could also ‘land’ by resting the flat rear end of those hardpoints on the tower’s arms.

At the same time, catching boosters with the flat end of those hardpoints with give Super Heavy an extraordinarily narrow window for successful recovery unless its grid fins are also capable of serving as the passive part of the catch mechanism.

Known as a drawworks and potentially scavenged from Phobos, an oil rig turned SpaceX sea launch platform, the powerful hoist may be the first part of the mechanism that could allow the tower’s arms to roll up and down its exterior, ‘cushion’ landing boosters, and function a bit like a crane. Using rail-like structures visible on three of the tower’s four ‘legs,’ the hoist could lift that mechanism like a sort of complex rocket elevator.

Ultimately, though, SpaceX’s unprecedented Starship launch/catch tower will remain a mystery until it’s fully assembled and in active use. Thankfully, based on the rate of progress being made over the last few months, those milestones might be just a few months away.