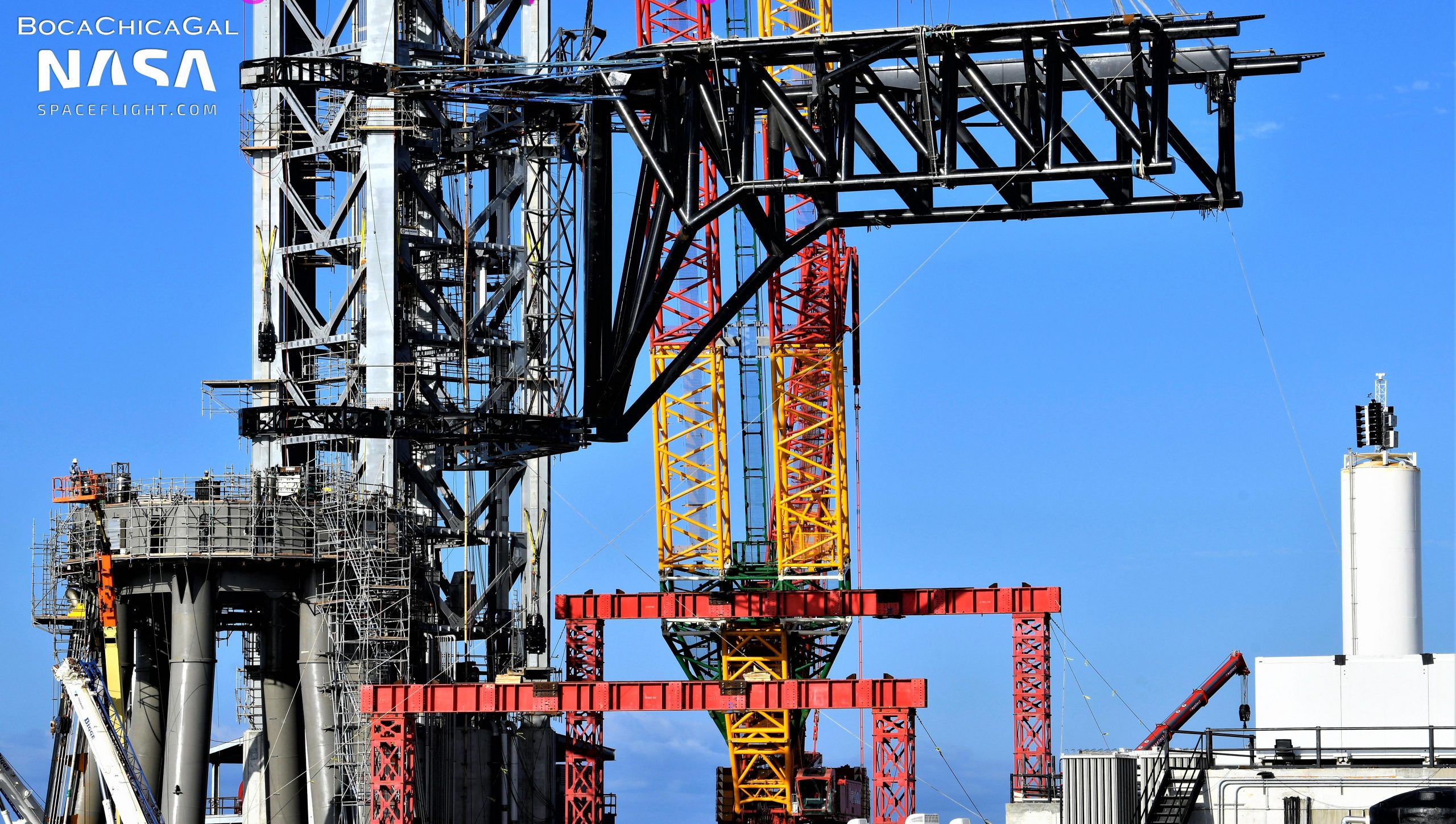 Mechazilla is almost fully assembled. Note the humans at the bottom right for a sense of scale. (NASASpaceflight - bocachicagal)

Once complete, SpaceX will have created a first-of-its-kind launch tower designed to stack and manipulate Starships and Super Heavy boosters in far worse conditions than cranes can tolerate and catch both rocket stages out of mid-air. Referred to internally as ‘chopsticks,’ the giant pair of steel arms will join a third ‘quick disconnect’ (QD) arm tasked with stabilizing Super Heavy during Starship installation and feeding the reusable upper stage power, comms links, and some 1200 tons (~2.65M lb) of propellant.

Together, they will enable SpaceX to attempt Starship’s first orbital test flights and, perhaps one day, help the next-generation rocket launch in almost any weather and achieve unprecedentedly rapid reusability. But first, SpaceX needs to finish installing and rigging the massive structure.

Beginning on August 29th after less than three months of assembly, SpaceX installed Starship’s QD arm on the launch tower. About a month later, the QD arm was mostly finished off with the installation of a claw-like grabber meant to stabilize Super Heavy and is now only missing its namesake quick-disconnect (an actuating device that will connect Starship to the pad and rapidly disconnect at liftoff). Assembly of the last three major components of Mechazilla – a carriage-like structure and two giant arms – began in July and, much like the tower’s QD arm, wrapped up about three months later.

On October 6th, SpaceX began combining those three main parts by flipping the carriage – a bit like a spine and ribcage with ‘skates’ that attach to rails on the launch tower’s legs – vertical and staging it on a temporary support structure. Both ‘chopsticks’ were then flipped into the correct orientation and moved into position with separate cranes for installation on the carriage/backbone. From start to finish, that process took around 9-10 days and culminated with the installation of two giant cylindrical pins with built-in bearings on October 14th and 15th. By the 17th, both cranes had detached from the assembled Mechazilla arms and carriage were, leaving it precisely balanced against the support structure and more or less freestanding.

Just a few days later, after a last-second attempt on October 19th was called off as night fell, SpaceX tried again on the 20th and completed the first step of installing Mechazilla’s catch arms on the launch tower without apparent issue. Likely weighing several hundred tons, Starbase’s largest crane lifted the massive structure up and over an adjacent launch mount and then carefully inched it closer to the tower. Prior to the lift, SpaceX technicians staged 12 ‘skates’ on three of the tower’s four legs – two upper and two lower skates per leg.

Here's one with the QD arm back. If QD engaged, chopsticks can't get past. Elon said only need for "ship mate". Chopstick sequence:
1. Lift SH onto OLM
2. Rise, swing to side, lower, grasp SS
3. Rise above SH
4. Deploy QD arm and claw
5. Lower SS onto SH
6. At launch, open wide! pic.twitter.com/iRRfXQ5uEn

Once the carriage was in the right position, workers were able to wrap its upper arms around the tower and began connecting the carriage to those skates with several more large pins. It’s unclear how much progress was made in the hours after the lift but it appears that the carriage has been attached to maybe four or five of six upper skates. Work continued well after nightfall, meaning that it will likely only take a few days to complete all 12 connections. However, even after all skates are installed, the carriage, arms, and skates will still be hanging by crane or winch.

To truly install the structure on the tower, SpaceX will have to finish installing and rigging thousands of feet of steel cable that – via a complex system of pulleys – will connect to powered ‘drawworks’ that will support the carriage and catch arms and lift the assembly up and down the tower like an elevator car. The catch arms and carriage will also need to be mated with a giant ‘cable carrier’ (already staged on the tower) that will connect the structure to ground and control systems.