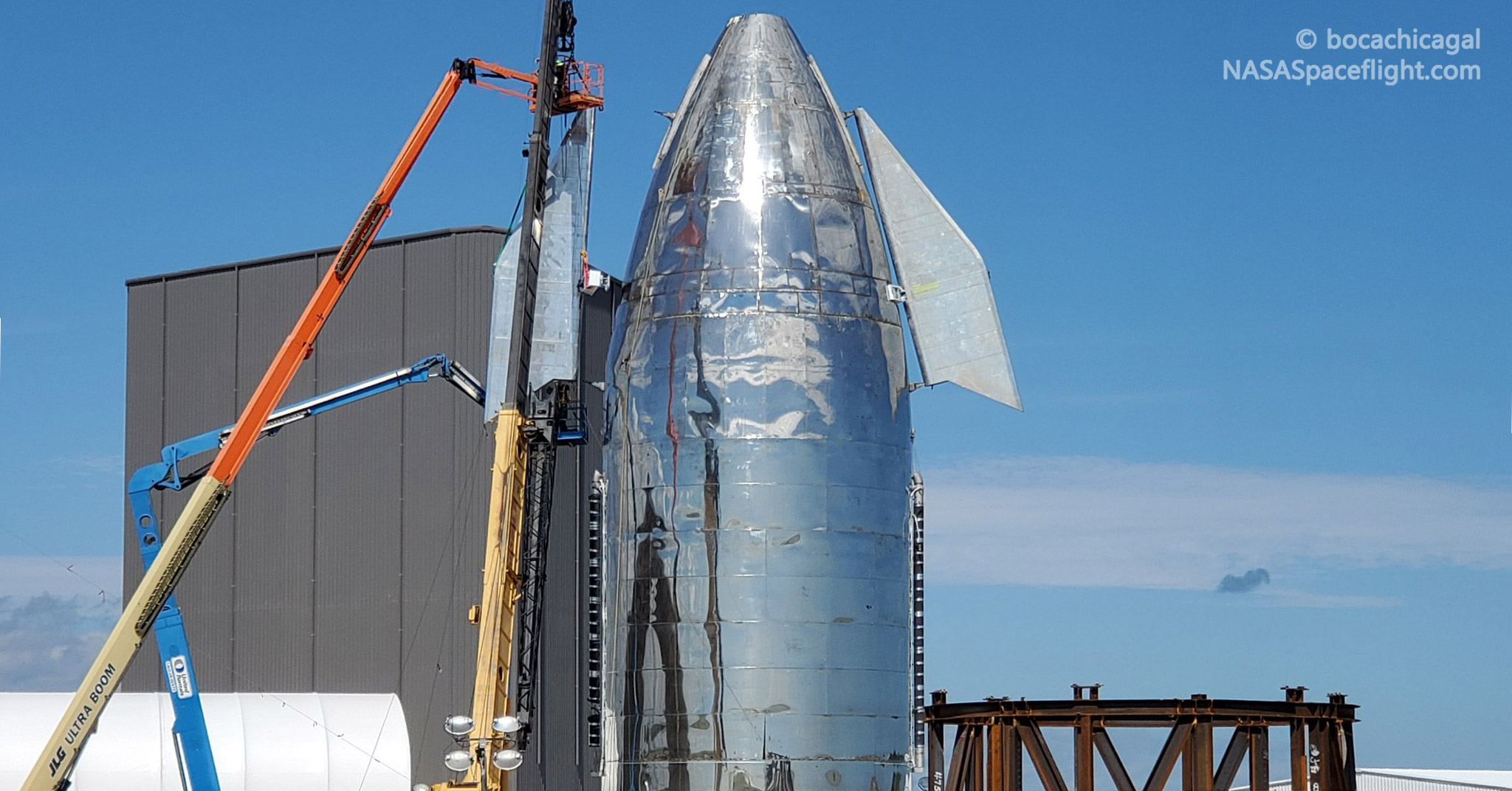 SpaceX has begun to install Starship Mk1’s second of two forward ‘canards’, aerodynamic flaps the rocket prototype will soon use to attempt the first radical skydiver-style landing. SpaceX technicians are likely working to fully outfit the rocket before transporting its nose section to the launch pad, where it can be mated to Starship Mk1’s lower tank and engine section.

This second canard installation follows just a few days after SpaceX technicians began installing the first fin, a process that took a fair bit longer than usual as a result of new hardware integrated with the control surfaces this time around. Discussed earlier today, those large mechanism are likely the substantial actuators Starship will need to rapidly tweak its trajectory while falling through the atmosphere.

“Barely three weeks after the rocket’s forward flaps (canards) were removed, SpaceX technicians began the reinstallation process with one major visible difference: a massive motorcycle-sized actuator. The appearance of that previously unseen actuator mechanism on the first reinstalled canard suggests that this time around, SpaceX is installing Starship’s flaps with their final purpose of controlling Starship’s free-fall in mind.”

With the first installation complete, SpaceX’s Boca Chica technicians will likely be able to install Starship Mk1’s second canard more quickly. Beyond attaching the prototype’s control surfaces, SpaceX has also made a significant amount of progress outfitting Starship Mk1’s nose section with other hardware, notably fitting the nose’s exterior fuel lines with what is likely insulation.

That same black and silver insulation has been visible on SpaceX’s Starship Mk2 prototype in Cocoa, Florida, where technicians appear to have taken a slightly different step than Texas, insulating the plumbing before installing it on the vehicle.

Together again, at last

On October 30th, SpaceX lifted Starship Mk1’s tank and engine section onto a remote-controlled transported and moved the rocket half approximately a mile to its Boca Chica, Texas launch facilities, where Starship was installed on a freshly-constructed launch mount. SpaceX’s decision to move Mk1’s halves separately came as a bit of a surprise but appears to have been driven by a need to ensure that the spacecraft’s bottom half fit properly on the launch mount’s umbilical connections. Between the mount’s hefty steel beams, the beginnings of those panels (often deemed ‘quick disconnects’) are visible at the base of the panorama below.

Also visible around the base of Starship Mk1’s shiny aft section are a number of black steel structures – six, to be precise. Those protrusions are Starship’s landing legs, one of the last significant mechanisms installed on the rocket before SpaceX transported the half to the launch site. For unknown reasons, Starship Mk1’s legs – as well as Mk2’s – are almost nothing like those SpaceX have proposed for past Starship iterations and are even more dissimilar to Falcon 9’s extensively flight-proven hardware.

Instead of Falcon 9’s triangular, spread-eagle legs or BFR’s older tripod fin setup, Starship 2019 features six peg-like legs that only deploy or retract directly up or down. As some observers have noted, some of the hardware installed in and around those steel beam-like legs resembles industrial-grade linear brakes, suggesting that the legs will be deployed from their stowed positions by releasing those brakes and letting gravity do most of the work.

Layman concerns remain about the stability of six perfectly vertical legs with a span essentially the same as Starship’s own diameter, a possible indicator that the dead-simple landing legs on Mk1 and Mk2 may be dramatically simplified for the sake of speedy development. At the same time, it’s possible that their linear brake mechanisms could simultaneously offer some sort of minor suspension or terrain compensation, but their extremely narrow span fundamentally limits their potential stability. For landing on a prepared concrete slab, however, they will likely be sufficient, although almost any lateral velocity at all could result in Starship tipping over.

For now, SpaceX has road closures scheduled on November 7th, 8th, and 12th, the former two of which are probably more focused on transporting Starship Mk1’s nose section to the pad for installation atop the tank section. At the same time, SpaceX is clearly preparing for a series of major Starship tests, including a tank proof test, a wet dress rehearsal, and a triple-Raptor static fire. Stay tuned for updates!