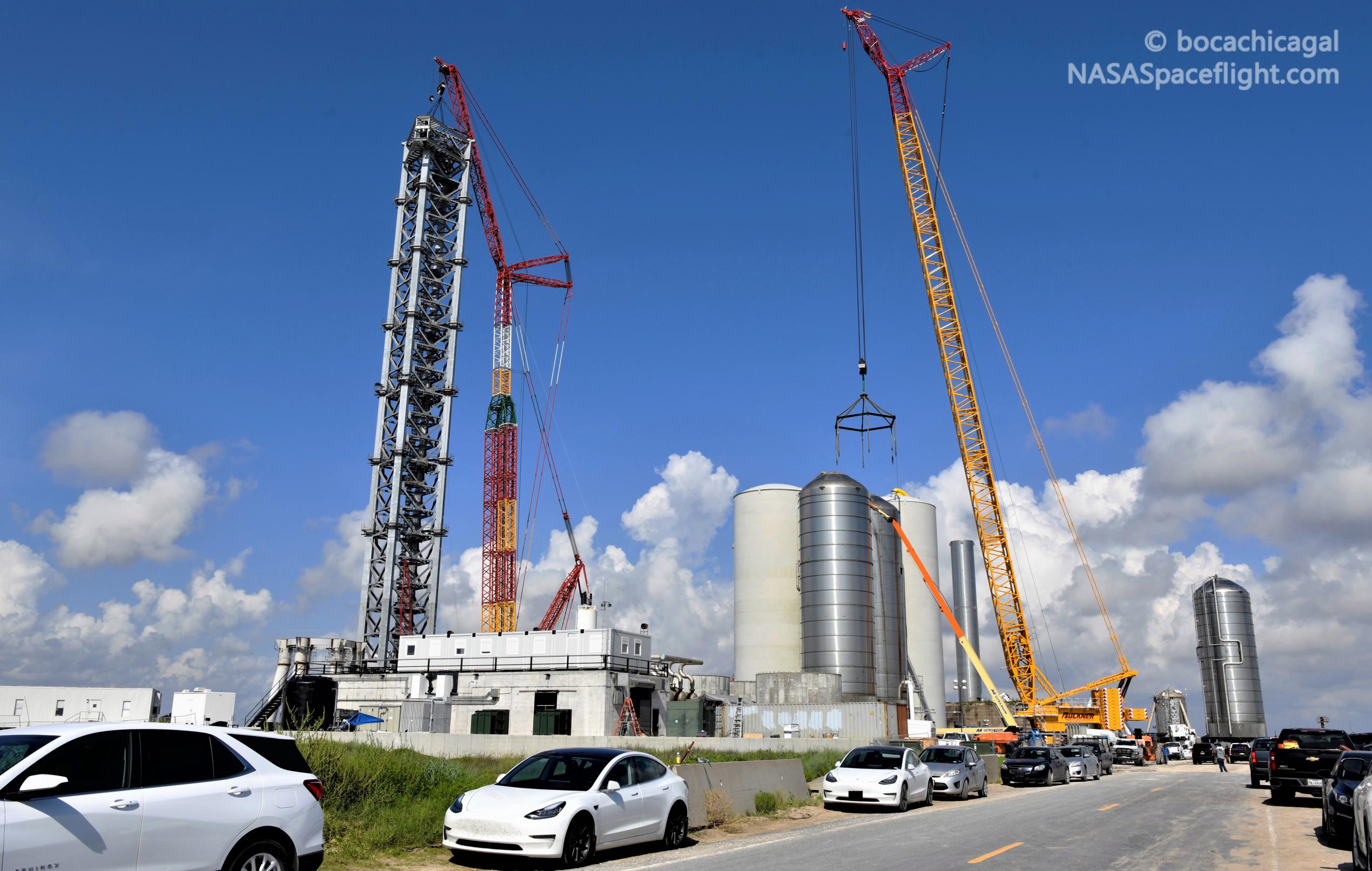 Highlighted by a Wednesday jam-packed with important milestones, SpaceX appears to be shifting its focus in South Texas to the completion of Starship’s first orbital launch pad.

Boca Chica will be the first time in its history that SpaceX has faced the challenge of (or had the opportunity to) build an orbital launch complex from scratch after gaining a great deal of expertise modifying, reactivating, and rebuilding two existing pads in Florida and one in California. SpaceX’s Boca Chica facilities must also support what will be the most powerful rocket ever built (or tested) and a planned flight rate and turnaround capability that drastically exceeds anything the company (or anyone else, really) has attempted.

As a result, the site looks almost nothing like SpaceX’s other launch facilities. On top of the already significant hurdles faced, SpaceX is also attempting to complete its from-scratch facility in record time and work on Starship’s orbital launch site (OLS) really only began in earnest around the start of 2021. That aggressive work schedule has begun to clearly bear fruit in the last few months and arguably reached a bit of a local peak on Wednesday, July 28th.

A Tower Is Born

Kicking off the day after an aborted attempt on Tuesday, SpaceX began what would turn out to be an extremely busy Wednesday around 5am CDT (UTC-5) with the installation of the Starship launch tower’s ninth and final prefabricated section, effectively completing the structure’s skeleton. Unlike all other SpaceX pads, save for Pad 39A’s single-purpose Dragon and Crew Access Arm, Starship’s first orbital launch pad will lean heavily on a massive steel tower.

By all appearances, Starship’s launch tower will host an elevator-like carriage outfitted with several large arms on its exterior and will use those arms to stabilize, stack, fuel, and maybe even catch Starships and Super Heavy boosters. The tower will be integral to routine Starship launch operations, in other words.

With the installation of one last steel segment, that tower grew to a height of ~145m (~440 ft) and isn’t expected to get any taller after a 10m/30ft lightning rod is eventually added. SpaceX’s pad team can now begin the process of finalizing tower construction, ranging from adding cladding on its rectangular exterior and welding all nine steel sections together to filling its four legs with concrete.

Just a few hours after the start of Tower Section #9 installation, a fleet of SpaceX’s self-propelled modular transporters (SPMTs) left the build site with two major pieces of orbital pad hardware in tow. For the first time in three months, one of those payloads was an OLS propellant storage tank built by SpaceX itself out of parts almost identical to those found on Starship. Since the first two ground support equipment (GSE) tanks were rapidly installed in April, activity on that front has been curiously stagnant.

Since modifications of those tanks began in-situ over the last month or so, the general consensus has been that a fairly minor design flaw or oversight was discovered well after production began, requiring a significant pause to rework and redesign the crucial pad components. In the meantime, work on contractor-built GSE tank shells meant to eventually insulate SpaceX’s thin cryogenic storage tanks continued unabated and one water tank and six shells have already been more or less completed. With any luck, GSE tank #5’s delivery to the OLS means that SpaceX has removed the roadblock(s) and is ready to move into plumbing and tank farm activation.

Simultaneously, a far more significant part known as the Starship ‘launch table’ also left SpaceX’s Boca Chica build site after nearly six months of around-the-clock assembly and outfitting. Designed to secure, fuel, and launch orbital Starships, the launch table has to be able to withstand the ~5000 metric ton (~11 million lb) weight of a fully-fueled Starship, hold Super Heavy in place during static fires and prelaunch ignitions that could produce ~7500 metric tons of thrust, and survive the unspeakable fury of 33 Raptor engines operating simultaneously.

Unlike all other major orbital Starship launch pad parts, the custom launch mount and table’s successful and near-total completion is an absolute necessity for any kind of orbital test flight or full-up Super Heavy static fire. Only part of the tank farm is truly necessary and the vast majority of the tower’s intended tasks can be completed with workarounds if neither are fully ready. Without the launch mount, however, testing much beyond what SpaceX has already accomplished is mostly impossible in the near term.

Finally, while less pressing, SpaceX also accepted delivery of four Raptor engines on top of three more that were delivered to Boca Chica on Tuesday. According to CEO Elon Musk, Starship’s first orbital test flight(s) will happen with a full complement of engines installed, meaning that SpaceX will need to build, qualify, and ship at least 35 new Raptors for a single flight.

SpaceX recently completed assembly of the 100th full-scale Raptor engine at its Hawthorne factory and HQ – an encouraging sign that the engines needed for Starship’s orbital launch debut will be ready for flight sooner than later.