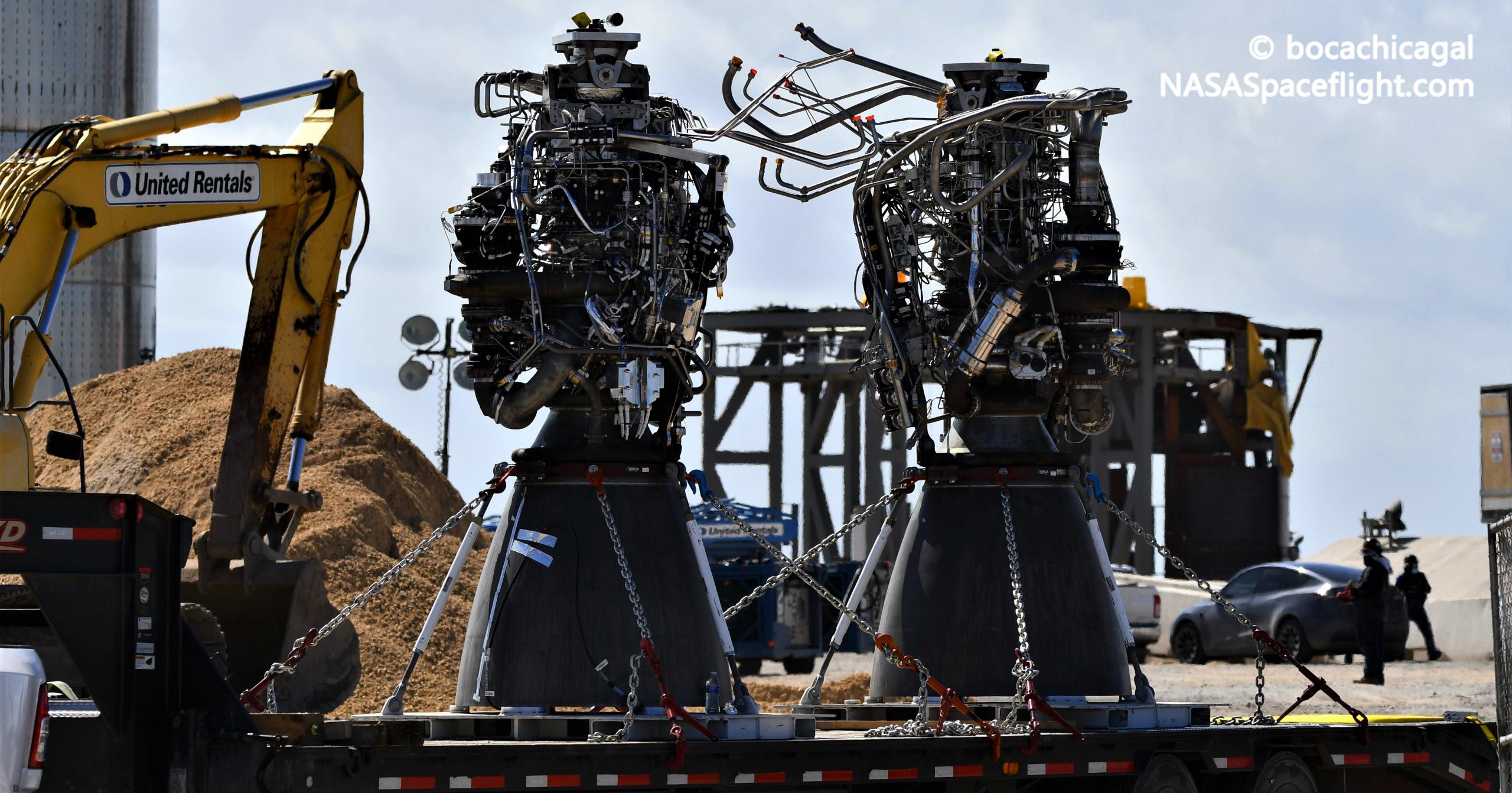 SpaceX has decided to swap one of Starship SN8's three engines (right) for a different Raptor (left).(NASASpaceflight - bocachicagal)

On the same day SpaceX stacked a flightworthy Starship prototype to its full height for the first time, the company decided to swap one of the rocket’s three Raptor engines ahead of one last major pre-flight test.

Curiously, at the same time as SpaceX engineers and technicians were removing Raptor serial number 39 (SN39) from Starship SN8, a second Raptor – SN36 – was briefly removed from a specialized transport truck. Once SN39 was removed, both it and SN36 were loaded onto a separate flatbed and carefully driven back to SpaceX’s Boca Chica Starship factory.

It’s unclear why SpaceX seemingly aborted October 22nd’s in situ Raptor replacement but Raptor SN36 (presumed) was ultimately installed in SN39’s place on Starship around midnight on October 23rd. Regardless of why, SpaceX did what it always does and reacted almost immediately, quickly replacing a Raptor engine to keep Starship SN8 on schedule for what could be its last test before an ambitious 15 km (50,000 ft) launch debut.

According to SpaceX CEO Elon Musk, Starship SN8 is expected to complete two separate triple-Raptor static fire tests before the company is ready to commit the rocket to such an ambitious flight test. SN8 completed what was the Starship and Raptor programs’ first multi-engine static fire test ever a mere two days before SpaceX began installing the rocket’s nosecone – a milestone curiously absent from Musk’s tweet.

It’s possible that Musk was speaking under the assumption that SN8 would be fully assembled before it began static fire operations, with “checkouts” referring to touch-free inspections between two back-to-back Raptor tests to simulate the in-flight reignition Starship SN8 will need to perform during its flight debut. If that’s the case, SN8 may need to pass two more static fires before being cleared for flight.

Either way, SpaceX has already scheduled unlabeled Boca Chica road closures from 8am to 11pm CDT (UTC-5) on October 28th and 29th and 5am to 11am CDT on October 30th. Given the length of those closures, their purpose is almost certainly to support Starship SN8’s next static fire test campaign. With SN8’s nose now fully installed, SpaceX will likely focus on testing the liquid oxygen header tank located in the tip to ensure that the smaller sub-tanks meant to hold Starship’s landing propellant are working as expected and capable of supplying three thirsty Raptor engines.