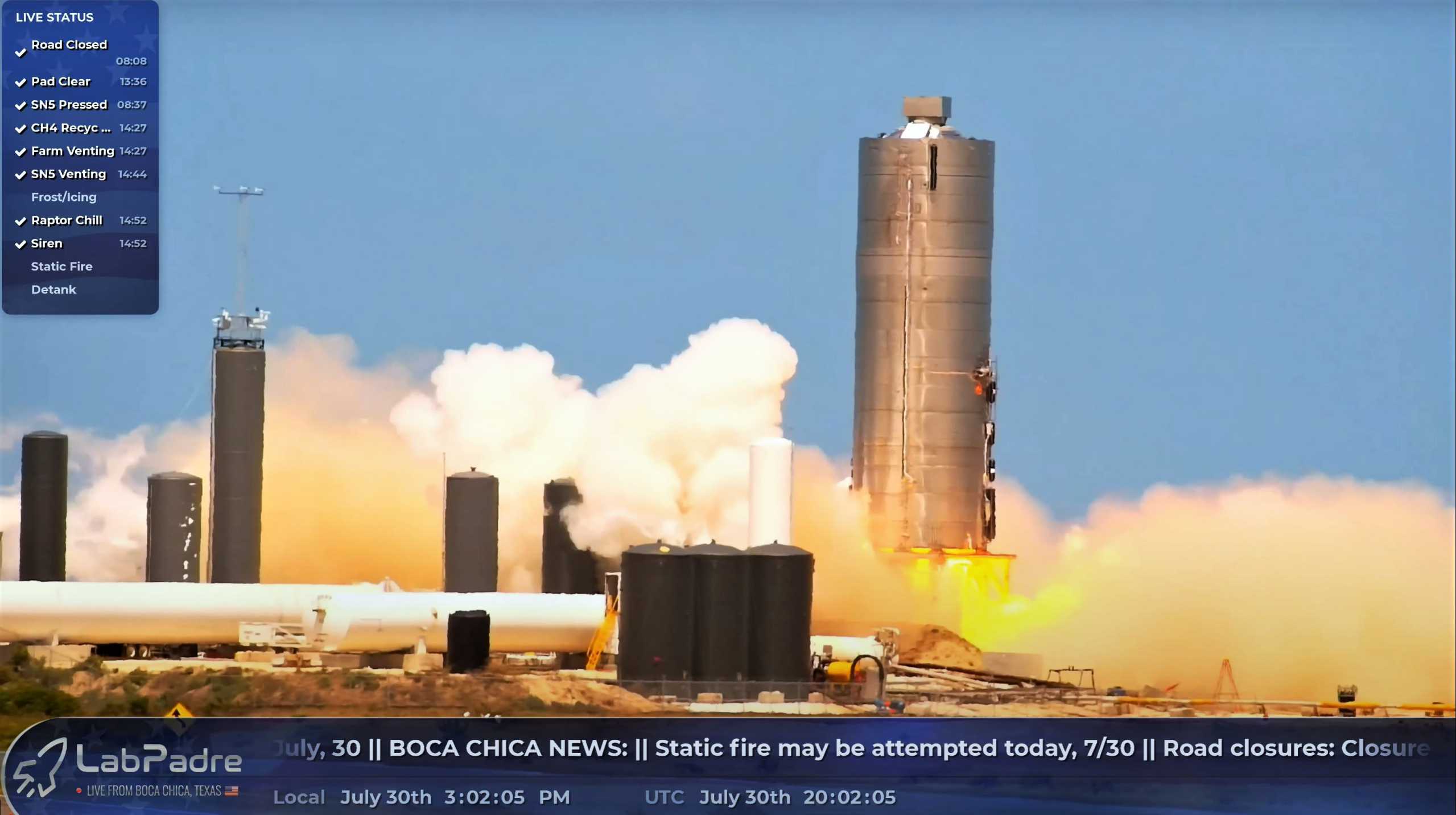 After weeks of unfortunate delays, Starship SN5 has finally completed a Raptor engine static fire, setting it up for a hop debut just a few days from now. (LabPadre)

At long last, SpaceX’s fifth Starship prototype has successfully ignited its lone Raptor engine in a test known as a static fire, paving the way for the first flight of a full-scale Starship as early as this weekend.

After almost three weeks of delays and several aborted attempts, SpaceX managed to fix a variety of relatively minor hardware bugs described by CEO Elon Musk on July 28th. The first static fire attempt was originally scheduled as early as July 10th and wound up gradually slipping a few days at a time to July 25th. Thus began another series of delays after static fire attempts – with varying progress from each – were aborted on July 25th, 27th (x2), and the morning of the 30th.

Thankfully, though those aborts and scrubs and delays have finally come to an end – at least for the moment. If things go according to plan over the next several days and teams are able to rectify a critical issue discovered earlier this week, Starship SN5 could become the first full-scale of its kind to lift off (intentionally) just a few days from now.

Prior to Starship SN5’s successful July 30th static fire, Musk revealed in a tweet that the rocket’s second attempt was aborted on July 27th after Hurricane Hanna damaged a connector, presumably related to telemetry and control. SpaceX fixed the issue and managed to stretch its test window by a few hours, allowing for a second attempt later that night.

Unfortunately, Starship’s static fire was scrubbed again by what Musk later described as a crucial fuel valve that failed to open, as well as “some odd [behavior]” observed in a pump related to the Raptor engine’s steering hardware. To complete the static fire as SpaceX later would two days later, the finicky “fuel spin pump” would have to have been fully fixed, but Raptor’s thrust vector control (TVC) pump issues could have plausibly been put off.

Given that SpaceX spent approximately 2.5 days inspecting and repairing Starship after the third static fire abort, it’s likely that they had time to fix whatever bugs were plaguing Raptor’s TVC hydraulic system. Regardless, Raptor’s TVC will need to be operating flawlessly before SpaceX goes ahead with the first full-scale Starship flight test. The 150m (~500 ft) hop will be the first time a Starship prototype roughly the same size – and built out of the same materials – as an orbital-class ship will attempt controlled flight.

Prior to July 30th’s static fire, SpaceX had already filed a few temporary flight restrictions (TFRs) – used to warn aviators of keep-out zones – with the FAA for hop test attempts on August 2nd and 3rd. SpaceX will likely need 12-24 hours to analyze the data, inspect Starship, and determine a timeline for the first hop attempt, but there is at least a slight chance that the company will push for Starship SN5 to fly as early as this Sunday. Stay tuned as things play out and the hop test gets a more concrete date.