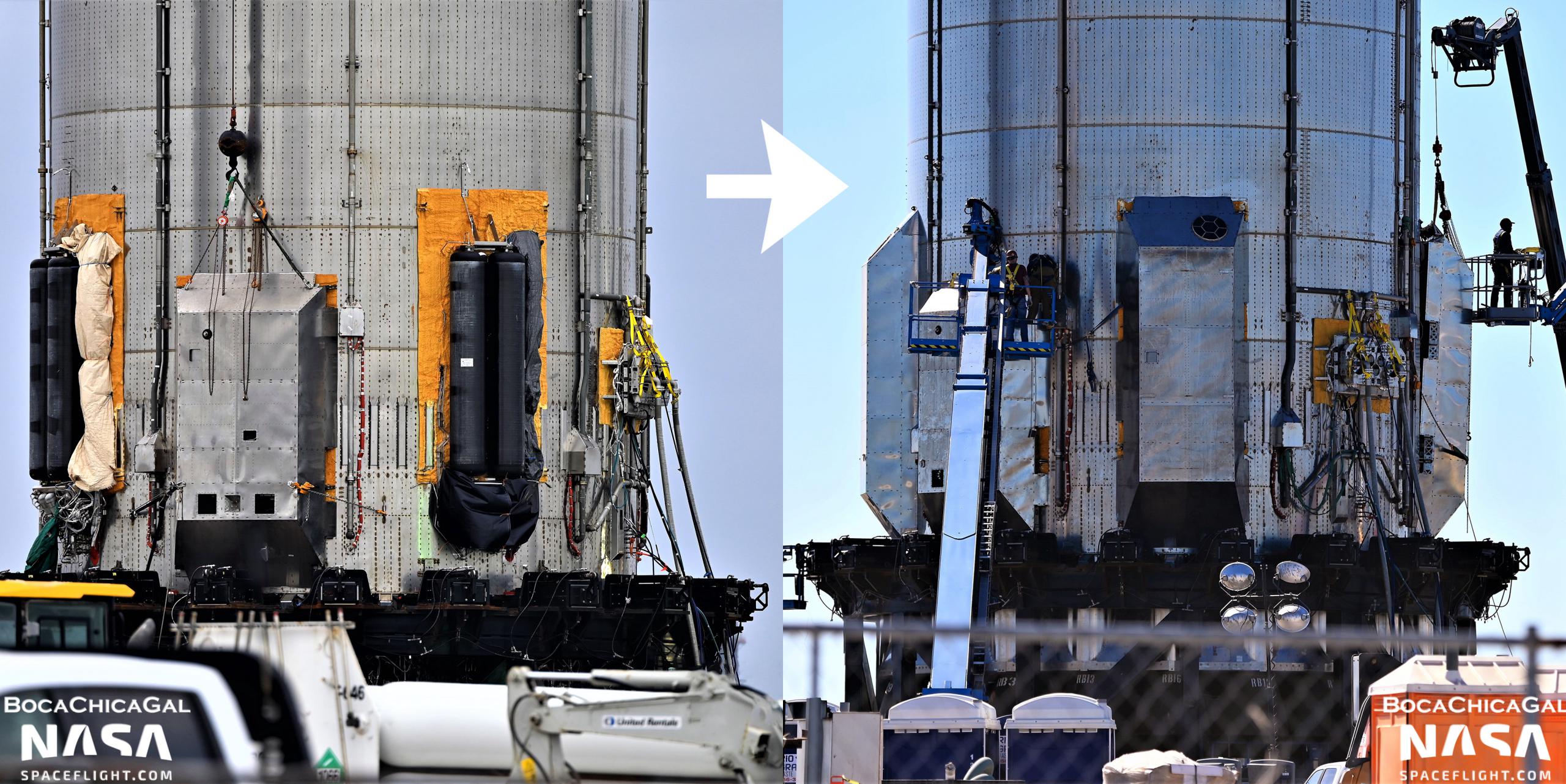 For the first time, SpaceX has more or less installed a full set of ‘aerocovers’ on a Super Heavy booster prototype.

Designed to protect the booster from both itself and Earth’s atmosphere during ground testing, liftoff, ascent, and reentry, Super Heavy’s the structures amount to thin, steel shells mounted on metal box frames. The most obvious aerocovers slot over the top of six racks of equipment installed on the outside of Super Heavy’s aft end, giving the booster a sort of utility belt of hydraulic systems, pressure vessels, avionics, and heat exchangers. Unsurprisingly, those racks are festooned with electronics, composites, and thousands of feet of wiring and thin plumbing – none of which are particularly suited to sit a few dozen feet from the fury of 29-33 Raptor engines or near the leading edge of a hypersonic reentry vehicle.

Aside from the steel they’re mounted on, it’s likely that every system located on Super Heavy’s ‘utility built’ would begin malfunctioning or be destroyed outright if directly exposed to just a few seconds of the hypersonic buffeting and heating Starship boosters will experience during reentry. Unlike Falcon boosters, which almost always use reentry burns to slow down and create a sort of heat shield with their own exhaust, SpaceX is theoretically designing Super Heavy to survive the full force of reentry without an extra burn to cushion the blow.

To survive reentry and still land in good enough condition to enable anything close to same-day reusability, which is SpaceX’s goal, every ounce of at-risk equipment installed on Super Heavy’s exterior will likely need to be carefully shielded. In theory, that’s the purpose of the aerocovers SpaceX has only just begun to fully install – let alone test – on Super Heavy B4.

Before Booster 4’s most recent installation on the orbital launch mount, SpaceX did install covers over a pair of hydraulic and heat exchanger racks but left all four composite overwrapped pressure vessel (COPV) racks and an umbilical port uncovered. After B4 was removed from the launch mount for the third time on December 30th, both covers were uninstalled. On January 14th, 2022, though, SpaceX rapidly installed all six covers for the first time and began sealing each cover’s exposed corners. On January 17th, SpaceX even installed aerodynamic surfaces around Booster 4’s protruding umbilical port, smoothing out any hypothetical airflow around the device.

Prior to main aerocover installation, SpaceX also added at least half a dozen small boxes seemingly designed to protect a number of thin metal probes that pierce through Super Heavy’s tanks and skin and are connected to avionics boxes. Additionally, while less visible, teams also worked to finish Super Heavy B4’s Raptor heat shielding with a large number of similar sheet steel covers and panels. Without official photos from SpaceX or another lift onto the launch mount, it’s impossible to know if Booster 4’s Raptor heat shield is fully closed out, but the shielding that runs around its circumference appears to be finished.

As it stands, Super Heavy B4 is likely just a few parts shy of true completion and is about as ready as it’ll ever be for static fire testing. More likely than not, those aerocovers and Raptor heat shields are essential for Super Heavy B4 to be able to perform more than one test at a time without immediately requiring major repairs. Unlike Starship, which has mostly tested three engines at once and only performed a few six-engine static fires, Super Heavy B4 may eventually test all 29 Raptor engines simultaneously.

When almost 30 engines are involved, even nominal preburner testing will likely produce a massive fireball that could engulf Super Heavy’s aft (if not the entire booster) with flames. For static fire testing, Raptors typically produce a smaller and briefer (but still substantial) fireball during shutdown, creating another potential source of damage to any sensitive hardware located anywhere on or in Booster 4’s thrust section. As such, Super Heavy aerocovers may be just as important for surviving static fires as they’ll be for surviving launches and landings.

It’s unclear if or when Super Heavy B4 will return to the orbital launch mount for wet dress rehearsal and static fire testing. SpaceX has ambiguous test windows scheduled from 10am to 10pm on January 18th, 19th, and 20th.