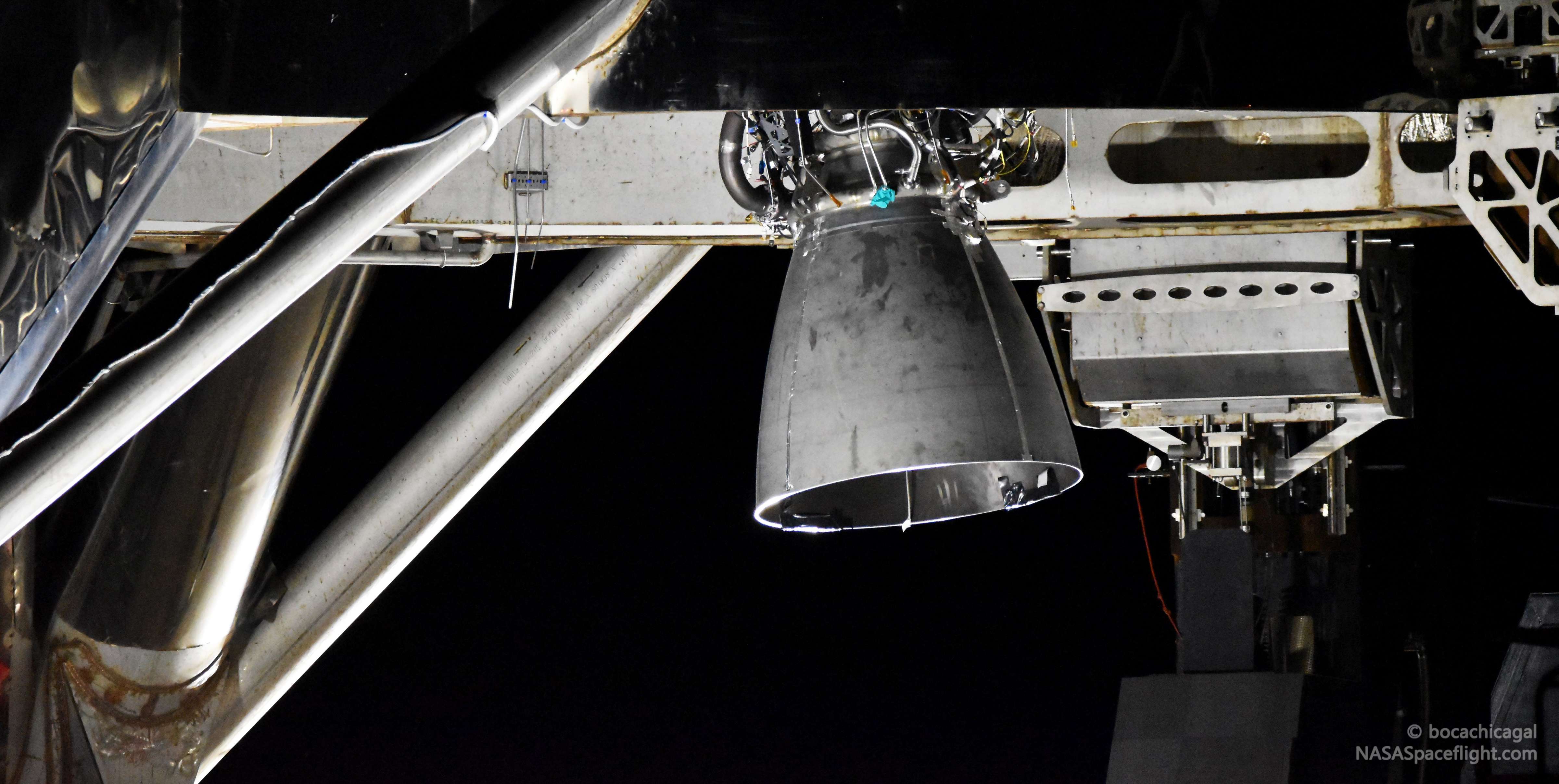 Designed to verify that Raptor’s thrust vectoring capabilities are in order and ensure that Starhopper and the engine are properly communicating, the wiggle test is a small but critical part of pre-flight acceptance and a good indicator that the low-fidelity Starship prototype is nearing its first hover test(s). Roughly 48 hours after a successful series of wiggles, Starhopper and Raptor proceeded into the next stage of pre-flight acceptance, likely the final more step before a tethered static fire.

Routine for all Falcon rockets, SpaceX’s exceptionally rigorous practice of static firing all hardware at least once (and often several times) before launch has unsurprisingly held firm as the company proceeds towards integrated Starhopper and Starship flight tests. Despite the fact that Raptor SN06 completed a static fire as recently July 10th, SpaceX will very likely put Starhopper and its newly-installed Raptor through yet another pre-flight static fire, perhaps its fourth or fifth test this month.

Although it would undoubtedly be easier, cheaper, and faster to skip that post-delivery static fire, it will simultaneously lower the risk of Raptor failing mid-flight and verify that Starhopper itself is healthy and ready for untethered hovering. Although SpaceX could likely live without Starhopper in the event that it’s lost during flight-testing, any failure capable of destroying the vehicle itself is at least as capable of severely damaging or completely destroying the spartan but still expansive test and launch facilities the company built over the course of several months.

Follow July 12th’s nighttime Raptor wiggle test, July 13th was mainly quiet and filled with inspections of Starhopper, Raptor, and other various work. The day after, however, SpaceX proceeded through several hours of propellant loading, ending with what looked like less energetic versions of the Raptor preburner ignition tests Starhopper previously performed with Raptor SN02.

In a staged-combustion engine like Raptor, getting from the supercool liquid oxygen and methane propellant to 200+ tons of thrust is quite literally staged, meaning that the ignition doesn’t happen all at once. Rather, the preburners – essentially their own, unique combustion chambers – ignite an oxygen- or methane-rich mixture, the burning of which produces the gas and pressure that powers the turbines that bring fuel into the main combustion chamber. That fuel then ignites, producing thrust as they exit the engine’s bell-shaped nozzle.

Although the fireworks are so subtle that they are easily missed, the conditions inside the preburner – hidden away from view – are actually far more intense than the iconic blue, purple, and pink flame that exists Raptor’s nozzle. This is because the preburners have to nurture the conditions necessary for the pumps they power to fuel the main combustion chamber. Much like hot water will cool while traveling through pipes, the superheated gaseous propellant that Raptor ignites to produce thrust will also cool (and thus lose pressure) as it travels from Raptor’s preburner to the main combustion chamber.

Thus, if the head pressure produced in the preburners is too low, Raptor’s thrust will be (roughly speaking) proportionally limited at best. At worst, low pressure in the preburners can completely prevent Raptor from starting and running stably and can even trigger a “hard start” or shutdown that could damage or destroy the engine. As such, to preburners fundamentally have to operate at higher chamber pressures (and thus higher temperatures) than the main combustion chamber (the big firey bit at the end). According to Elon Musk, Raptor’s oxygen preburner has the worst of it, operating at pressures as high or higher than 800 bar (11,600 psi, 80 megapascals).

Coincidentally, this is roughly equivalent to the pressure at the bottom of the Pacific Ocean.

In short, preburner testing is no less critical than full-on static fire testing with an engine like Raptor. July 14th’s test was also made doubly efficient due to the fact that preburner testing requires liquid propellant, which effectively makes the whole test a wet dress rehearsal (WDR) even before any engine ignition or partial ignition is involved. Per SpaceX moving from propellant loading to preburner/turbine testing, Starhopper is almost certainly healthy and operating as expected, an excellent sign that the ungainly vessel may be ready for a static fire of Raptor as early as 2pm CT, July 15th.