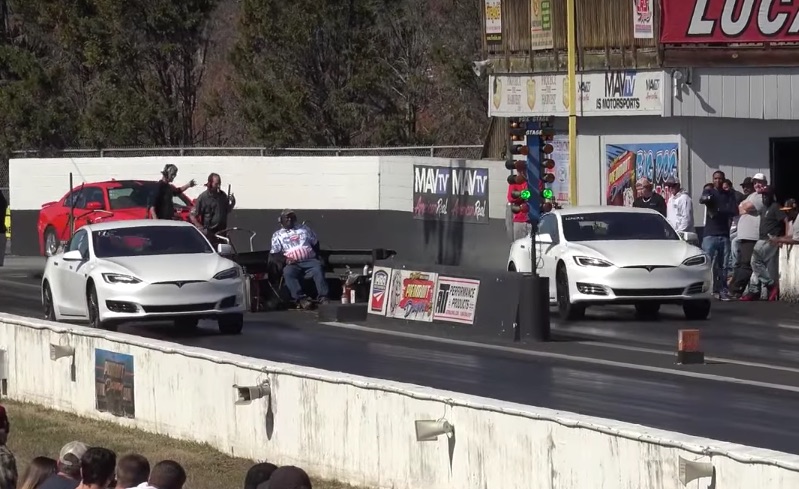 Tesla Racing Channel on YouTube pitted a “bare bones” Tesla Model S P100D without factory options against their modified Ludicrous P100D in a head to head drag race, with the goal of discovering impact on vehicle performance as a result of weight savings.

The Model S owners behind the YouTube channel are well known in the local drag racing circuit with their fleet of Tesla Model S’. The crew has previously set the first 0-60 and 1/4 mile records in their Ludicrous Model S P90D, followed by another record in their Ludicrous+ Model S P100D that’s modified with lightweight aftermarket wheels.

This time, they’re back on the drag strip with a top-of-the-line performance version of the Tesla Model S, but without the factory options such as the high amperage onboard charger, premium sound system, and motorized sunroof.

The heads up drag race between stock versus modified turned out to be a shocker. In the words of the Tesla Racing Channel, “Our Tesla P100D with lightweight wheels got SMOKED!”

Can the Model S or Tesla’s next generation Roadster with ‘Maximum Plaid’ become even quicker? Engineering Explained dove into the theoretical quickest 0-60mph time achievable on street tires and came to a conclusion of 2.05 seconds. This has not been achieved in real life on a production vehicle using street tires, but as tire technology and launch control continues to improve it’s a matter of time before we start seeing news of someone cracking the 2.05 or even the 2 second 0-60 barrier.