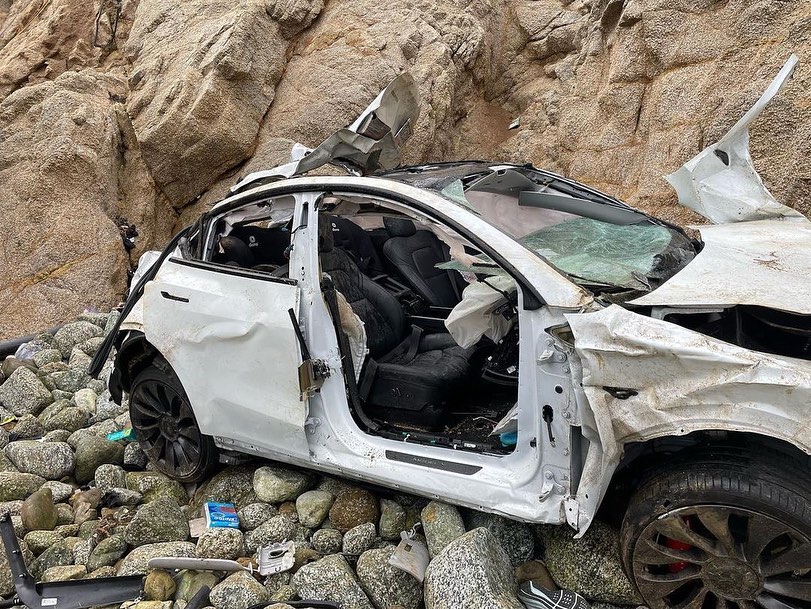 Yesterday, the internet was shocked by the news that a Tesla had plunged 250 feet off a cliff at Devil’s Slide in California. All of the all-electric vehicle’s occupants — a family of four — survived, with the children coming out of the incident with minor to moderate injuries while the adults came out with more serious injuries.

An update from authorities provided a dark and disturbing turn into the harrowing and practically miraculous incident. While the mangled wreckage of the Tesla involved in the crash was chilling in its own right, the fact that all four occupants survived thanks to the efforts of rescuers was nothing short of heartwarming. Unfortunately, it seems like the incident was intentional.

As noted in an ABC7 News report, Dharmesh A. Patel of Pasadena, the father of the family, has been arrested on suspicion of attempted murder and child abuse. This was after authorities noted that he intentionally drove his Tesla off a cliff despite having his wife, Neha, and their two children, aged seven and four, inside the vehicle.

Following his release from the hospital, Patel would be booked into a San Mateo County Jail. “CHP investigators worked throughout the night interviewing witnesses and gathering evidence from the scene. Based on the evidence collected, investigators developed probable cause to believe this incident was an intentional act,” the highway patrol noted.

The investigation into the incident is ongoing.

The reasons behind Patel’s actions remain unknown for now, though the incident has left those who knew the family shocked. The Providence Holy Cross Medical Center in Mission Hills, where Patel is listed as a doctor, has noted that it is deeply saddened by the news of the incident.

“Providence Holy Cross Medical Center is deeply saddened to learn of a traffic incident involving one of our physicians and his family. We are extremely grateful there were no serious injuries. We will not respond further, as this incident is under investigation,” the medical center noted.

Neighbors of the family also noted that the Patels seemed like a normal, happy family. “They’re like ideal neighbors. It seemed like they had a great holiday. They went to go see both parents. It just seemed very happy and great,” Sarah Walker, one of the Patels’ neighbors, noted.

Another neighbor, Heather H., also told ABC7 News that something did seem off on Tuesday, and she was wondering why they did not come home. “They’re lovely people. This is really heartbreaking,” the neighbor noted.

Watch a recent segment on the incident in the video below.