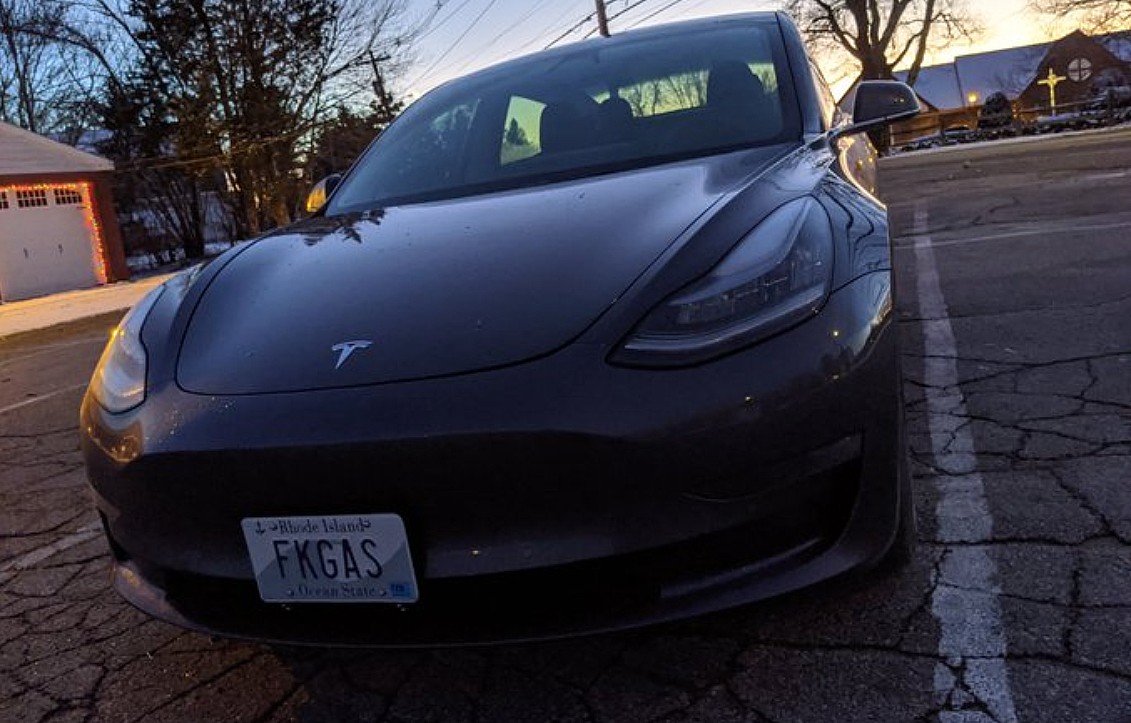 A Tesla Model 3 owner won a preliminary injunction on Friday against the Rhode Island DMV in a dispute involving the use of a vanity plate displaying the message “FKGAS.” In response to an anonymous complaint earlier this year, the agency belatedly determined the messaging was offensive and that the plate must be returned. However, a lawsuit was filed in partnership with the state’s American Civil Liberties Union (ACLU) branch contesting the decision on constitutional grounds.

The “very essence of vanity plates is personal expression,” wrote U.S. District Judge Mary McElroy in the decision granting the injunction, agreeing that the lawsuit’s case was likely to succeed on the merits. “The revocation of the license plate, which would prohibit Mr. Carroll from expressing his views on fossil fuel propulsion of motor vehicles, would stifle him in an irreparable way.” The judge also suggested the overall authority of DMVs to reject “offensive” vanity plates was unconstitutional, according to a report on the case in the publication The Providence Journal.

This initial victory ensures that the owner, Sean Carroll, may continue displaying the vanity tag until a full case decision is made. “I am thrilled with Judge McElroy’s decision on my First Amendment right allowing me to express my views through my vanity plate,” Carroll said in a statement published by the Rhode Island ACLU. The Model 3 owner also acknowledged that, while the plate’s full translation was intended as “fake gas,” it could also be perceived as conveying the message “fuck gas,” a meaning he supported as well.

In a significant decision for free speech advocates and vanity plate enthusiasts alike, a federal judge said a Scituate man can keep the "FKGAS" plate on his Tesla for now. The RI DMV has tried to cancel it. https://t.co/WEogyg9EGZ

In the lawsuit, Carroll’s motivation for obtaining the vanity plate was “because he wished to convey, through the license plate, a personal philosophical and political message concerning his views about gasoline-powered automobiles and the environment.” He previously explained that the idea came after a conversation with his daughter during which he described how the all-electric vehicle was powered by their home’s solar panels. His daughter remarked that the car runs on “fake gas,” and thereby the “FKGAS” vanity plate was born.

“‘FKGAS’ is my personal statement challenging everyone to look at the world differently. Gas isn’t the only option when it comes to powering your vehicle,” Carroll said in a statement to The Providence Journal. “My choice for a vanity plate has already brought more attention to alternative fuel sources and electric vehicles.”

As another important part of Carroll’s case, the DMV already issued the Model 3’s plate twice before deciding to recall it, citing “inappropriate language.” The Tesla owner had driven with the message on his vehicle for at least five months before the agency reneged in response to an anonymous complaint. A key point of the arguments of the case filed with the ACLU was the arbitrary nature of the DMVs decision making process on vanity plates, ultimately pitting those decisions against first amendment protections such as Carroll’s views.

“[T]he DMV has prohibited such combinations as AIDS, CHRIST, GAY, JESUS, LESBIAN, REDNECK and YANKEE. But it has issued plates that read CHRIST, JEWISH, REDNEC, and REDNEK. It has prohibited words that are typically denigrating, such as CHUBBY and SLOB, but allowed FATT and OLDFRT,” Judge McElroy detailed in her decision.

The full lawsuit will be reviewed and decided in the coming months.