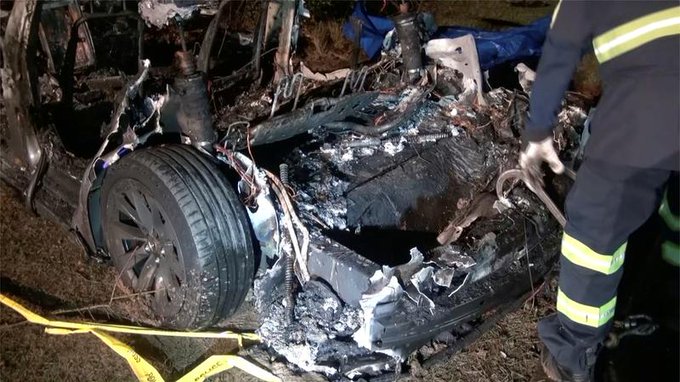 Immediately following the fatal Tesla crash in Texas this weekend, reports from both local and national media outlets emerged citing the statements of Harris County Pct. 4 Constable Mark Herman, who remarked that police were 100% certain that there was no one in the driver seat of the ill-fated Model S when it crashed. Herman also commented that the Tesla fire was so severe that it took over 30,000 gallons of water and four hours to extinguish the flames from the crash, and that firefighters had to reach out to the EV maker for help in battling the fire.

These statements have since been debunked (at least to some degree) by Tesla CEO Elon Musk, who noted that data logs that have been recovered so far from the ill-fated Model S indicate that Autopilot was not enabled during the crash, and that the vehicle did not have any Full Sell-Driving functions activated. Musk’s update essentially threw a wrench on the pervading narrative that Autopilot likely caused the tragic crash.

Your research as a private individual is better than professionals @WSJ!

Data logs recovered so far show Autopilot was not enabled & this car did not purchase FSD.

Moreover, standard Autopilot would require lane lines to turn on, which this street did not have.

And now, even the reports about the Tesla fire have been thrown into question–by the man whose team extinguished the blaze no less. In a statement to the Houston Chronicle, Palmer Buck, fire chief for The Woodlands Township Fire Department, noted that contrary to some reports in the media, the Tesla Model S fire did not burn out of control for four hours.

Interestingly enough, Buck remarked that his team actually managed to put down the fire within two to three minutes, which was enough for authorities to see that there were occupants in the vehicle. After these first two to three minutes, it was only a matter of keeping the batteries as cool as possible by pouring small amounts of water into the damaged battery pack. Buck described the fire department’s strategy in the following statement.

“With respect to the fire fight, unfortunately, those rumors grew way out of control. It did not take us four hours to put out the blaze. Our guys got there and put down the fire within two to three minutes, enough to see the vehicle had occupants. After that, it was simply cooling the car as the batteries continued to have a chain reaction due to damage.

“We could not tear it apart or move it around to get ‘final extinguishment’ because the fact that we had two bodies in there and it was then an investigation-slash-crime scene. We had to keep it cool, were on scene for four hours, but we were simply pouring a little bit of water on it. It was not because flames were coming out. It was a reaction in the battery pan. It was not an active fire,” Buck said.

As for the rumors that the fire department had to call a Tesla hotline for tips on how to handle a battery fire, the Fire Chief stated that these reports were untrue. “We did not (call Tesla), and I do not know where (that rumor) came from. There is a chance someone else did, maybe the Harris County Fire Marshal, but we did not call (Tesla). Tesla has an emergency manual for first responders,” Buck said. He also noted that he is not aware of Tesla having a hotline for tips on how to control a battery fire.

Buck also provided some new details about the Model S crash and how the fire department was involved. According to the fire chief, the first calls about the incident did not involve reports about a car at all. Instead, initial reports were about a fire in the woods. And while the Model S fire was notable when the firefighters arrived, it only took minutes to control the blaze from the vehicle.

“The first calls that came in were a fire in the woods. Then we got at 9:30 p.m. where we got the first call when someone said, ‘I see a car in a tree, and it is on fire. They reported a car hit a tree, and it had exploded… That is when we added extra units (to the response). There is a big lake, and (the accident) was just to the left of the lake, closer to the exiting part of the street, not the end of the cul de sac. It was at an undeveloped lot.

“(The Tesla) was heavily involved in flames. When the fire was put out, it was noticed there were two bodies (inside), and they were deceased. They continued extinguishment of the woods around (the car), putting out the trees and pine needles and what have you. I was there probably five to 10 minutes after that and at that point, every once in a while, the (battery) reaction would flame and it was mainly keeping water pouring on the battery,” Buck explained, adding that this was a process recommended by Tesla in cases of burning batteries.

While a number of the initial reports about the tragic Tesla crash this weekend have been debunked by Elon Musk and now, the fire chief for The Woodlands Township Fire Department, the incident continues to attract some degree of drama. As per recent reports, Harris County Pct. 4 Constable Mark Herman has stated that investigators would be serving a search warrant on Tesla to gain all data from the ill-fated Model S. Federal regulators from the NHTSA and NTSB have also launched an investigation into the crash.