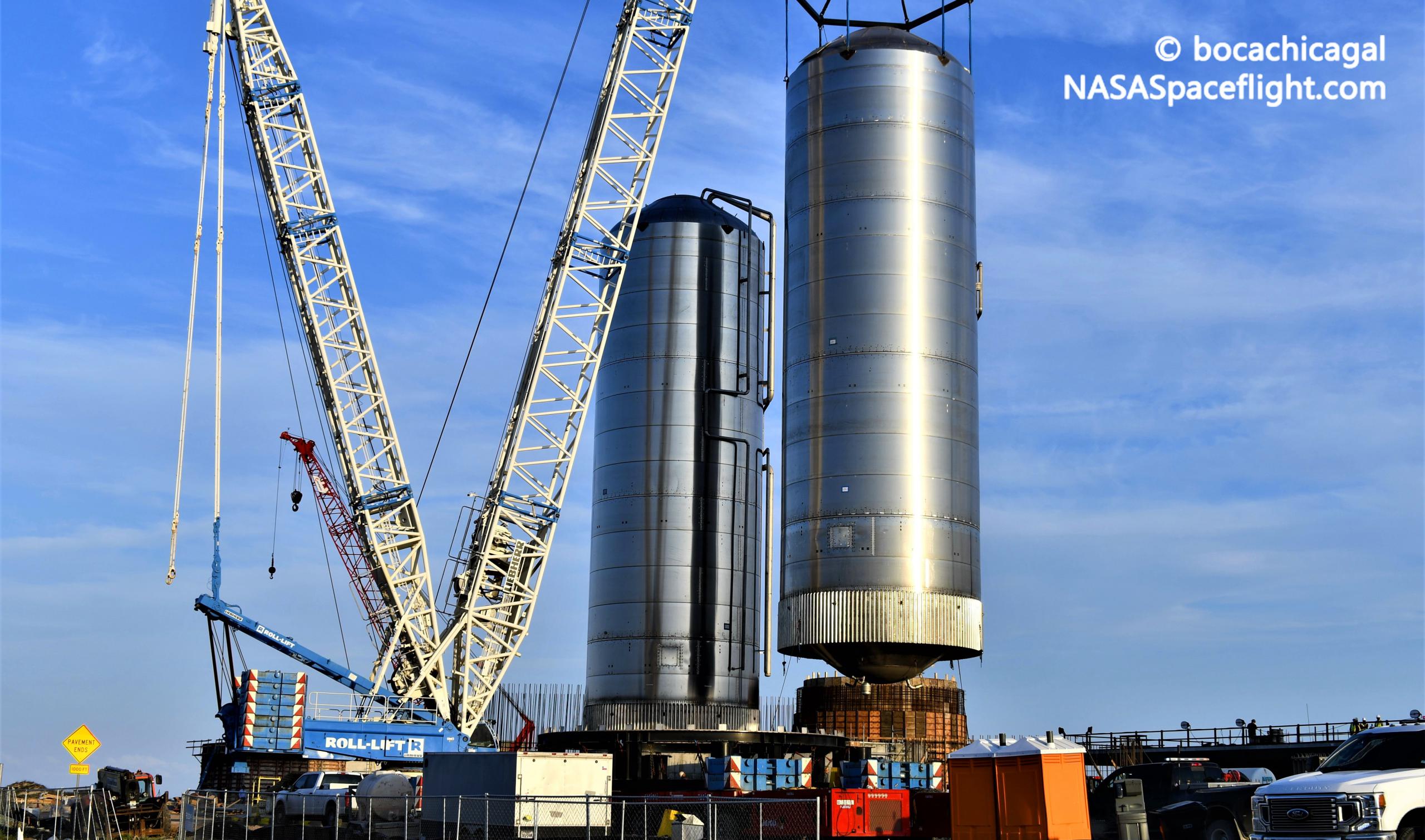 This is getting out of hand, now there are two of them! (NASASpaceflight - bocachicagal)

For the second time in two weeks, SpaceX has rolled a ‘Starship-derived’ propellant tank to the next-generation rocket’s first orbital launch pad, continuing a recent burst of construction activity.

Precisely two weeks ago, SpaceX rolled the first of those massive ground support equipment (GSE) propellant tanks the 1.5 miles from its Boca Chica rocket factory to a nearby launch complex. Built with the same parts, facilities, and equipment as flightworthy Starship prototypes, SpaceX’s plans to build grounded storage tanks out of rocket parts went from a complete surprise to initial hardware delivery in less than two months.

Two weeks later, SpaceX has already completed the second of at least seven similar or identical tanks that should be able to store enough propellant for two back-to-back orbital Starship launches – and a third ‘GSE’ tank is just a week or so behind it.

As previously discussed on Teslarati, SpaceX’s decision to use a literal rocket factory to build custom propellant storage tanks is surprisingly revealing with a few reasonable assumptions in place.

SpaceX is effectively taking interchangeable Starship parts, slightly tweaking a handful of them, and turning what could have been a rocket into a propellant storage tank. This is significant because relative to all other rockets in history, even including SpaceX’s own Falcon 9 and Heavy, building storage tanks with unchanged rocket parts on a rocket assembly line would be roughly akin to hiring Vincent van Gogh to paint lane lines.

The existence of self-built propellant storage tanks virtually identical to flightworthy Starship airframes all but guarantees that SpaceX is already building Starships for a few million dollars each – and possibly much less.“

Aside from potentially being dirt-cheap bulk storage tanks that all but guarantee SpaceX can produce Starship and its Super Heavy boosters for pennies on the dollar of any other rocket in history, SpaceX is quickly demonstrating that it can build a lot of them – and quickly. Parts of Starship prototypes SN17 through SN20 and Super Heavy boosters BN2 and BN3 continue to slowly trickle out of SpaceX’s factory and Starship SN16 is steadily progressing towards completion to take over wherever SN15 leaves off.

However, at least a majority of SpaceX’s focus appears to be set on mass-producing propellant storage tanks as quickly as possible in order to prepare Starship’s orbital launch pad – deep into construction – for flight tests involving Super Heavy. Just last month, following a sourced report from NASASpaceflight.com, CEO Elon Musk confirmed that SpaceX intends to attempt Starship’s first launch on a Super Heavy booster as early as July 2021 – just three months from now.

For obvious reasons, the odds are firmly stacked against SpaceX attempting Starship’s first orbital launch mere months from now, though such an attempt would still be extremely impressive if it happens in 2021 at all. To even attempt that extraordinarily ambitious feat, SpaceX will have to complete at least a barebones ‘rough draft’ of its planned orbital launch complex, including at least four Starship-style GSE tanks.

Towards that end, GSE tank #3 (GSE-3) is already more than half complete and parts of GSE-4 are in work, likely meaning that SpaceX will have enough installed propellant storage capacity for orbital Starship launch attempts less than a month from now. It remains to be seen if SpaceX will power through tanks 5 through 7 after 3 and 4 are complete, or if the focus will shift back to Starship and Super Heavy prototype production.

Either way, SpaceX is wasting no time constructing a brand new super heavy-class launch pad and a tank farm the likes of which has never been seen before. For now, we’ll have to wait and see how long it takes Starship and Super Heavy to catch up.