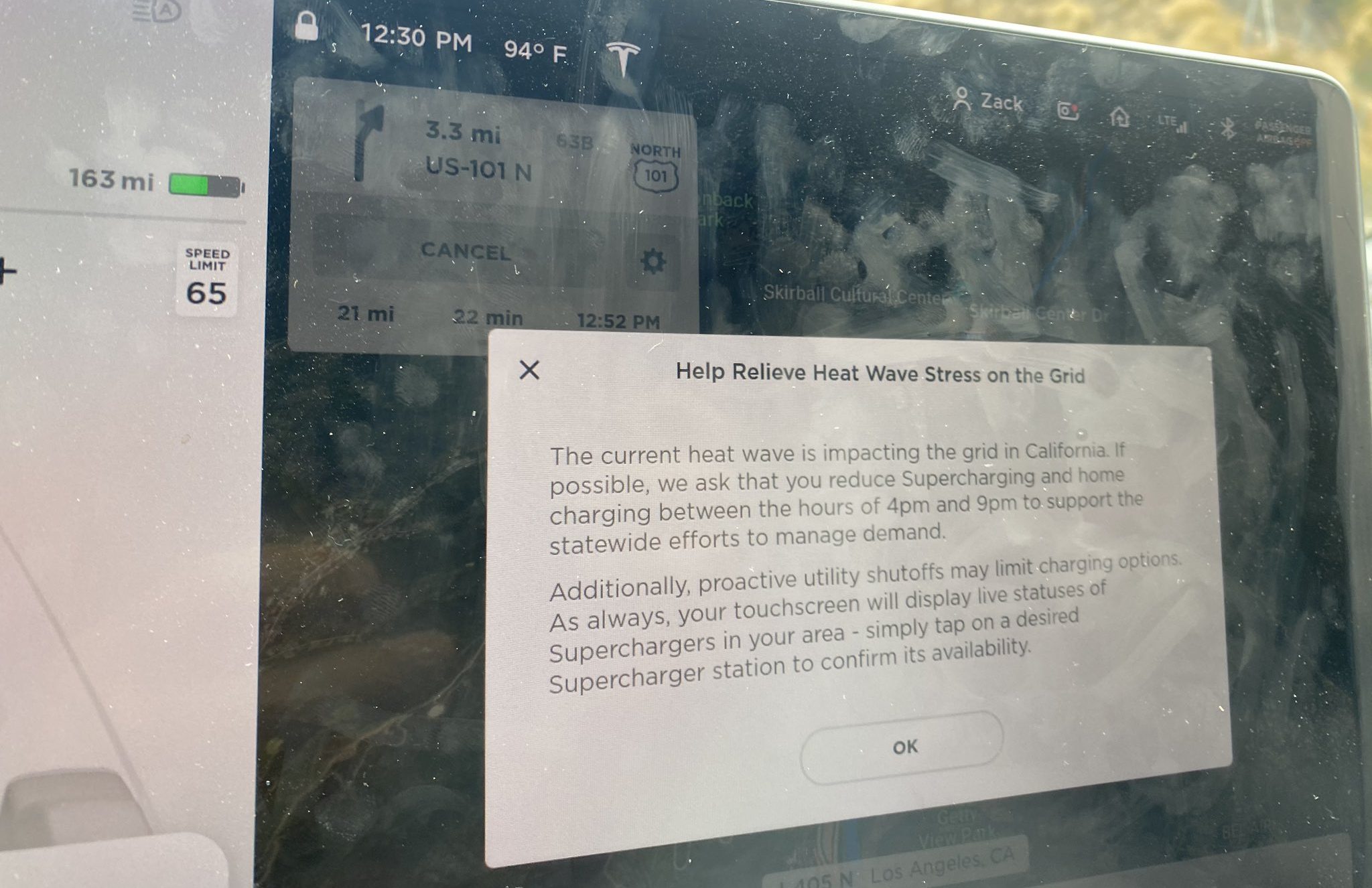 Tesla asks for help from owners during California heat wave

Tesla is asking owners of its electric vehicles in California to limit Supercharging and home charging between the hours of 4 PM and 9 PM to “help relieve heat wave stress on the grid.”

A message appeared on the touchscreen of Tesla’s connected cars on Monday, August 17, that requested owners limit charging during peak hours because it would help to support the statewide efforts to manage demand.

Just got this message on my screen- smart of Tesla. Thx @elonmusk @Teslarati @cleantechnica pic.twitter.com/coWfbSzvir

The message, in its entirety, stated:

“The current heat wave is impacting the grid in California. If possible, we ask that you reduce Supercharging and home charging between the hours of 4pm and 9pm to support the statewide efforts to manage demand.

Additionally, proactive utility shutoffs may limit charging options. As always, your touchscreen will display live statuses of Superchargers in your area – simply tap on a desired Supercharger station to confirm its availability.”

The request comes at a time where millions of residents in the State of California are facing potential blackouts because of increased stress on the grid.

According to a report from NBC News, The California System Operator warned that it told some companies to turn off power in rolling blackouts because demands for electricity continue to rise as residents in the state try to air condition their homes.

The energy crisis is so severe that Governor Gavin Newsom signed an emergency proclamation on Monday that allowed “backup energy sources” to be utilized during peak hours.

Tesla’s request is an attempt to relieve some of the electricity demand from the grid. If owners can hold off on charging their vehicles during the peak hours, it would contribute to some utility companies not having to shut down power to homes, which occurred last Friday when 410,000 residences and businesses were subjected to an hour-long blackout.

California officials have also issued flex alerts through Wednesday night to control demand. Residents are advised to conserve energy in any way possible through simple tasks like turning off appliances, setting air conditioners to 78 degrees or above, or turning off lights when a room is not occupied.

Tesla CEO Elon Musk has offered a lending hand in the past when blackouts have rolled through California. In November, when massive wildfires threatened residents with extensive power failures, Musk provided a $1,000 discount on the company’s solar and energy storage products to anyone affected by the power outages.

Tesla asks for help from owners during California heat wave