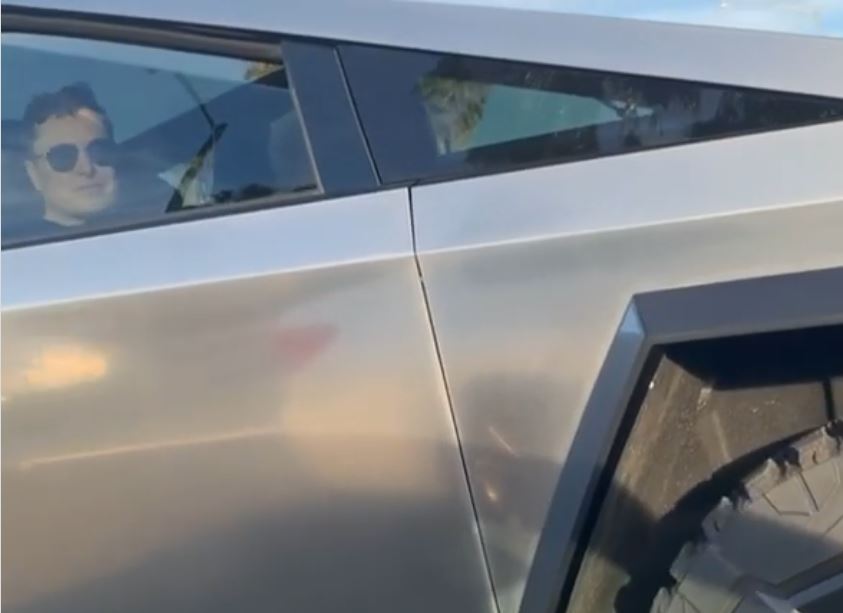 Tesla CEO Elon Musk was spotted riding shotgun in the futuristic Cybertruck and cruising near SpaceX headquarters while filming a segment for the Emmy Award-winning motoring show Jay Leno’s Garage.

Instagram user gorgeouserika shared a short video of the Cybertruck sighting where Elon Musk is seen waving to her from the passenger side while Jay Leno pilots the monstrous truck past the Boring Company’s Los Angeles test tunnel.

“There you go, Jay Leno and Elon cruising down Crenshaw in this … car,” gorgeouserika was heard saying in the video.

The Cybertruck sighting video also shows the impressive headroom of the upcoming Cybertruck. The Tesla chief is approximately 6’2” in height and there’s still a good amount of clearance between Musk’s head and the Cybertrucks roof.

Elon Musk was photographed by a Teslarati source while appearing to inspect the motorized rear tonneau of the truck’s “vault” with Leno’s film crew around him.

Another shot featured the upcoming all-electric utility truck glistening under the California sun and framed near the Tesla Supercharger monolith.

During the said filming for a segment on Jay Leno’s Garage, the Cybertruck was flanked by the black truck of the camera crew and a Model 3. In the shot below the Cybertruck was captured in the same frame with the Space X headquarters and its iconic Falcon 9 rocket booster.

The upcoming Tesla Model Y crossover was also earlier rumored to appear in the same show following an impromptu tour of the vehicle’s interior at the San Luis Obispo Supercharger in the past week,  but it wasn’t caught on camera last Friday.

Teslarati has reached out to the program staff at Jay Leno’s Garage for confirmation of the airing time of the presumed segment. We will provide an update via Twitter and Instagram upon hearing back.