In what appears to be a rather assertive tactic to push the Model 3 en masse to Chinese customers, Tesla has opted to offer Enhanced Autopilot as standard for the electric sedan. As could be seen in Tesla’s order pages for China, the offer appears to be available only for Model 3 purchases. Pages for the Model S and X still list the driver-assist suite as a 46,300 yuan (around $6,800) addition.

The inclusion of Enhanced Autopilot is available for all Model 3 orders in the country, meaning even reservations for the Long Range RWD Model 3 –currently the most affordable Tesla available in China — include the driver-assist suite for free. That said, a local Tesla sales representative has reportedly stated that the Enhanced Autopilot offer is only available for Chinese customers temporarily, as noted by owner-enthusiast Vincent Yu after a conversation with a contact in China. 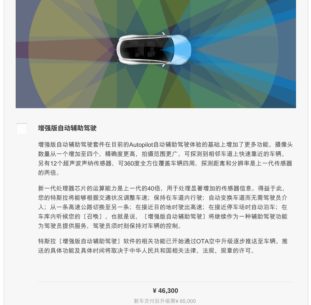 Tesla’s Enhanced Autopilot order pages for the Model 3 and Model S in China as of February 8, 2019. (Credit: Tesla)

In a way, the inclusion of Enhanced Autopilot as a standard feature for the Model 3 could be seen as a clever sales tactic in the Asian economic superpower. China is the world’s largest market for electric cars, and until Tesla starts vehicle production in Gigafactory 3, the Model 3 faces import tariffs when it enters the country, resulting in higher prices for the sedan. The Long Range AWD Model 3, for one, costs 499,00 yuan (around $74,000) before options, a notable premium over the vehicle’s current starting price in the United States of $49,900 before savings.

By offering Enhanced Autopilot as standard for Chinese customers, Tesla is giving a notable incentive for buyers who order the vehicle immediately. This, together with the recent introduction of the Long Range RWD Model 3, would likely result in a boost to the company’s sales, especially this first quarter of 2019. Elon Musk highlighted the need to move as many Model 3 in China at the soonest time possible in the recently held Q4 2018 earnings call.

“We get them (the Model 3) to China as fast as possible. In China, we were also — yes, we don’t know what’s going to happen with the trade negotiations. So that’s very important to get those cars, especially to China as soon as possible. We hope the trade negotiations go well, but it’s not clear. But we need to get them there while there’s sort of a de facto — sort of a truce on the tariff war,” Musk said.

Ultimately, Tesla’s Enhanced Autopilot strategy in China could very well be a preview of what is to come in the future, especially considering the company’s work with its Full Self-Driving suite. With Tesla refining its vehicles’ actual autonomous driving features, it would not be surprising if Tesla starts making Enhanced Autopilot standard for all its cars in the coming years. Overall, Tesla aims to make the safest vehicles on the market, and in the age of full self-driving, intelligent driver-assist features like Autopilot would most definitely help the company keep its customers safe on the road.