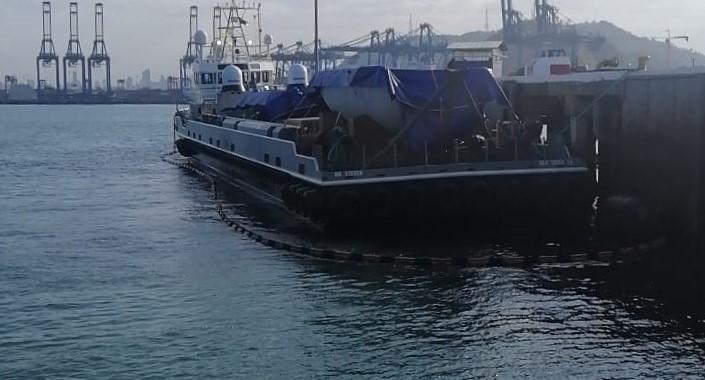 Mr. Steven was spotted by local Panamanian Hugo Tell on February 6th prior to transiting the Panama Canal. (Hugo Tell)

Iconic SpaceX vessel Mr. Steven has completed a successful transit of the Panama Canal as of February 7th, leaving the fairing recovery ship approximately 3-4 days from arrival at its new home in Port Canaveral, Florida.

Mr. Steven’s move from the West Coast to the East Coast comes shortly after a series of controlled fairing recovery tests – dropped by helicopter before deploying a parafoil – brought the vessel closer than ever before to successfully snagging a Falcon fairing out of the air. Thanks to webcams at the landmark, Mr. Steven’s trip through the Panama Canal also revealed that his arms were uninstalled for the coast swap, while two fairing halves – covered in tarps – stood out on the ship’s large deck.

Aaaaand the grand finale, a gif of Mr. Steven’s transit through the Panama Canal’s first western lock (Miraflores). Probably the last we’ll see of him until Port Canaveral, with an ETA around ~4 days from now 🙂#SpaceX pic.twitter.com/DIus6K5hK5

Although the presence of two fairing halves could be a sign of something else, it could indicate that SpaceX has plans to continue its controlled fairing drop/recovery tests, albeit this time in the Atlantic Ocean. Thanks to a sharp-eyed local observer, it can be observed that, while topped with tarps and safely secured, the fairing halves aboard Mr. Steven had no additional protection against sea spray and the elements over the course of a 5000+ mile (~8000 km) journey at a cruising speed of roughly 20 mph (~32 km/h). In other words, they are most certainly not going to be reused.

If not for reuse, then the only reason Mr. Steven would need to bring fairings to Florida is if there is some need for fairing recovery development hardware (halves that can be abused without opportunity cost), either for more basic mechanical and interface tests with fairings and nets or to continue SpaceX’s program of experimental drop testing.

Is your #MrSteven here in Panama @elonmusk and @SpaceX ? pic.twitter.com/GvTNGYQU9K

Intriguingly, although SpaceX released a second video of “one” of Mr. Steven’s final West Coast catch tests, some basic sleuthing can easily determine that the test shown in the January 29th video probably occurred more than two weeks earlier, on January 10th. This means that one final helicopter drop test was performed (January 26th) before SpaceX departed Port of LA for Florida on the 29th. Some might conclude, then, that SpaceX’s latest drop tweet was more than a little coy, perhaps indicating that the results of the Jan 26 test may have been appreciably different than the extreme near-miss experienced on the 10th.

While the company’s history – combined with CEO Elon Musk’s welcome tendency of sharing good news almost as soon as he hears it – suggests that the Jan 26 test was probably not a success, SpaceX could be playing its development cards close to its chest when it comes to fairing recovery.

One of Mr. Steven’s final West Coast fairing recovery tests before shipping out for the East Coast. Wait for it… pic.twitter.com/A7q37Gpllu

Regardless, SpaceX clearly has no plans to end its experimental fairing recovery program with success so agonizingly within reach. Mr. Steven’s move to Florida sets the vessel up for a dramatic increase in available post-launch fairing recovery attempts at the same time as Falcon fairings likely still cost around $3 million apiece and continue to pose the same conundrum Musk raised in mid-2017.

“Imagine if we had a $6 million pallet of cash falling through the sky. Would we try to catch it? I think the answer is yes.” – Elon Musk, July 2017

Although the cost of SpaceX’s fairing recovery program is probably several tens of millions of dollars at this point, it seems probable that Musk would still stand behind his thought experiment. Assuming SpaceX can cost-effectively reuse fairings once recovery is assured, a development program costing upwards of $50-100M could be entirely recouped after just 10-20 dual fairing recoveries, compared to the 21 fairings SpaceX flew in 2018 alone. As long as Falcon 9 and Heavy are likely to continue operating for several more years (all but guaranteed), fairing recovery should still prove worthwhile if SpaceX can close the recovery gap within the next 6-12 months.