Tesla is looking at Boring Co. tunnels to transport materials for Model 3 production

Elon Musk’s The Boring Company could be brought in to help the Tesla Factory at Fremont in the manufacturing of the Model 3. In a statement during Wednesday’s Q4 earnings call, the Must noted that the company is looking to build a tunnel between its 901 Page Ave. seat factory in Fremont to the main Tesla Factory roughly 3 miles away at 45500 Fremont Blvd.

While discussing an inquiry from Bank of America’s John Murphy, who asked about the company’s production plans for the Model 3 and a possible manufacturing limit on the Tesla Factory, CTO JB Straubel stated that issues do emerge in the transportation of materials from one facility to the next.

According to the Tesla executive, the company is developing high-density and high-velocity lines, but limits emerge when it comes to how quickly materials can get transported from one line to another. Thus, when the Model 3 production hits its full pace, the limit to production would lie in how many trucks can dock after going to and from each factory.

During these discussions, Tesla CEO Elon Musk unveiled a novel idea, stating that the California-based electric car maker and energy company would be using The Boring Company tunnels as a way to expedite the transportation of materials from one facility to the next.

“We are looking at building tunnels, using The Boring Company’s thing, because we have, for example, our seats production is at a separate building on Page. And we have a bunch of trucks moving seats back and forth between both the primary Fremont production and the seat factory.

“And we actually get constrained on how many trucks can we dock and undock at the seat factory, which is only, I don’t know, half a mile or a mile away from the vehicle plant. So it’ll be pretty easy to just have a tunnel, do an automated conveyance from seats to the factory,” Musk said.

Overall, Musk is optimistic about the potential of using The Boring Co.’s machines and tunnels as a way to help increase the pace of Tesla’s manufacturing. The Tesla CEO even noted that if the company manages to accomplish this, the optimal pace of the main Fremont facility could improve to 700,000 vehicles per year, comprised of 600,000 Model 3 and 100,000 Model S and X.

“And there are things we can do, where we can build sub-systems and then transport sub-systems to Fremont. These things get increasingly difficult, but they’re all doable. But I can see a path where we get to say 600,000 Model 3 production and 100,000 S and X, so maybe 700,000, which should be like almost 50% more than GM or Toyota got out of the plant. I mean that seems achievable,” Musk said.

Tesla’s Fremont Blvd. and Page Ave. facility are roughly three miles apart by car, which, under normal conditions, would take about 10-14 minutes of travel, according to Google Map estimates. With a tunnel system in place, the time it would take to transport materials between the two factories would be significantly reduced, along with the infrastructure needed to support a high volume of commercial trucks.

Elon Musk did not specify any other details about the idea, though the online community has posted a rough idea of where the tunnel between the main Fremont facility and the Page Ave. factory might run. A link to the possible tunnel between the two plants could be viewed below. 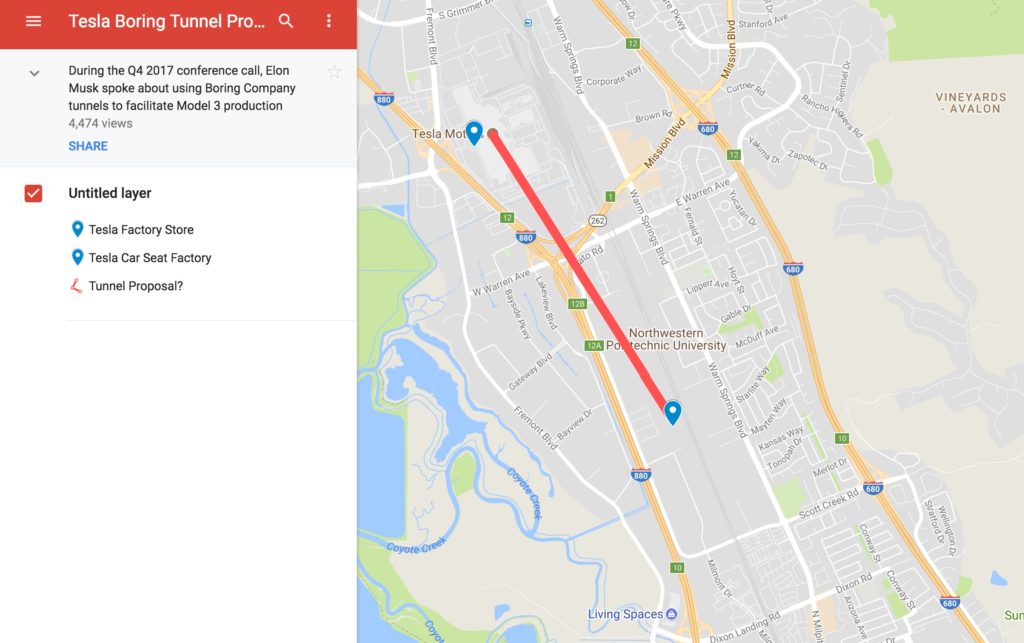 As we covered in a previous report, The Boring Co. is currently attempting to secure all the permits and documentation needed to dig a proof-of-concept tunnel from northeast Westchester to Brentwood, CA. The proposed 6.5-mile tunnel system is planned to run under Sepulveda Boulevard, right across Culver City, and is aimed to showcase the benefits of Elon Musk’s tunnel system to the city’s traveling public.

Tesla is looking at Boring Co. tunnels to transport materials for Model 3 production