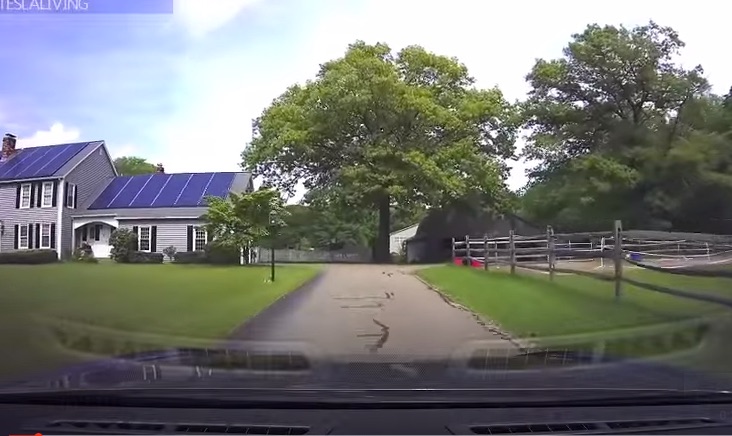 Tesla released the feature to automatically open and close your garage doors through “HomeLink” back in the first iterations of version 7.1 which I had moderate success with, but given the more recent over-the-air updates being rolled out to its firmware I decided to revisit the feature and see how it will perform for my particular needs. In my case, it’s operating a 3 car garage.

I’ve been living with 7.1 and using the new HomeLink functionality for many months now,
and as a result of that I’ve become really accustomed to having it always available to me.  The feature works for me about 99% of the time, but it took some fiddling to get it to a happy place.

I have a 3 car garage which you’ll see in the videos I describe later. All three doors are programmed into my HomeLink so I can close any given door when I’m leaving the house. From reading discussions online it seems as if not that many people attempted to do this, and rightfully so because doing so seems to cause confusion for the system. When I originally set up HomeLink two years ago, I programmed my three doors right in front of each door. Garage doors are obviously near each other and non-military based GPS isn’t very accurate, so there’s a chance for the car to be confused about which door it’s supposed to be operating.

To remove any possibility of further confusing HomeLink I first drove away from the house to ensure I was starting from a clean slate. For the doors that I did not need to auto-open I did a “reset location” operation. In other words don’t program multiple garage doors from the same location.

I tried setting this from a few locations, performing the “reset location” operation at each location until I got it just right. For various reasons I had to install my charger towards the rear of my garage which means I need to back into it. Thanks to parking sensors and the great rear view camera it has never been an issue for me.

As I pull up to my garage I swing in towards the garage and then angle away so I can back in. Getting the open position just right took some time but it was worth it to me.

In the video below you’ll see the door start to move about the time I get to the 2nd garage door. I didn’t press any buttons, it just did this for me and does it correctly about 99% of the time.

HomeLink auto-close is a little more flaky for me even after having spent some time tweaking it. Because the hardware for HomeLink in the Model S only exists in the front of the car combined with the fact that I back into my garage, this means that the vehicle is and its HomeLink sensors are pointed away from the garage as I leave each morning.

I found that if I very slowly roll out of the garage my rate of success for HomeLink to operate as intended increases dramatically. That said it still fails enough for me to double check via my review mirror each time to make sure my garage door didn’t remain open.

For some reason bad weather seems to make this worse. I’d say auto-close works about 80% of the time which is just enough of a failure rate to be annoying but not enough for me to give up on it. I really wish Tesla had hardware in the front and the back to handle this scenario. Perhaps they’ve already done that on newer cars.

HomeLink auto open/close is a small feature Tesla slipped into  on of its minor releases. While it was intended to help the Summon feature and Autopilot cars, it’s still been very helpful to me as a “classic” Model S owner without those capabilities.

One of my big concerns as Tesla continues to grow and expand is that they neglect the original buyers of the Roadsters and Model S and focus solely on newer cars and the needs of those owners. A great amount of software tuning and updates have gone into those Falcon Wing Doors, and probably a rumored HUD for the Model 3. Meanwhile, the Navigation system (on all cars) is still severely lacking in some areas (waypoints anyone?), and many of these other areas could use some tuning.