Tesla is moving closer to starting the manufacturing of its all-electric vehicles at its new facility near Austin named Gigafactory Texas. Production could begin extremely soon as new filings with the Texas Appraisal Review Board (ARB) reveal the imminent completion dates of each project, along with its value. The projects were individually filed by Tesla and officially registered with the State of Texas on November 19th, essentially hinting toward their approval and registration with the state’s public records.

Tesla filed and successfully had the Body in White, Stamping, Casting, Paint, and General Assembly facilities of Gigafactory Texas registered with the ARB. The documents were originally shared by @MarcoRPTesla on Twitter. 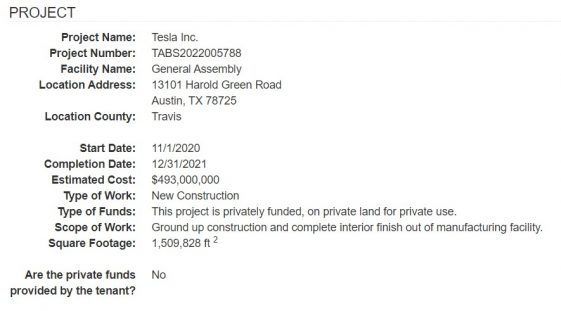 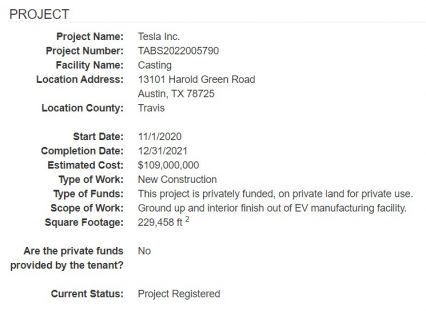 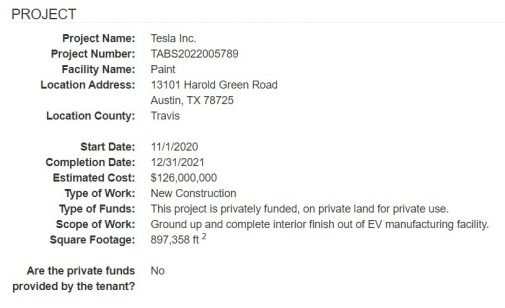 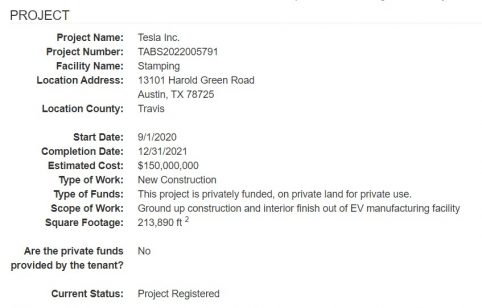 Looking closely at the documents, the start and completion date are both listed, and Tesla indicates in the filings that each of the facilities will be completed on December 31, 2021, which would likely put the start of production in January. Earlier this year during the Tesla Q3 2021 Earnings Call, company CFO Zachary Kirkhorn indicated that it would not be expected for the automaker to begin production in Texas or Berlin this year. Kirkhorn stated it would not be because Tesla is not ready, but because of regulations in each area. Kirkhorn said:

“But that remains our target and all of our plans are oriented around that. We — for — we should not expect for us to deliver cars by the end of 2021 from these factories even if we do produce them — so homologation, regulatory reasons.”

With that being said, it appears that the portions of the Giga Texas facility primed for electric vehicle production are ready, or as close to ready as they will be. Joe Tegtmeyer, a Texas resident and daily visitor of Gigafactory Texas as a drone operator said that Tesla has been producing test vehicles and performing training at the site to begin priming employees.

Gigafactory Texas has been nearing initial production for several months. Photos and videos have been regularly released from the facility that seem to indicate the test runs of Model Y production have been underway since August. Model Y castings were spotted in droves at the facility as recently as September.

Tesla will begin production at Gigafactory Texas with the Model Y, and the Cybertruck will follow in late 2022 if all goes according to plan.