Teslarati has obtained new photos of Tesla Gigafactory 1 showing four newly completed sections on the north and south end sides of the main building, and rapid development taking place around the outer perimeter of the Sparks, Nevada-based battery facility.

Aerial photos of Tesla’s massive production facility were taken on March 17, 2017 by an asset management company that was surveying powerlines in the local area. Nick Ferguson, Senior Vice President at NM Group tells Teslarati that their team was mapping the area using a LiDAR mounted aircraft, with the goal of helping electrical utility companies provide safe and reliable supply of electricity, before coming across the awe-inspiring Gigafactory 1 from above.

“NM Group is an international company providing asset management services to the utilities industry. We were pleased to hear of Tesla investing in our back yard through the Gigafactory and the benefits this brings to the community.” says Ferguson in speaking with Teslarati. Seen in the photos are completed sections D and E located at the north end of the building, and Section F to the south which adjoins the main lobby to Gigafactory 1. Those that attended the Gigafactory Grand Opening Party last year will recall seeing a red Tesla Model 3 placed near the entryway to this lobby.

The newly completed sections represent a significant portion of the $1 billion in construction costs taking place at Gigafactory 1. We reported last month that building permits issued by Storey County Community Development revealed that Tesla was issued 23 new permits between November, 2016 and February of this year. One particular permit called for a $404 million addendum to Section D and Section E, making it the largest single permit issued to date. 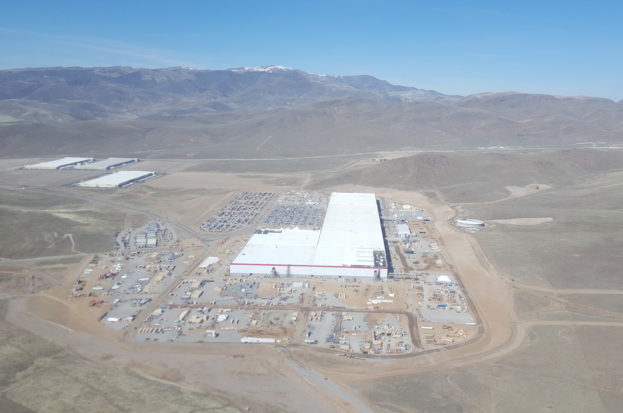 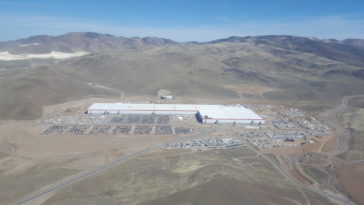 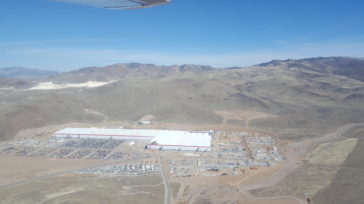 Tesla has not commented on the type of manufacturing taking place at each specific section within the Gigafactory, but we do know that the company had begun mass production of its high performance ‘2170 cell’ early this year. This took place ahead of final completion of Section D and Section E. The new lithium ion cell is being produced in conjunction with Panasonic and being used in Tesla’s commercial and home energy storage systems – Powerpack 2.0 and Powerwall 2.0. The company released a video earlier this year showing 2170 battery cells exiting machinery “faster than bullets out of a machine gun”. This video served as a precursor to the anticipated mass production of Model 3 battery cells slated for the upcoming quarter.

Tesla’s highly anticipated mass market Model 3 was recently spotted driving on the backlot of SpaceX. The final launch event for Model 3 is expected to take place in June, followed by planned production to begin in July.