First Look at the 2021 Tesla Model 3 Heat Pump, and other lesser-known additions

Tesla’s “Refreshed” 2021 Model 3 has been the electric vehicle community’s talk as of lately. The all-electric sedan was close to perfect for many owners, combining affordability with great range and impressive performance specifications. Nothing is “perfect,” but Tesla would try to come as close to it as possible. A recent video from Trevor of the Tesla Owners Online YouTube channel and Twitter account shows other minor changes that have not yet been highlighted or discussed in great detail. Additionally, Trevor highlighted the Model 3’s newest feature, a Heat Pump, which will prove to increase efficiency in the all-electric sedan for years to come.

While the most notable features of the 2021 Model 3 have been discussed on several occasions, like the power liftgate, new center console, and headlight redesign, some lesser-known features have not had much attention. One of these is the addition of the Heat Pump. While the community has talked about it, and Teslarati confirmed earlier this month that it had been added to the new Model 3, the elusive Heat Pump hasn’t been seen inside of the revised sedan on too many occasions. Trevor was sure to remove the frunk from the hood, revealing the Heat Pump.

For those who aren’t familiar, the Heat Pump was first spotted on the initial builds of the Model Y crossover earlier this year. Instead of a classic HVAC system, which transports heat to the cabin, Tesla chose to install a Heat Pump as its efficiency is far greater than the previously-used system. A Heat Pump acts as an A/C unit in reverse. As an air conditioner uses refrigerant to trap heat inside an area and cool it off before moving it outside, a heat pump is equipped with a reversing valve that reverses the refrigerant flow. The Heat Pump disperses heat instead of cold air. The Heat Pump generates 3 kW of thermal energy for every kW of energy used, making it super efficient and increasing range.

Aesthetically, the door sills are now black and do not dawn the words “Model 3” on them any longer. 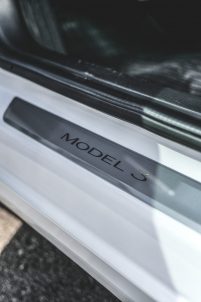 The window controls are no longer gloss or piano, black. This adjustment was also made to the center console storage area. The gloss finish seemed to accumulate dust and fingerprints more frequently than not, requiring owners to tend to their appearance constantly.

Additionally, small icons giving passengers an indication of what the door buttons do have been added. Some third-party companies sold stickers that did this very same thing, but Tesla bypassed this step and added them on the 2021 Model 3.

Along with these features, Tesla added several revisions to improve the quality of the vehicle. Some of these include standard Chrome Delete, metal scroll wheels on the steering wheel, and wireless charging. The new Model 3 is being delivered now, and with the new revisions to the cosmetic appearance and the efficiency of the all-electric sedan, Tesla has improved on one of its best products to date.

Check out Tesla Owners Online’s full video of the Model 3 Refresh below!

First Look at the 2021 Tesla Model 3 Heat Pump, and other lesser-known additions