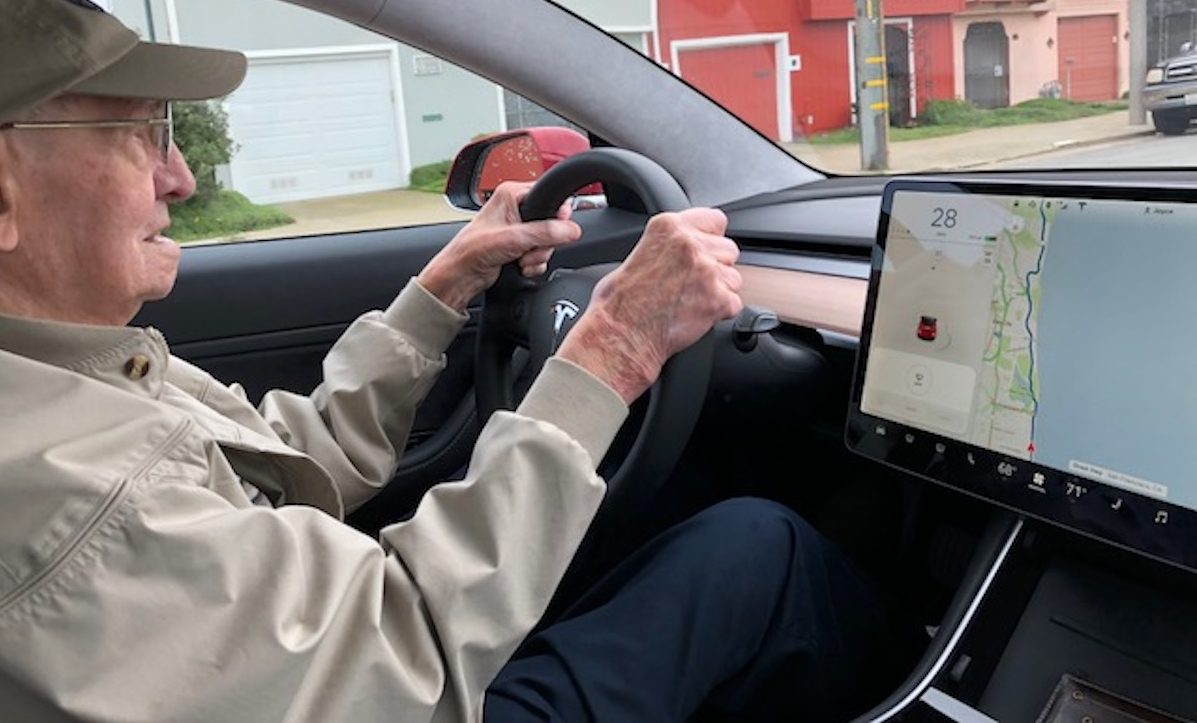 We loved reading the inspirational story about Wesley, age 83, driving his silver metallic Model 3 from California to Florida. My dad Walt Mordenti, age 96, lives in San Francisco. He picked up his red Model 3 (VIN 001388) at the Tesla Factory on December 23, 2017, which possibly makes him the oldest Model 3 owner.

Walt was born in 1921 and began working on cars in 1935 when he needed to help support his family. Since that time, Walt has driven nearly every make and model of American-made cars, and he tells everyone that his Model 3 is by far his favorite car.

Above: Walt picking up his Model 3 at the Tesla Factory (Photo courtesy of Joyce Mordenti)

Walt is a skilled car mechanic, renowned for his knowledge of Hudson automobiles. Some folks refer to him as Doc Hudson, and he was a racing legend in his own right. Walt lived in Connecticut and raced on the East Coast from the 1940s to the 1980s. He is probably best known as an owner/builder/mechanic, who also drove the tow truck and served as the pit crew, usually by himself.

In the 1940s and 50s, he also wrenched on Hudson stock cars with other Waterbury friends: the Mordenti-Mordino-Mambrino trio. I remember the #12 Hudson stock car, affectionately known as The Tank!

Later, when Walt was in his 50s, he added “driver” to his resume at the 1/2-mile high-banked dirt track at Lebanon Valley Speedway, NY in his #36 open-wheel, big-block, AMC-powered, super modified stock car (he used Gremlin and Rambler American bodies, because the body had to match the motor). With great joy, he accepted trophies for rookie of the year and most improved driver!

Above: Walt sharing a moment with Margaret during one of their cross-country Hudson adventures. Note the vanity plate on his Hudson, “OUR 53 HH.” The gentleman from New York who bought Walt’s Hudson also put a vanity plate on the car—“WALTS 53”—in honor of the famous Hudson mechanic Walt Mordenti (Photo courtesy of Joyce Mordenti)

He sold his Hudson in November 2017 to make room in the garage for his Model 3.

Note: Article originally published on evannex.com by Joyce Mordenti — Joyce contacted us to relay the remarkable story of her 96-year old father, Walt Mordenti, after seeing the story of 83-year old Wesley traveling cross-country in his Model 3.