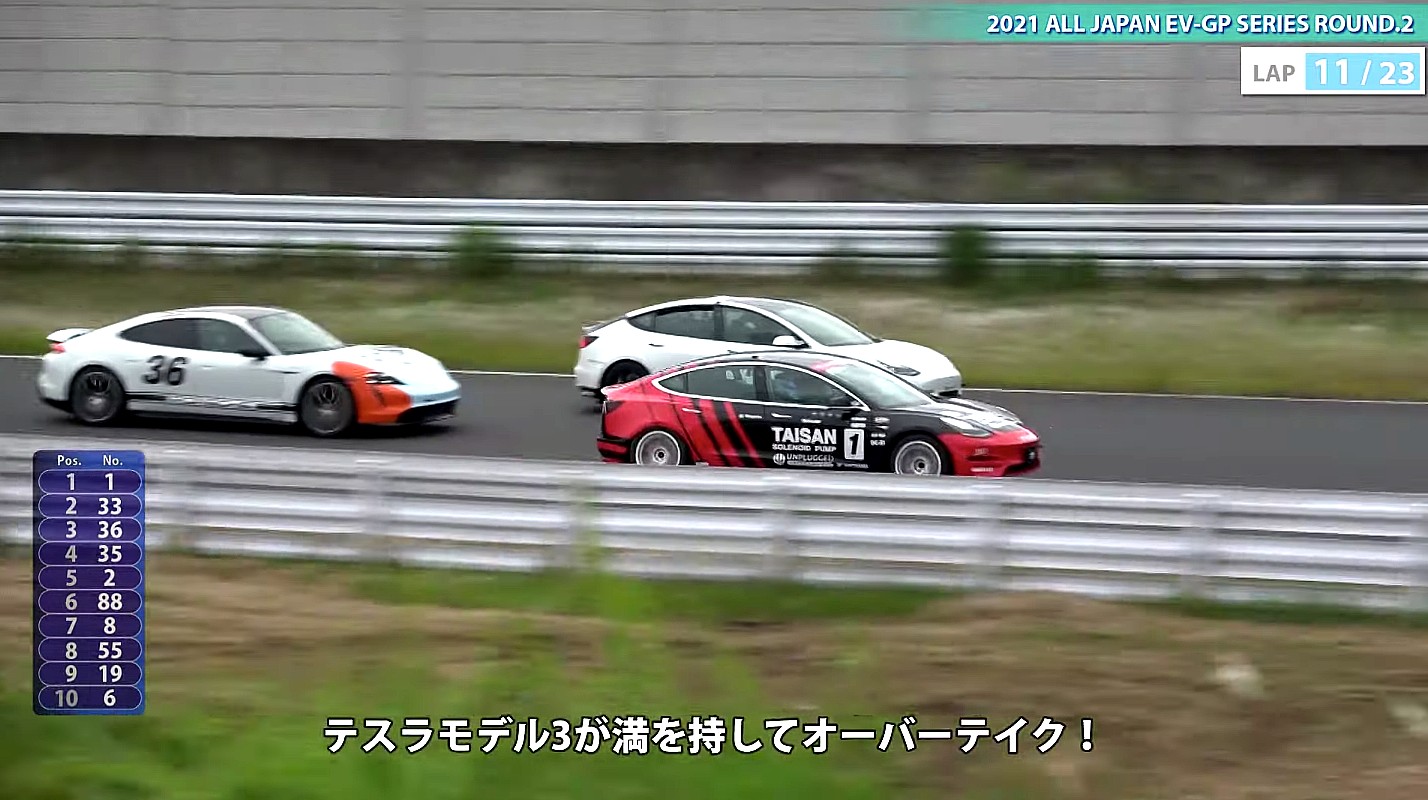 Back when the Porsche Taycan was unveiled, Elon Musk remarked that the Tesla Model 3 Performance would probably win against the German all-electric sports car in an extended race. The CEO’s statement was bold, and it attracted its own fair share of skepticism. Porsche, after all, has tuned the Taycan in the Nürburgring, and the company’s vehicles are known for being monsters on the track.

Teslas, on the other hand, are known for their strong drag race performance. But on the track, even the company’s flagship vehicle then, the Model S Performance, tended to overheat and throttle its power as the race went on. This issue has since been addressed with the Model S Plaid, of course, but back then, a claim such as the one Musk made — even if the Model 3 Performance was equipped with Track Mode — was very bold.

The ongoing 2021 All-Japan EV Grand Prix Series is steadily proving Elon Musk right. Fresh off the Model 3’s stellar performance in the 2020 Grand Prix, the 2021 series’ EV-1 class was unsurprisingly filled with numerous Model 3s. But this year, the Japan Electric Vehicle Race Association (JEVRA) opted to throw a dark horse of sorts in the Grand Prix — the Porsche Taycan Turbo S. With an output of 560 kW, the Taycan Turbo S was the big dog of this year’s series, exceeding the Tesla Model 3’s output by 200 kW.

The Porsche Taycan Turbo S debuted strongly in the Grand Prix’s first round at the Fuji Speedway, breaking away from the competition in the event’s initial laps. The entire race spanned 55 km (34 miles), and for the first half, the Taycan Turbo S absolutely dominated. A Tesla Model 3 Performance with Unplugged Performance parts from Team Taisan tailed the German sports car, but it was still a few seconds behind, losing to the German sports car in the straights. Yet midway through the race, which incidentally coincided with the length of the Nurburgring, the Taycan Turbo S lost significant power, allowing the Tesla Model 3 Performance to overtake it and win the event.

In an interview after the race, the Taycan Turbo S driver described his experience. According to the racer, the all-electric sports car was amazing for about the length of the Nürburgring, but beyond that point, the vehicle’s power loss was significant. He then noted that he and his team at Gulf Racing would do what they can to mitigate the Taycan Turbo S’ power loss issues.

“I opened the window of the very fun electric racing world. I think we still need more and more technological innovation. I think it was a very disappointing result for Porsche fans. I think Porsche did it until they ran the Nürburgring. Beyond that, Porsche has not yet been able to set up for the world beyond 25 km. This is a fact, so it will be improved more and more from now on. I’m sure RS will come out after Turbo S. I want them to send information to Weissach and set it up. We (will) also consider some measures. Thank you,” the driver said.

The second round of the 2021 All-Japan EV Grand Prix was held at the Sodegaura Forest Raceway, and the results were much of the same. The Taycan dominated the first ten laps of the 23-lap, 55-km race, but on the 11th lap, the vehicle lost power once more. This allowed two Tesla Model 3s — one with Unplugged Performance parts and another fitted with Mountain Pass Performance parts — to overtake the Taycan Turbo S in dramatic fashion. The rest of the race was quite shocking, as every Tesla Model 3, including one that seemed to be nearly stock, overtook the Taycan Turbo S.

By the end of the race, Team Taisan’s Tesla Model 3 with Unplugged Performance parts stood in first place, followed by the other four Model 3s in the event. The Porsche Taycan Turbo S, due to its throttling issue, came in at 6th place. Possibly due to these results, the Gulf Racing team adopted a new strategy for the Grand Prix’s third round, which was held last month at the Tsukuba Circuit.

The 2021 All-Japan EV Grand Prix Series’ third round was another 55 km race, and it involved 12 laps around the famous racetrack. This time around, Gulf Racing took its time with the Porsche Taycan Turbo S, pacing itself instead of accelerating like a bat out of hell from the start of the race. This proved quite useful, as the vehicle lasted longer than in the previous two rounds. However, the seemingly inevitable power loss issue emerged once more at the 10th lap.

Because of this, the Porsche Taycan Turbo S never managed to catch Team Taisan’s Model 3 with Unplugged Performance parts, which ended the race in first place once more. This marked the 100th career victory for Yasutsune “Ricky” Chiba, the founder of Team Taisan, as well as Unplugged Performance, whose Tesla tuning capabilities are becoming more and more recognized. Following the Unplugged Model 3 were six other Teslas, one of them being from Gulf Racing.

The 2021 All-Japan EV Grand Prix’s fourth round was recently held at the Sugo International Racing Course. Similar to the other races, the event was a 55-km track race over 16 laps. Team Taisan’s Tesla Model 3 with Unplugged Performance parts proved undefeated by winning the race once more. While the JEVRA has not uploaded a video of the 2020 EV Grand Prix’s fourth round yet, results published in the event’s official website note that the Gulf Racing and its Porsche Taycan Turbo S did not race.

What is rather remarkable is that video feeds from the Model 3s in the races showed that the vehicles’ batteries eventually heated up as well, which meant that for the latter laps, even the Teslas were throttled to some degree. Yet despite these, the Model 3s were still able to soundly beat the Taycan Turbo S, suggesting that Porsche’s power reduction was more prominent than those experienced by its more humble, more affordable competitors.

Watch the first three rounds of the 2021 All-Japan EV Grand Prix in the videos below.